US Blackwater Mercenary Units Behind Kiev Regime’s Outburst in Ukraine By The Voice of Russia Global Research,

US Blackwater Mercenary Units Behind Kiev Regime’s Outburst in Ukraine 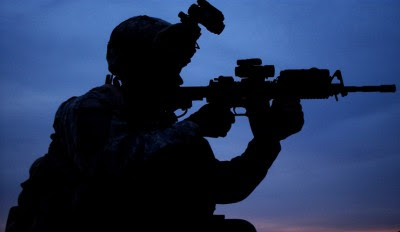 US mercenaries are controlling the repression of pro-Russian protesters in Ukraine’s east by the fascist groups of the NATO puppet regime in Kiev, according to reports emerging from German media. These individuals have been employed on by the group better known in the past as Blackwater, a large private military contracting company established by ex-US Navy SEAL Erik Prince.

However, it is no longer called Blackwater and was renamed Xe in 2009 with a later name change to Academi in 2011. It has changed its name to most likely avoid the negative association attached to its old name, since massacres of civilians in US-occupied Iraq took place under the name Blackwater.
Presently, individuals who are part of this organization are directing the attacks by the fascist Right Sector militia, the Kiev regime’s National Guard, and loads of hooligans have led to casualty numbers in the hundreds throughout eastern Ukraine, according to an article on wsws.org.
The office of German Chancellor Angela Merkel and many other top German officials were sent this sensitive information on April 29. Germany’s Federal Intelligence Service (BND) claimed that 400 Blackwater troops are assisting Kiev’s security troops in Ukraine’s east, which also includes Slavyansk.
As stated on wsws.org, Der Spiegel wrote, “This information reportedly comes from US intelligence services and was communicated during a so-called Intelligence Situation meeting, a regular discussion chaired by Chancellery Chief of Staff Peter Altmaier (CDU). The Presidents of the intelligence services and of the Federal Criminal Office and the intelligence coordinator of the Chancellery as well as high-ranking government officials attended the meeting.”
However, the BND did not disclose who hired the mercenaries, employed by Blackwater now battling it out in Ukraine, but it is believed that they are working very closely with US intelligence. Prince personally said in 2013 that after the US invaded Iraq, his company “became a virtual extension of the CIA.”


Reports from the German government give confirmation to the Russian Foreign Ministry’s allegations a month ago that hundreds of mercenary fighters from Greystone, conveniently a subsidiary of Academi, were directing Right Sector combatants and other pro-Kiev units in Ukraine.
The Russian Foreign Ministry warned that the mere existence and the activities that US mercenaries execute “threaten to trigger civil war.” It then alleged that English-speaking fighters were caught coordinating the fascist individuals along with the hooligans who executed the May 2 massacre of dozens of anti-Kiev regime protesters who were present in Odessa.
For the most part, US news media has blocked the German and Russian reports of Blackwater’s dealings in Ukraine. As part of a news releases on the firm’s website, Academi gave its best attempt at dismissing the latest reports coming out from German government sources as mere “rumors” issued out by ” some irresponsible bloggers and online reporters.”
“Such unfounded statements combined with the lack of factual reporting to support them and the lack of context about the company are nothing more than sensationalistic efforts to create hysteria and headlines in times of genuine crisis,” the firm stated, wsws.org reported in an article.
Academi also felt the need to highlight that it “has no relationship with any entity named Blackwater or with the former owner of Blackwater, Erik Prince.” It then added, “Erik Prince sold the company (which he had renamed ‘Xe’) in 2010 and retained the rights to the Blackwater name.”
In accordance with Academi’s role in US media, which did not care to even report on the company’s denial of the reports issued out by German officials, is seen as living proof that Academi is an active player in Ukraine. Though, it looks very cowardly of the US to not even acknowledge such reports in its mainstream media.