The Nazi Danger — A Letter from Odessa 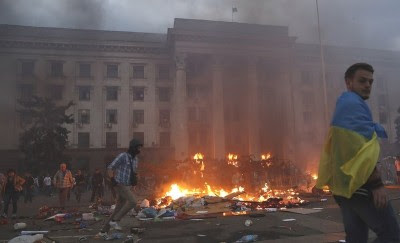 By T., a Teacher from Odessa

I have lived in Odessa since my early childhood and adore this sunny south city with its hospitable and witty people.  Odessa is a multinational city which is reflected in the names of its streets: French and Italian Boulevards, Greek and Bulgarian Streets, Moldavian district, etc.  Odessa was built according to a decree issued by the Russian empress Catherine the Great over 200 years ago as a Russian port city on the Black Sea. And it was constructed by French and Italian architects and engineers invited by Catherine. That is why it is said to resemble Paris …
During the Soviet period Odessa was a part of the Ukrainian SSR – one of the 15 republics comprising the USSR at the time, though it was Russian, both by its population and the language it spoke. But it was not of principal importance for the numerous nations and nationalities living there, as all of them had equal rights and comprised one and the same Soviet people. When I studied at school there were Russians, Ukrainians, Jews and Bulgarians in my class, and it didn’t matter – we were the citizens of one and the same country.
After the USSR collapsed, the Ukrainian Republic became Ukraine and started building its own independent state seeking to prove its self-sufficiency and ability to become a powerful and prosperous state. But it failed. Instead the state succeeded in splitting and embroiling the two people inhabiting it – Ukrainians and Russians. Being a teacher I can definitely state that in 23 years of independence there appeared a generation of young people brought up in a Russophobic spirit. It was made possible due to the anti-Russian policy of the state which tried to shift the discontent of its citizens from itself onto its external neighbour-state – Russia (the so-called “younger-brother syndrome”). But to make hatred to one’s fraternal people a country’s national idea is, to my mind, absurd and a crime against its own people.


Ukraine could be called “an artificial state”. If one takes interest in its history, it will turn out that the state has existed in its present form not so long ago, and consists of heterogeneous parts. One of the major reasons of the present crisis in Ukraine is that the neo-nazi and Russophobic ideology of one of these parts, Galicia, is imposed upon the entire Ukraine. The slogans of the Kiev “Maidan” like “Glory to Ukraine! – Glory to heroes!”, “Nation is above all!”, “Death to enemies!” are the slogan of the nationalists and Bandera-followers from the west of Ukraine. Their enemies are Russians, and their heroes are Bandera, Shukhevich and the like, who were fascists’ henchmen during the last war, and who became notorious for their flagrant atrocities against peaceful population in the west of Ukraine. 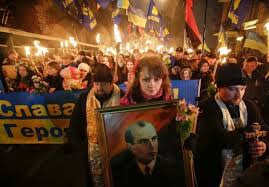 And for Odessa, which heroically fought with [against Hitler] the fascist invaders, for Crimea (which “returned back home to Russia”), as well as for the whole southern and eastern Ukraine, such an ideology is unacceptable and arouses rebuff. There are lots of ethnic Russian and Russian-speaking  people here who are traditionally strongly attached by Russia. So in many cities, Odessa inclusive, people started participating in peaceful protest marches  demanding, in particular, a referendum as to the future state structure arrangement.
They  do not want to be second-rate people, they want to stay on the land where they belong, to speak their native tongue, and to live in peace with their Russian neighbours-brothers, as well as with the whole world. But the Western-backed (US first and foremost)  unelected fascist regime in Kiev does not want to take into account their inalienable right to their culture and national identity, so confrontation and repressions started. The propaganda of the Ukrainian media is stirring up the information war, the journalists trying to tell the truth have to leave the country. The Russian TV channels are cut off. A parliamentary deputy, Oleg Tsaryov, the only presidential candidate who tried to  inform the government and the world public about the opinion of the people living in the south-east, is now subject to criminal prosecution and is being relieved from inviolability of a deputy.
On the Internet there has recently been promulgated the telephone talk between Tsaryov and the second-richest Ukrainian oligarch Kolomoysky (the latter is said to stay behind and pay for organizing the flagrant provocation and massacre in Odessa, as well as for organizing punitive squads for fighting the people’s volunteer corps in the eastern regions of Ukraine), in which Kolomoysky  was threatening Tsaryov and his family.(ref)  As a result, millions of people in the south-east do not feel themselves protected, fear about their future and seek protection and salvation from their brothers-Slavs living in Russia. That’s why the slogans “Russia!”, “No to junta”, “No to fascism!” and “Putin!” were sounding during their peaceful protest marches. These thousands of people are neither “separatists”, nor “terrorists” as they are often called by the pro-Kiev media, they are just peaceful citizens wishing to be heard.
Now the split in Ukraine has turned into a real war against its own people, with a great number of victims. The horrible massacre and the succeeding burning of dozens of people in Odessa is, to my mind, a peak in the fratricidal war. I am neither a politician, an expert, nor an investigator, so I am not to judge exactly what  forces are behind these events. But having read lots of information and opinions on the Internet I understand that it is definitely a provocation in the dirty game of big politicians and oligarchs in their struggle for redivision of the world, power and money. Now only children do not understand that the West does not want to see the truth about the events in Ukraine because the stakes in this game are geopolitical. The fight is for hegemony in the world between Russia and the USA, and Ukraine just happens to be the battlefield between these two “great powers”. It is quite natural that Russia does not want to have NATO “at its door”, and a US naval base deployed in Odessa. Neither do the Russians living here.
Whether the crime in Odessa will be investigated or not, is a big question. I personally am not at all sure of it. But it is impossible to put up with the fact that 48 Odessites (and, by the grapevine, much more) have been burned alive, as in Byelorussian village of Khatyn. We have been seeing their charred bodies while sleeping and have cried our eyes out imagining their sufferings. There has never been such a horrible crime against humanity in Odessa since the war of 1941-1945. My parents were fighting then against Hitler invaders, my father was awarded to many orders and medals, my mother had two medals too – one “For the Defense of Stalingrad”, and another one “For the Victory over Germany in the Great Patriotic War”. So I cannot accept the fact that neo-nazism and fascism as represented by the current junta (and there is no other name for this unlawful and criminal government) is established in Ukraine. After the Odessa Khatyn there will never be a single and united Ukraine. Fascism/nazism is a terrible evil, and if it is not immediately stopped, it will keep growing  and  sprawling like cancer.

I was so glad when, thanks to Olga, I got an opportunity to contact you: now we have some hope to bring the truth about Odessa and Ukraine to the people all over the world.  I would be happy if my letter could at least a little helpful for you in your noble and important activity, that of struggle  for peace.
This article by T was brought to our attention by Bruce Gagnon

Posted by Baldwin Templeton at 3:06 AM