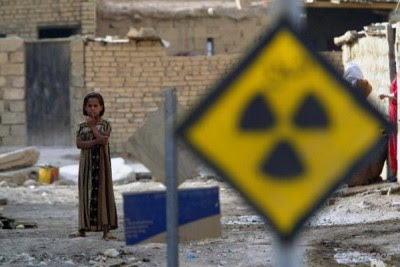 The official environmental authority in the Iraqi governorate of Missan, which is located 390 kilometres away from Baghdad, has announced the discovery of dangerous radioactive contamination that is attributed to the 2003 US-led war on Iraq.
The director of the general authority for the environment in Missan, Samir Kadim, told the New Arab news website that the authority’s specialised staff found radioactive material, mainly in military equipment and the skeletons of cars, in a small village south of Missan known as Karima.
Kadim explained that the ministry’s authority is cautiously entering the three areas where radioactive material was discovered and is taking strict procedures to remove it.
The village witnessed one of the fiercest battles between the former Iraqi army and the US-led coalition forces in 2003.
“Unfortunately, we have discovered it late, after a number of the village’s residents have been diagnosed with various diseases,” Kadim said.
One of the village’s residents told the New Arab in a phone interview that: “Cancer has spread among us, in addition to birth defects among new-born babies and other diseases that doctors cannot explain.”
“But it is only now that we have discovered the cause – it is the US,” said 45-year-old Abboud Moussa.
Moussa described how a number of Karima’s villagers, including children and his own mother, died as a result of this radioactive material. Doctors diagnosed his mother with skin cancer and bone disease, and they told him that she needed to receive medical treatment abroad, but she died very fast before she could travel.
The village’s mayor Mahmoud Abtan told the New Arab that a routine visit to the village by officials from the Ministry of Environment encouraged the villagers to ask them to examine a number of areas that had a bad smell. “A number of animals grazing near those areas have died … people even thought that those areas were possessed. Then it turned out that they are not possessed at all, and our murderer is the US,” he said.

According to Missan’s environment authority, Karima is the third place in the governorate where radioactive material has been discovered amid primitive treatment and an American refusal to take responsibility. Any US assistance in handling the radiation would be an acknowledgement of its use of internationally banned weapons in Iraq.
Abdel Khalek Mahmoud, an environmental expert, told the New Arab that “radioactive contamination in Iraq is divided into two types: The first, which is rarely found in Iraq, is high-level radioactivity that can be discovered by electronic devices. The second is low-level radioactivity, which is more difficult to discover. It was caused by the waste of depleted uranium that was used by the US in its 2003 war on Iraq. This is abundantly found and it has caused a lot of lethal damage in the country.”
“We have often said that the reason why thousands of Iraqi soldiers went missing is that their bodies burnt as a result of uranium-saturated bombs. But the country’s new leaders, who were empowered by the US, were not willing to bother the Americans,” Mahmoud added.
Abdel-Aziz Al-Taey for the New Arab

Posted by Baldwin Templeton at 5:19 PM