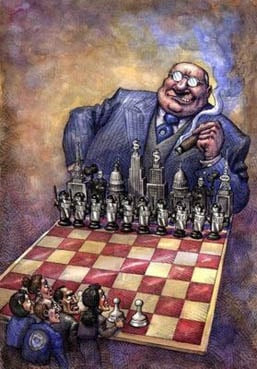 A new study confirms the obvious: the will of the people carries no weight in the United States. Within the nation’s borders democracy is everywhere proclaimed but nowhere to be found. These truths we hold to be self-evident: “ordinary citizens have virtually no influence over what their government does in the United States.”
Too many Americans love to boast that the United States is a democracy. That idea is accepted uncritically and celebrated as proof of this country’s superiority. Every public activity and event is an opportunity for the false narrative to be repeated and indulged. Events as disparate as elections, holiday celebrations, advertisements, school commencements and religious worship are all used to propagandize and create false belief about the degree of power the average citizen has vis a vis their government.
Of course all evidence shows that this narrative is and always was a lie. Dictionaries define democracy as government representing the citizens through elected representatives, or as majority rule, or a society which provides equal rights to all. The history of this country has rarely lived up to any of those descriptions but in the recent past the notion that this country is a democracy has become openly farcical. We have nothing but meaningless trappings and any power exercised by the people is sadly in short supply.
This state of affairs has been obvious to anyone who has been paying close attention. Americans not only don’t get what they want from the political system, they actually get the opposite of what they want. The pace of the oligarchic state has quickened lately but the dynamic has been evident for quite some time.

Even elite academia is taking notice and has given official imprimatur to a conversation that had been ignored. Professors Martin Gilens of Princeton University and Benjamin Page of Northwestern University are the authors of the study “Testing Theories of American Politics: Elites, Interest Groups, and Average Citizens.” While their work does not as news stories suggest use the word oligarchy, the authors are quite clear about their findings. Professor Gilens gave this brief summary of their conclusions:

“I’d say that contrary to what decades of political science research might lead you to believe, ordinary citizens have virtually no influence over what their government does in the United States [italics mine]. And economic elites and interest groups, especially those representing business, have a substantial degree of influence. Government policy-making over the last few decades reflects the preferences of those groups – of economic elites and of organized interests.”
While this study has however briefly changed public discourse, it is important to note that the disregard of popular will is obvious for all to see. If this were not true, the minimum wage would be higher, there would be no cuts to entitlement programs, and Americans would have a single payer health care system. There would be no NAFTA or TPP free trade agreements which force a race to the bottom for workers, destroy entire eco-systems and violate national and popular sovereignty. If this country were truly democratic, the city of Detroit would not have filed for bankruptcy for the simple reason that voters in Detroit and in the state of Michigan voted to repeal the emergency manager law which brought bankruptcy into being.
Americans don’t want the increasingly frequent interventions abroad forced upon by them by president after president yet that is what they get. We want to address the problems created by human made climate change. We don’t want hydraulic fracturing, or the pollution or earthquakes that come with it, but that is what we have. We don’t want rich people to control the political process but the Supreme Court has said time and again that money equals speech and those decisions prove the point of the study. Simply put, money talks and those without money have no voice.
If that were not the case, American workers would not be poorer than their counterparts in the rest of the world. The so-called middle class workers in this country had the distinction of being better off than their peers around the world. That is no longer the case with stagnating wages and job loss and a country that does not practice income distribution that would keep people out of poverty. In a democratic country, Walmart and its low wages would not be the largest employer. The manufacturing that once dominated the economic landscape would still employ the bulk of the work force with its higher wages and other benefits that provide economic security.
In a democracy, the financial services industry that created the worldwide economic meltdown would not have been bailed out. Workers would be bailed out. Corporations wouldn’t get tax breaks and other government subsidies. Workers would get them. And if the average person had any say in the matter, the big time banksters would now be behind bars.
The myth of American democracy is just one of many that are cherished out of ignorance and suspension of disbelief but that is not a reason to continue the confusion and self-delusion. The only time we get any taste of democracy is when we proclaim that we don’t have it but assert plainly and loudly that we intend to get it.
The phony narrative wears thin as the quality of life diminishes. The United States of America is not a democratic nation if the only right that citizens have is to go to a polling place every few years. It is time to stop fetishizing what clearly does not work for the majority of people and start talking about something new. After all, the definition of insanity is doing the same thing over and over but expecting a different result. The only result we have to show is rule by the elites and if that is acceptable then the people have gone truly insane.
Margaret Kimberley‘s Freedom Rider column appears weekly in BAR, and is widely reprinted elsewhere. She maintains a frequently updated blog as well as athttp://freedomrider.blogspot.com. Ms. Kimberley lives in New York City, and can be reached via e-Mail at Margaret.Kimberley(at)BlackAgendaReport.com.

Posted by Baldwin Templeton at 2:47 AM