Argentine Church Under the Shadow of the Dirty War 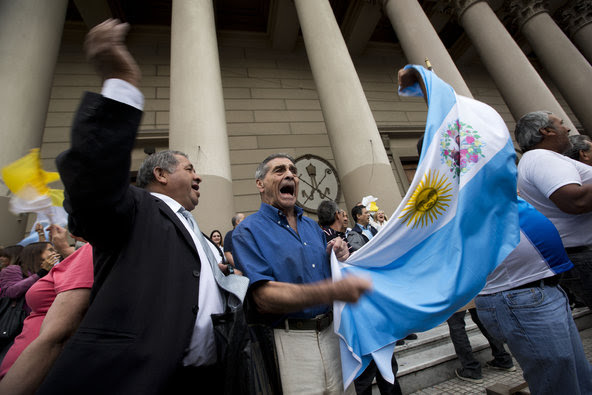 Victor R. Caivano/Associated PressArgentines celebrated the election of Pope Francis at the Metropolitan Cathedral in Buenos Aires on Wednesday.
LONDON — The election of an Argentine to the papacy has revived a polemic about the role of the Roman Catholic Church during his country’s so-called “dirty war” and about his own dealings with a military junta that murdered up to 30,000 citizens.
Jorge Mario Bergoglio was head of the Jesuits in Argentina between 1973 and 1979, a period that saw the worst excesses of a campaign of repression that targeted real and perceived opponents of the military dictatorship, including radical clerics.
The Argentine justice system has conducted numerous investigations into the junta’s crimes and no personal blame has been attached to Pope Francis, but the church in Argentina continues to live under the shadow of the dirty war.
As recently as last December, a provincial tribunal denounced the “complicity” of the church in the human rights violations of the dictatorship and a continued reticence on behalf of church authorities and clerics to throw light on such crimes.
It was a dark period for the country and the church, as a junta headed by Gen. Jorge Rafael Videla, an ultra-traditionalist Catholic, employed torture and murder in a self-declared crusade against godless communism.


The victims included priests and seminarians who worked with the poor. Two French nuns were among those who were thrown alive from aircraft into the South Atlantic.
With Cardinal Bergoglio’s elevation as Pope Francis, questions have once more been raised about how much he knew of the abuses and how much he did to try to prevent them.
The controversy stems from an accusation in 2010 by Horacio Verbitsky, a journalist and former leftist guerrilla, that the Jesuit leader had withdrawn his protection from two fellow priests who were subsequently kidnapped and tortured in 1976. They were later released.
Cardinal Bergoglio told a tribunal in 2010 that he had met with General Videla and his deputy, Adm. Emilio Massera, to plead for the lives of the abducted clerics.
He was also called to testify in a case that involved the forced adoption of babies born to female detainees, a phenomenon he said he was unaware of until years after the fact.
The future pope told his biographer he had helped to hide potential targets of the junta and “I did what I could, given my age and my limited contacts, to plead on behalf of those who had been seized.”
Adolfo Pérez Esquivel, a human rights activist and Nobel Peace Prize laureate, was among those who leapt to the defense of the new pope.
He told the BBC his fellow Argentine had no links to the military dictatorship. “There were bishops who were complicit, but not Bergoglio,” he said in an interview.
“I personally know many bishops who called on the military junta to free prisoners and priests and whose pleas were rejected.”
Although some clerics actively helped the military by attending secret detention centers at which suspects were tortured, the main charge against the church is that it was guilty of the sin of omission by failing to do enough to help those in need.
Argentine Catholic leaders have long admitted the church’s failings during the dirty war. As archbishop of Buenos Aires, Cardinal Bergoglio last year led bishops in an acknowledgment of the church’s failure to protect its flock during the 1970s.
However, the statement angered some human rights activists by placing equal blame for the violence on the military and its opponents.
The statement was in part a response to trial testimony by General Videla in which he spoke of the Church’s cooperation during the dirty war and boasted of his “excellent, very cordial, sincere and open” relationship with its leaders.
Posted by Baldwin Templeton at 2:24 PM