Hold on to your Hat By Kevin Duffy from LewRockwell

Hold on to your Hat

“Buy on the rumor, sell on the news,” goes the old investing saw.  Stocks are a discounting mechanism, which is why they act so perversely, often rallying after headlines turn gloomy and declining when news is glowing. 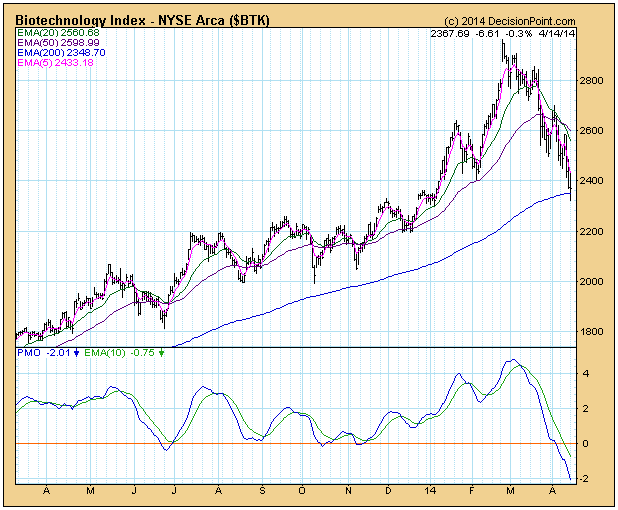 It isn’t often that financial bubbles burst, so the recent carnage in so-called momentum stocks ought to be front page news.  Former highflyers Tesla Motors, Netflix, Twitter, and 3D Systems are 24%, 28%, 45% and 50% off their recent highs respectively.  Biotechnology stocks are in official bear market territory, down 21%.  Gracing the covers of popular business magazines, one might expect to see an irritated bear, dejected trader, or stock chart headed south, background in black.  Yet a quick scan of the financial headlines this past weekend shows little concern:
The common theme among investment pundits is that the momentum bust is isolated, contained, healthy, and even predictable.  CNBC interviewed a market strategist at RBC Capital:


“I think the selloff is probably over.  If you look at the economically sensitive stuff in the market, it’s not really selling off. It’s tech. It’s bio-tech [which makes up about 10 percent of the market.]  The other 85 to 90 percent is in perfectly fine shape.”

On the cover of its latest issue, Barron’s patted itself on the back for anticipating the tech bust several months ago:


In November, when pundits began to natter about a stock market bubble, we pointed out in a prescient cover story that it was a tech bubble, not a market bubble.  Our advice has paid off handsomely.


My guess here is that we’re having a valuation adjustment in one small part of the market, in the highflying momentum stocks that got ahead of themselves and are now correcting.  I think this is more of a buying opportunity.

The article concluded, “All this suggests that despite some ominous headlines, the stock market’s health is still good.”
Where are the ominous headlines?  We don’t see any.  We see complacency as far as the eye can see with the assuredness that the momentum stock bust is “contained.”  We heard these same words in April, 2000 after the dot-com bust and March, 2007 after the subprime lending bust… early warning signs that were overwhelmingly ignored.
Recall that in March of 2000, parabolic Internet stocks collapsed, cutting off the steady flow of initial public offering (IPO) money that supported the industry.  Five months later, investors were taking refuge in established companies selling equipment to these very same dot-coms.  A portfolio manager of a popular technology fund reflected the cognitive dissonance on display at the time:


“I guess if I had been in business in northern California during the 1860s, I would have been selling pots and pans and digging tools, rather than panning for gold.  We didn’t want to worry about which of the dot.coms would strike gold.  But we were sure that their suppliers like Cisco, Sun and Juniper would prosper.”

His fund lost 90% of its value over the next two years as the tech-laden Nasdaq 100 Index plunged 77%.
While the mid-2000s housing boom peaked in the first quarter of 2006, the initial cracks in its creditors’ stocks did not appear until March, 2007 with the bursting of the subprime lending bubble.  Again, there was widespread belief that these problems were contained.  Few connected any dots:


Headlines herald a U.S. prime-time, subprime mortgage implosion leading to an upcoming credit-crunch crisis – destined to sink shares, raise interest rates and impale economies. But this is demonstrable nonsense… Fact is, subprime is a relatively small part of the overall debt market and the talk is much ado about little.  ~ Ken Fisher, Fisher Investments, July 17, 2007
[The company's total exposure to subprime loans] is limited, contained, and appropriately marked.  I think the majority of our exposure continues to be now in the highest-credit segment of the market.  ~ Jeff Edwards, chief financial officer, Merrill Lynch, July 17, 2007
All of the problems are in the billions and tens of billions. The global economy is in the tens of trillions.  So these are small problems.  ~ Rich Karlgaard, publisher, Forbes, August 2, 2007

Credit-related stocks, as measured by the Bearing Credit Bubble Index, went on to shed 80% of their value in two years. 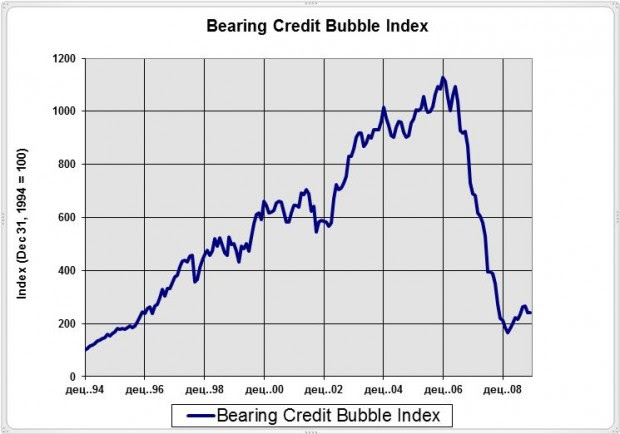 During the stock market crash from August-November, 1929, it was widely felt that business was on sound footing even though speculators were experiencing vertigo:

During the Roaring ‘20s, the connection between the stock market and economy was obvious, yet after the Crash it was assumed that link was broken, if temporarily.  This was thought to be an isolated event.  As it turned out, the tremors on Wall Street were simply warnings of a much greater earthquake to follow.  Over the next 2 ½ years the Dow Jones Industrials Average would lose another 75% from its November, 1929 lows, ushering in the Great Depression. 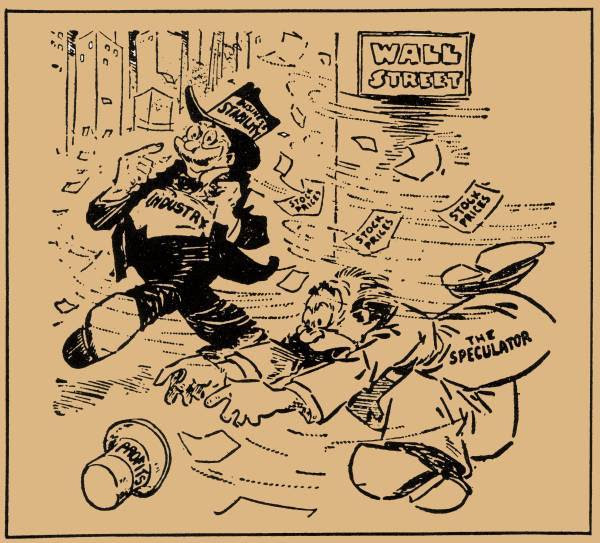 “IT’LL TAKE MORE THAN THAT TO BLOW HIS HAT OFF”
Hanny in the Philadelphia Inquirer
October, 1929
Investment booms reinforce destructive behaviors, not least of which is compulsive gambling.  By the end, few are willing to leave the casino until they bet their last chip.  Faculties that enable objective analysis and synthesis of new information atrophy.  This is precisely the time to grab hold of one’s senses, part ways with the crowd, and pay close attention to the speculative canaries that are dropping like flies.

The Best of Kevin Duffy

Kevin Duffy is a principal of Bearing Asset Management.
Copyright © 2014 by LewRockwell.com. Permission to reprint in whole or in part is gladly granted, provided full credit and a live link are given.
Previous article by Kevin Duffy: Obama Knows…
previous articlenext article