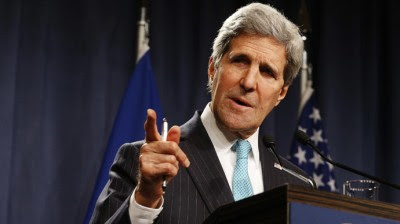 A letter urging the Jews of Donetsk to get registered, which the US Secretary of State cited in Geneva, is a fake says a man whose signature appears on the communication.
Following the four-side meeting on the Ukrainian crisis in Geneva on Wednesday, John Kerry lashed out at a letter that was allegedly sent to Jewish citizens in Ukraine’s eastern town of Donetsk, asking them to register and report all their property, or be stripped of citizenship and face expulsion.
“In year 2014, after all of the miles traveled in all the journey of history, this is not just intolerable, it’s grotesque… beyond unacceptable,” he stated.
Images of the letter have been circulating online.

The letter was stamped and signed by Denis Pushilin, who was identified on it as the “People’s Governor.”
However, Pushilin denied he had anything to do with the letter, claiming it was a fake.
“There are similar letters not only addressed to Jews, but also to businessmen, foreign students, people of certain other occupations,” he told RT. “This is actually a fake, and not a good one. There’s a sign “People’s Governor”. First of all, no one calls me by that title, no one elected me. Secondly, the stamp is the former mayor’s. Everything’s photoshopped.”
Pushilin added that sensible people can only take what the authors of this “letter” were trying to say with humor. The self-proclaimed Donetsk People’s Republic “is multinational,” he said. “We get along perfectly well here with everyone. And there aren’t any conflicts on national grounds, that’s for sure.”

Although the letter’s authenticity is questionable, the fact that it was mentioned by a top US official has quickly sent the “Letter to Jews” story viral. It struck a very sensitive chord with audiences worldwide and cast a grave shadow over anti-government protesters in Donetsk.
The “letter” story also went ballistic on Reddit. However, its authenticity was seriously questioned and the social network community concluded the document is “almost certainly fake.”
Meanwhile, a Ukrainian MP who has visited the turbulent region, Boris Kolesnikov of the Party of Regions, has urged that information coming from Ukraine should be double-checked.
He believes that Ukrainian law enforcement agencies aren’t being totally honest when they describe the people participating in the protests and claim there are Russian servicemen among them.
Kolesnikov specifically referred to a video which earlier appeared online. In it a man in a military uniform told police officers, who switched sides in the city of Gorlovka and joined protesters, that he was Russian lieutenant-colonel from Simpheropol, Crimea. The man was later identified by Gorlovka residents as the former director of a local cemetery.
“Officially, I’ve only seen one Russian serviceman,” Kolesnikov said. “The next day he appeared to be the ex-director of the Gorlovka cemetery, fired 2 years ago for selling 38 fences, stealing a monument and extorting money from old women for new graves. There are Interior Ministry and intelligence services in the country, which should give us truthful information.”
He added it was quite obvious that the protesters in Donetsk did not represent any danger to civilians and called for negotiations with the activists. These talks would explain Kiev’s position and that the government is ready to make amendments to the constitution.
The US appears to be relying on information from Kiev, while ignoring alternative points of view. And so it seems that a top US official picked up and railed about a letter of questionable authenticity.
Earlier in April, spokesperson for the US Department of State, Jen Psaki, said that protest events in eastern Ukraine “appeared to be a carefully orchestrated campaign with Russian support.”
She was then asked if the department was only relying on Kiev in its assessment of the situation, or was using some independent sources.
“Well, of course we remain very closely in touch with the Ukrainian Government, and that’s who we work closely with, and of course, they are on the ground, so their information is often very relevant and current,” was the reply.

Posted by Baldwin Templeton at 4:32 AM