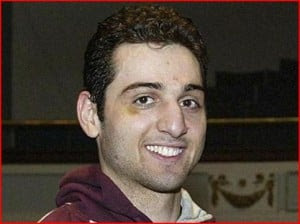 On the eve of the first anniversary of the Boston Marathon bombings, the New York Times Thursday published an article dedicated to whitewashing the failure of the FBI and other US intelligence agencies to detect and stop the perpetrators. This was despite warnings issued by the Russian government that Tamerlan Tsarnaev, now described as the ringleader of the attack, posed a serious threat of terrorism.
The article is based upon interviews with unnamed “senior American officials” on a report written by the inspector general of the Intelligence Community, the federation consisting of 17 separate US spy agencies.
Still secret, heavily redacted sections of this document are supposed to be made public before next Tuesday, the anniversary of the bombings, which occurred at the finish line of the Boston Marathon last April 15, claiming the lives of three people and wounding 264 others.
Tamerlan Tsarnaev was shot killed in a shootout with police days after the bombing. His younger brother, Dzhokhar, was severely wounded and captured by police. He now faces a trial in which US prosecutors are seeking the death penalty
The thrust of the article—and, according to the Times, of the report itself—is summed up in its headline: “Russia failed to share data on suspect, report says.”
“The Russian government declined to provide the FBI with information about one of the Boston Marathon bombing suspects that would have likely have led to more extensive scrutiny of him at least two years before the attack,” the inspector general’s report claims, according to the Times account.
It quotes one of the unnamed “senior American officials” as stating: “They found that the Russians did not provide all the information they had on him back then, and based on everything that was available the FBI did all that it could.”

Posted by Baldwin Templeton at 4:13 AM