Osteoarthritis, the number one cause of disability in the U.S., is a disease marked by a progressively debilitating stiffness and pain in the joints. The stiffness and pain results from degeneration in the joint cartilage, degeneration in the bone tissue underlying the joints, and bony overgrowth as well. (CDC 2011) The CDC estimates that over 27 million Americans have the condition.


It has long been observed that skeletal fluorosis (a bone disease caused by too much fluoride) can cause symptoms and degenerative changes that closely resemble osteoarthritis. While these arthritic effects were once considered to be confined to those with skeletal fluorosis, recent research shows that fluoride can cause osteoarthritis in the absence of traditionally defined fluorosis.

If conventional methods for detecting skeletal fluorosis continue to be used, many individuals with fluoride-induced osteoarthritis will not receive the correct diagnosis and treatment.

The symptoms of skeletal fluorosis (chronic joint pain and stiffness) mimic the symptoms of osteoarthritis. As an example of this, the following figure displays the findings from a recent Chinese study that investigated the prevalence of osteoarthritic symptoms in populations based on the level of fluoride in the drinking water: 
“because some of the early clinical symptoms resemble those of osteoarthritis, the first clinical phases of skeletal fluorosis could be easily misdiagnosed.” (Petrone 2011).

Fluoride Intake Can Cause Osteoarthritis

This fact was convincingly demonstrated in a recent, well-conducted study by a Chinese research group. (Bao 2003)  In the study, the researchers x-rayed the right hands of adults living in a fluorosis area. They then compared these x-rays with the findings of a nearby non-fluorosis area and the findings of a nationwide study that they had previously conducted. The incidence of osteoarthritis in the fluorosis area was “remarkably higher” than in either the adjacent area or the nation as a whole. According to the researchers, “the osteoarthritis caused by fluorosis differs from ordinary osteoarthritis in severity rather than in nature.”


Fluoride Can Cause Osteoarthritis BEFORE Skeletal Fluorosis Is Evident

For years, U.S. health authorities have assumed that fluoride does not cause arthritic symptoms before the traditional bone changes of fluorosis are evident on x-ray. Recent research strongly suggests that this long-held assumption is in error.
Savas (2001)

Consistent with this Turkish study, a team of Russian researchers have found that fluoride-exposed individuals suffer a significantly elevated rate of osteoarthritis in the absence of radiologically detectable fluorosis in the spine. (Tartatovskaya 1995).  The researchers, who were interested in determining whether fluoride exposure can exacerbate the wear and tear on joints from physical stress, examined two groups of mine workers with job activities that exposed them to significant vibration stress  (e.g., drilling). Workers who were exposed to fluoride dusts were found to have a significantly higher rate of elbow osteoarthritis (48.7% vs. 12.9%) and spondylosis (83.3% vs. 41.1%) than the mine workers not exposed to fluoride dusts.

To test the veracity of these findings, the Russian researchers conducted animal studies where they subjected mice to the isolated and combined effects of vibration and fluoride exposure. As with the mine workers, the mice  exposed to both vibration stress and fluoride experienced a greater frequency and earlier onset of degenerative joint changes than the mice exposed to either factor alone. The Russian researchers thus concluded that fluoride exposure can exacerbate the degenerative effect of physical stress on joints with or without the presence of radiologically detectable skeletal fluorosis.
Czerwinski (1988)

Consistent with the Turkish and Russian studies, a team of Polish researchers examined 2,258 fluoride-exposed workers in the aluminum industry and found high rates of arthritic effects in the absence of fluorosis bone changes. (Czerwinski 1988). Although the researchers could only detect fluorosis by x-ray in 1% of the workers, they found high rates of joint pain in the knee, hip, elbow, shoulder and lumbar spine, with the pains correlating to the duration of fluoride exposure. According to the researchers, “the only characteristic feature” of fluorosis is “multiple-joint involvement,” which “would differentiate fluorosis from monoarticular osteoarthritis, but unfortunately not from multiple-joint osteoarthritis or rheumatoid arthritis.”
Cao (2003)

Even among patients with crippling forms of fluorosis, degenerative joint damage can be the primary radiological finding, not osteosclerosis. In one study, for example, Chinese researchers found that 5 of 19 patients with crippling skeletal fluorosis “presented with mainly articular injury but relatively mild bone pathology.” (Cao 2003). The researchers termed this condition “fluorosis arthropathy.”

The fact that fluoride can cause osteoarthritis in the joints prior to, and in the absence of, detectable osteosclerosis in the spine, highlights the difficulty of diagnosing fluorosis. Since many doctors continue to consider spinal osteosclerosis necessary for a diagnosis of skeletal fluorosis, many cases of fluoride-induced osteoarthritis (“secondary osteoarthritis”) will be misdiagnosed as “primary osteoarthritis,” thus depriving patients of the most effective treatment for the condition (reduction in fluoride exposure).

The difficulty of differentiating between osteoarthritis and early stage skeletal fluorosis was highlighted in a 1995 study by a team of Austrian doctors. (Roschger 1995). In the study, the doctors conducted x-rays of a woman who received high-dose fluoride treatment for 6 years as an experimental treatment for osteoporosis. After the woman sustained multiple spontaneous fractures, the doctors x-rayed her skeleton and measured her bone density. According to the doctors, “radiographs of the skeleton and bone scintigraphy showed degenerative osteoarthritis,” but none of the traditional signs of skeletal fluorosis. It wasn’t until the doctors performed a bone biopsy that the doctors were able to detect the presence of fluorosis. As the doctors noted, “Without bone biopsy we would have failed the correct diagnosis.” Based on this experience, the doctors concluded that “invasive investigation of the skeleton (bone biopsy, histomorphometry, BSEI plus SAXS) is the only diagnostic tool, when skeletal fluorosis is suspected.”

The problem with relying on x-rays to detect and prevent joint pathologies caused by fluoride is yet further demonstrated in the following figure. The figure presents the findings of a study from one of China’s most pre-eminent experts (Changqing Huang) on the diagnosis of skeletal fluorosis. As can be seen, many individuals diagnosed with fluorosis (based on detailed clinical examinations) did not have radiologically detectable fluorosis on x-ray. 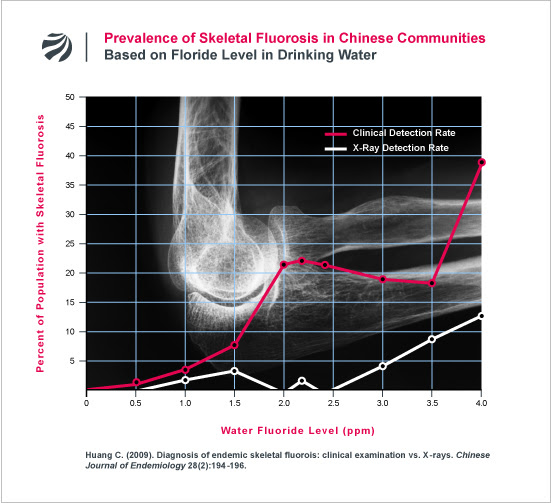 SOURCE: Kumar SP, Harper RA. (1963). Fluorosis in Aden. British Journal of Radiology 36: 497-502.
Mechanisms by which fluoride can cause osteoarthritis:
1) Degradation and Calcification of Cartilage:

“Fluoride mainly affects bone metabolism. However, cartilage is one of its deposition areas. In an animal study, it was shown that excessive fluoride ingestion caused necrosis of articular chrondocytes, ulcer formation, and articular calcification.”
SOURCE: Savas S, et al. (2001). Endemic fluorosis in Turkish patients: relationship with knee osteoarthritis. Rheumatology International 21(1):30-5.
“NaF [sodium fluoride] produces abnormal collagen fibres which provide an abnormal environment for calcification. The formation of defective collagen fibres during fluoride poisoning may explain the development of neobone in fluorosis. NaF is suggested to interfere with maturation of collegen fibres by exerting an adverse effect on cross-link precursors.”
SOURCE: Sharma YD. (1982). Effect of sodium fluoride on collage cross-link precursors. Toxicology Letters 10:97-100.
“It is concluded that fluoride, ingested in excessive amounts, increases the solubility and degradation of collagen and reduces the collagen biosynthesis and cross-links. Therefore, the matured tissue collagen fibers would be abnormal due to inadequate cross-linking.”
SOURCE: Sharma YD. (1982). Variations in the metabolism and maturation of collagen after fluoride ingestion. Biochimica et Biophysica  Acta 715:137-41.
“[I]t is postulated that fluoride activates the calcification of cartilage.”
SOURCE: Bang S, et al. (1985). Distribution of fluoride in calcified cartilage of a fluoride-treated osteoporotic patient. Bone 6: 207-210.
“In general, the metabolic patterns of osteoblasts, ameloblasts, odontoblasts, and chrondoblasts are sufficiently similar so that disturbances of cartilage might be expected… To date, any osteoarthritis observed in fluoride-treated cattle has been regarded as an unrelated process. However, excessive remodeling of the subchondral plate and cancellous end of the bone, such as occurs in osteofluorosis, will eventually lead to remodeling of the articular cartilage. Excessive cartilage remodeling leads to osteoarthritis of normal joints. Therefore, both the mechanical effects of fluoride induced remodeling and the direct action of fluoride on cartilage cells might alter cartilage. The fluoride levels and remodeling circumstances necessary to produce cartilage alteration in cattle – if it occurs – remain to be established.”
SOURCE: Johnson LC. (1965). Histogenesis and mechanisms in the development of osteofluorosis. In: H.C.Hodge and F.A.Smith, eds : Fluorine chemistry, Vol. 4. New York, N.Y., Academic press (1965) 424-441.
2) Enlargement of Bone Tissue (Osteosclerosis & Bony Outgrowths):

“Osteoarthritis, osteonecrosis, and fractures can occur [in skeletal fluorosis] as a result of the marked bone hardness. Some bone changes can imitate a seronegative arthritis.”
SOURCE: Kalia LV, et al. (2010). Thoracic myelopathy from coincident fluorosis and epidural lipomatosis. Can. J. Neurol. Sci. 37:276-78.
“Studies directed toward correlating fluoride-induced increases in bone density with non-fatal diseases, such as osteoarthritis, should be conducted.”
SOURCE: Prival MJ. (1972). Fluorides and human health. Center for Science in the Public Interest, Washington D.C.

Posted by Baldwin Templeton at 2:59 PM