The Fukushima Endgame: The Radioactive Contamination of the Pacific Ocean By Prof Michel Chossudovsky Global Research

The Fukushima Endgame: The Radioactive Contamination of the Pacific Ocean 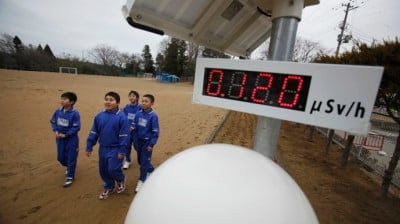 Nuclear radiation resulting from the March 2011 Fukushima disaster –which threatens life on planet earth– is not front page news in comparison to the most insignificant issues of public concern, including the local level crime scene or the tabloid gossip reports on Hollywood celebrities.
The shaky political consensus both in Japan, the U.S. and Western Europe is that the crisis at Fukushima has been contained.
The truth is otherwise. Known and documented, the ongoing dumping of highly radioactive water into the Pacific Ocean constitutes a potential trigger to a process of global radioactive contamination.
This water contains plutonium 239 and its release into the Ocean has both local as well as global repercussions.  A microgram of plutonium if inhaled, according to Dr. Helen Caldicott, can cause death:


Certain isotopes of radioactive plutonium are known as some of the deadliest poisons on the face of the earth. A mere microgram (a speck of darkness on a pinhead) of Plutonium-239, if inhaled, can cause death, and if ingested, radioactive Plutonium can be harmful, causing leukemia and other bone cancers.
“In the days following the 2011 earthquake and nuclear plant explosions, seawater meant to cool the nuclear power plants instead carried radioactive elements back to the Pacific ocean. Radioactive Plutonium was one of the elements streamed back to sea.” (decodescience.com).

It would appear that the radioactive water has already penetrated parts of the Japanese coastline:


Environmental testing of shoreline around the nuclear plant (as well fish, especially Tuna) showed negligible amounts of Plutonium in the seawater. The Plutonium, from what little is reported, sank into the sediments off the Japanese coast.”  (Ibid)


A recent report suggests that the Japanese government is intent upon releasing the remaining radioactive water into the Ocean. The proposed “solution” becomes the cause of radioactive contamination of both the Japanese coastline as well as the Pacific Ocean, extending to the coastline of North America.
While the chairman of the Nuclear Radiation Authority recognizes that the water in the tanks is heavily “tainted”, a decision has nonetheless been taken to empty the tanks and dump the water into the Ocean:

The head of Japan’s nuclear watchdog said contaminated water stored at the crippled Fukushima No. 1 nuclear power plant should be released into the ocean to ensure safe decommissioning of the reactors.
Shunichi Tanaka, the chairman of the Nuclear Regulation Authority, made the comment Dec. 12 after visiting the facility to observe progress in dismantling the six reactors. The site was severely damaged in the tsunami generated by the 2011 earthquake.
“I was overwhelmed by the sheer number of tanks (holding water tainted with radioactive substances),” Tanaka told reporters, indicating they pose a danger to decommissioning work. “We have to dispose of the water.”
With regard to expected protests by local fishermen over the discharge, Tanaka said, “We also have to obtain the consent of local residents in carrying out the work, so we can somehow mitigate (the increase in tainted water).”
Tanaka has said previously that to proceed with decommissioning, tainted water stored on the site would need to be released into the sea so long as it had been decontaminated to accepted safety standards.
“While (the idea) may upset people, we must do our utmost to satisfy residents of Fukushima,” Tanaka said, adding that the NRA would provide information to local residents based on continuing studies of radioactive elements in local waters.
The inspection tour was Tanaka’s second since he became NRA chief in September 2012. He last visited in April 2013.
During his visit, Tanaka observed work at a trench on the ocean side of the No. 2 reactor building, where highly contaminated water is being pumped out. He also inspected barriers set up around the storage tanks to prevent leaks of tainted water.
Tanaka praised the completion in November of work to remove all spent nuclear fuel from the No. 4 reactor building, as well as changes to work procedures that he said allows for the completion of the work at the No. 2 reactor trench.  Hiromi Kumai , NRA Head Signals Massive Release of Tainted Water to Help Decommission Fukushima Site Asahi Shimbun December 13, 2014

The contradictory statements of  the NRA chief  avoid addressing the broader implications, by giving the impression that the issue is local and that local fishermen off the Fukushima coast will be consulted.
Additional articles and videos on Fukushima and Nuclear Radiation are available at Global Research’s Dossier on The Environment
TEXT BOX
Nuclear Radiation: Categorization
At Fukushima, reports confirm that alpha, beta, gamma particles and neutrons have been released:


“While non-ionizing radiation and x-rays are a result of electron transitions in atoms or molecules, there are three forms of ionizing radiation that are a result of activity within the nucleus of an atom.  These forms of nuclear radiation are alpha particles (α-particles), beta particles (β-particles) and gamma rays (γ-rays).
Alpha particles are heavy positively charged particles made up of two protons and two neutrons.  They are essentially a helium nucleus and are thus represented in a nuclear equation by either α or

particles are just electrons that have been ejected from the nucleus.  This is a result of sub-nuclear reactions that result in a neutron decaying to a proton.  The electron is needed to conserve charge and comes from the nucleus.  It is not an orbital electron.

particles are positrons ejected from the nucleus when a proton decays to a neutron.  A positron is an anti-particle that is similar in nearly all respects to an electron, but has a positive charge.  See the Beta Decay page for more information on beta particles.
Gamma rays are photons of high energy electromagnetic radiation (light).  Gamma rays generally have the highest frequency and shortest wavelengths in the electromagnetic spectrum.  There is some overlap in the frequencies of gamma rays and x-rays; however, x-rays are formed from electron transitions while gamma rays are formed from nuclear transitions. See the Gamma Rays  for more” (SOURCE: Canadian Nuclear Association)
“A neutron is a particle that is found in the nucleus, or center, of atoms. It has a mass very close to protons, which also reside in the nucleus of atoms. Together, they make up almost all of the mass of individual atoms. Each has a mass of about 1 amu, which is roughly 1.6×10-27kg. Protons have a positive charge and neutrons have no charge, which is why they were more difficult to discover.” (SOURCE: Neutron Radiation)

“Many different radioactive isotopes are used in or are produced by nuclear reactors. The most important of these are described below:
1. Uranium 235 (U-235) is the active component of most nuclear reactor fuel.
2. Plutonium (Pu-239) is a key nuclear material used in modern nuclear weapons and is also present as a by-product in certain reprocessed fuels used in some nuclear reactors. Pu-239 is also produced in uranium reactors as a byproduct of fission of U-235.
3. Cesium (Cs-137 ) is a fission product of U-235. It emits beta and gamma radiation and can cause radiation sickness and death if exposures are high enough. …
4. Iodine 131 (I-131), also a fission product of U-235, emits beta and gamma radiation. After inhalation or ingestion, it is absorbed by and concentrated in the thyroid gland, where its beta radiation damages nearby thyroid tissue  (SOURCE: Amesh A. Adalja, MD, Eric S. Toner, MD, Anita Cicero, JD, Joseph Fitzgerald, MS, MPH, and Thomas V. Inglesby MD, Radiation at Fukushima: Basic Issues and Concepts, March 31, 2011)

Fukushima Crisis Continues, Worse Than First Reported - Effects More Lingering than Hiroshima or Nagasaki?Nobody in the world knows how to dispose of radioactive waste safely and permanently. That’s a given. The Japanese central government is presumably aware that anything it does with still the unmeasured but vast amount of radioactive waste from ...

The Fukushima Crisis Prevails, Worse than Before. Failures in the Disposal of Radioactive WasteNobody in the world knows how dispose of radioactive waste safely and permanently. That’s a given. The Japanese central government is presumably aware that anything it does with still the unmeasured, but vast amount of radioactive waste from Fukushima’s ...

Fukushima: Worse than You Know: Tepco Has No Idea How to Stabilize the ReactorsYou’ve heard bad news about Fukushima recently.But it’s  worse  than you know.The Wall Street Journal notes that radiation levels  outside  the plant are  likely higher than  inside  the reactor : NRA [Nuclear Regulation Authority] officials said highly contaminated water ...

Fukushima: Radioactivity in the Pacific Ocean, Diluted, But Far from Harmless"With contaminated water from Japan’s crippled Fukushima nuclear complex continuing to pour into the Pacific, scientists are concerned about how that radioactivity might affect marine life. Although the ocean’s capacity to dilute radiation is huge, signs are that nuclear ...
626  118  16  1492
Articles by: Prof Michel Chossudovsky

Michel Chossudovsky is an award-winning author, Professor of Economics (emeritus) at the University of Ottawa, Founder and Director of the Centre for Research on Globalization (CRG), Montreal and Editor of the globalresearch.ca website. He is the author of The Globalization of Poverty and The New World Order (2003) and America’s “War on Terrorism”(2005). His most recent book is entitled Towards a World War III Scenario: The Dangers of Nuclear War (2011). He is also a contributor to the Encyclopaedia Britannica. His writings have been published in more than twenty languages. He can be reached at crgeditor@yahoo.com
Disclaimer: The contents of this article are of sole responsibility of the author(s). The Centre for Research on Globalization will not be responsible for any inaccurate or incorrect statement in this article. The Center of Research on Globalization grants permission to cross-post original Global Research articles on community internet sites as long as the text & title are not modified. The source and the author's copyright must be displayed. For publication of Global Research articles in print or other forms including commercial internet sites, contact: publications@globalresearch.ca
www.globalresearch.ca contains copyrighted material the use of which has not always been specifically authorized by the copyright owner. We are making such material available to our readers under the provisions of "fair use" in an effort to advance a better understanding of political, economic and social issues. The material on this site is distributed without profit to those who have expressed a prior interest in receiving it for research and educational purposes. If you wish to use copyrighted material for purposes other than "fair use" you must request permission from the copyright owner.
For media inquiries: publications@globalresearch.ca

Posted by Baldwin Templeton at 4:34 AM