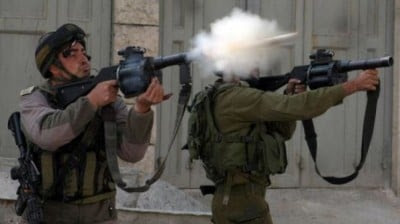 Defying a consensus that it is a priority by the world community comprising international rivals like the United States, Europe, Russia and China and regional rivals like Iran, Syria and Saudi Arabia, Israel, like Turkey, does not eye the U.S. – led war on the IS as its regional priority. Nor fighting Israel is an IS priority.
The Israeli top priority is to dictate its terms to Syria to sign a peace treaty with Israel before withdrawing its forces from the occupied Syrian Golan Heights, Palestinian territories and Lebanese southern lands.
For this purpose, Israel is determined to break down the Syria – Iran alliance, which has been the main obstacle preventing Israel from realising its goals. Changing the ruling regime in either Damascus or Tehran would be a step forward. Towards this Israeli strategic goal the IS could not be but an Israeli asset.
“To defeat ISIS (The Islamic State in Iraq and Syria as the IS was previously known) and leave Iran as a threshold nuclear power is to win the battle and lose the war,” Prime Minister Benjamin Netanyahu told the UN General Assembly last September.
Therefore, “it should not come as a surprise that the (Benjamin) Netanyahu government has not yet taken any immediate steps against IS,” according to Amos Harel, writing in Foreign Policy on September 15.

However, information is already surfacing that Israel is “taking steps” in the opposite direction, to empower the IS and other terrorist groups fighting and infighting in Syria .
Israeli daily Haaretz on last October 31 quoted a “senior Northern Command officer” as saying that the U.S. – led coalition


“is making a big mistake in fighting against ISIS … the United States, Canada and France are on the same side as Hezbollah, Iran and [Syrian President Bashar al] Assad. That does not make sense.”

Regardless, on September 8 Israeli daily The Jerusalem Post reported that Israel has provided “satellite imagery and other information” to the coalition. Three days later Netanyahu said at a conference in Herzliya: “Israel fully supports President [Barack] Obama’s call for united actions against ISIS … We are playing our part in this continued effort. Some of the things are known; some of the things are less known.”
Obama’s call was the green light for Israel to support Syrian and non- Syrian rebels. Syrian official statements claim that Israel has been closely coordinating with the rebels.
Israeli statements claim theirs is confined to “humanitarian” support to “moderate” Syrian opposition, which the U.S. has already pledged to train and arm in Saudi Arabia , Jordan and Turkey . A significant portion of the $64 billion earmarked for conflicts abroad in the budget legislation signed by Obama on December 19 will go to these “moderates.”
Both Israel and the U.S. have no headaches about whether the “moderates” would remain as such after being armed with lethal weapons or whether it remains appropriate to call them “opposition.”
But the Israeli “humanitarian” claim is challenged by the fact that Israel is the only neighbouring country which still closes its doors to Syrian civilian refugees while keeping its doors wide open to the wounded rebels who are treated in Israeli hospitals and allowed to return to the battle front after recovery.
IS close to Israeli borders
The Israeli foreign ministry on last September 3 confirmed that the U.S. journalist Steven Sotloff whom the IS had beheaded was an Israeli citizen as well. In a speech addressed to Sotloff’s family, Netanyahu condemned the IS as a “branch” of a “poisonous tree” and a “tentacle” of a “violent Islamist terrorism.”
On the same day Israeli Defense Minister Moshe Ya’alon officially outlawed the IS and anyone associating with it.
On September 10, Netanyahu convened an urgent security meeting to prepare for the possible danger of the IS advancing closer to the Israeli border, a prospect confirmed by the latest battles for power between the IS and the al – Nusra Front on the southern Syrian – Lebanese borders and in southern Syria , within the artillery range of Israeli forces.
On November 9, Ansar Bait al-Maqdis (ABM), which has been operating against the Egyptian army, released an audio clip pledging allegiance to the IS to declare later the first IS Wilayah (province) in the Egyptian Sinai Peninsula, south of Israel .
On last November 14 The Israeli Daily quoted Netanyahu as saying in a private defense meeting that the IS is “currently operating out of Lebanon … close to Israel’s northern border. We must take this as a serious threat.”
However, “in truth, as most of Israel’s intelligence community has been quick to point out, there are no signs that anything of the sort is actually happening,” according to Amos Harel, writing in Foreign Policy five days later.
Moshe Ya’alon told journalists in September that “the organization operates far from Israel ” and thus presents no imminent threat. Israeli peace activist Uri Avnery, on November 14, wrote: “The present and former generals who shape Israel ‘s policy can only smile when this ‘danger’ is mentioned.”
Israel “certainly does not see the group as an external threat” and the “Islamic State also does not yet pose an internal threat to Israel,” according to Israeli journalist and Associate Policy Fellow at the European Council on Foreign Relations,  Dimi Reider, writing in a Reuters blog on last October 21.
What Netanyahu described as a “serious threat” in the north does not yet dictate any Israeli action against it because “we must assume that Hizballah,” which is allied to Syria and Iran , “does not have its house in order,” according to the Israeli premier.
The presence of the IS Wilayah on its southern border with Egypt is preoccupying the country with an internal bloody anti-terror conflict that would prevent any concrete Egyptian contribution to the stabilization of the Arab Levant or support to the Palestinians in their struggle to end the Israeli occupation of their land, let alone the fact that this presence is already pitting Egypt against Israel’s archenemy, Hamas, in the Palestinian Gaza Strip and creating a hostile environment that dictates closer Egyptian – Israeli security coordination.
Therefore, Israel is not going to “interfere” because “these are internal issues of the countries where it is happening.” Israel is “informally … ready to render assistance, but not in a military way and not by joining the ( U.S. – led) coalition” against the IS, according to the deputy head of the Israeli embassy in Moscow , Olga Slov, as quoted by Russian media on November 14.
Jordan is another story
However, Israel ’s eastern neighbours in Jordan and Syria seem another story.


“ Jordan feels threatened by IS. We will cooperate with them one way or another,” ambassador Slov said. Jordanian media has been reporting that more than 2000 Jordanians had already joined al-Qaeda splinter the IS, al-Qaeda’s branch al-Nusra Front or other rebels who are fighting for an “Islamic” state in Syria . Hundreds of them were killed by the Syrian Arab Army.
The Daily Beast on last June 27 quoted Thomas Sanderson, the co-director for transnational threats at the Center for Strategic and International Studies, as saying that Israel considers the survival of Jordan as “a paramount national security objective.”

If Jordan requested Israeli assistance in protecting its borders, Israel would have “little choice” but to help, the Beastquoted the director of the Israeli National Security Council, Yaakov Amidror, as saying.
As a precaution measure, Israel is building now a 500-kilometre “security fence” on its border with Jordan.
While Israel is willing and getting ready to “interfere” in Jordan , it is already deeply interfering in Syria , where the real battle has been raging for less than four years now against terrorists led by the IS.
A few weeks ago The Associated Press reported that the IS and the al-Nusra had concluded an agreement to stop fighting each other and cooperate on destroying the U.S. – trained and supported rebels (The Syrian Revolutionaries Front and the Hazm movement) as well as the Syrian government forces in northern Syria.
But in southern Syria all these and other terrorist organizations are coordinating among themselves and have what Lt. Col. Peter Lerner, a spokesman for the Israeli Occupation Forces (IOF) called “a gentleman’s agreement” with Israel across the border, according to Colum Lynch in Foreign Policy on June 11.
Last October, Al-Qaeda branch in Syria , al-Nusra, was among the rebel groups which overtook the only border crossing of Quneitra between Syria and the Israeli – occupied Golan Heights . Israel has yet to demonstrate its objection.
“Many Sunnis in Iraq and the Gulf consider ISIS a bullet in their rifles aimed at Shiite extremism, in their bid to restore their lost standing,” Raghida Dergham, a columnist and a senior diplomatic correspondent for the London – based Arabic Al-Hayat daily, wrote in the Huffington Post on September 19.
A political public agreement between Israel and the Gulf Arabs has developed on a mutual understanding that the dismantling of the Syria – Iran alliance as a prelude to a “regime change” in both countries is the regional priority, without loosing sight of the endgame, which is to dictate peace with Israel as the regional power under the U.S. hegemony. The IS is “the bullet in their rifles.” From their perspective, the U.S. war on the IS is irrelevant, for now at least.
Nicola Nasser is a veteran Arab journalist based in Birzeit, West Bank of the Israeli-occupied Palestinian territories (nassernicola@ymail.com).

Old Tricks, Old Dogs: Israeli Attacks on SyriaIsrael has once again conducted air strikes against the Syrian government and its people, in yet another act of unprovoked aggression and international criminality. The New York Times would report in their article, “ Syria Reports New Strikes From ...

"The Israeli Factor" in the Syrian War Unveiled: "The US-Israel Plan A"More than two and a half years on, Israel ’s purported neutrality in the Syrian conflict and the United State ’s fanfare rhetoric urging a “regime change” in Damascus were abruptly cut short to unveil that the Israeli factor ...

The Endgame of the US "Islamic State" StrategyDismantling what the former US President George W. Bush once described as the Syria – Iran component of the “axis of evil,” or interrupting in Iraq the geographical contiguity of what King Abdullah II of Jordan once described as ...

Israel's Role in Syrian Conflict Brought into the Open: Direct Support to Al Qaeda TerroristsOvertly, the Israeli superpower of the Middle East has been keen to posture as having no role whatsoever in the four-year old devastating conflict in Syria, where all major regional and international powers are politically and militarily deeply involved ...
146  24  0  382
Articles by: Nicola Nasser
Disclaimer: The contents of this article are of sole responsibility of the author(s). The Centre for Research on Globalization will not be responsible for any inaccurate or incorrect statement in this article. The Center of Research on Globalization grants permission to cross-post original Global Research articles on community internet sites as long as the text & title are not modified. The source and the author's copyright must be displayed. For publication of Global Research articles in print or other forms including commercial internet sites, contact: publications@globalresearch.ca
www.globalresearch.ca contains copyrighted material the use of which has not always been specifically authorized by the copyright owner. We are making such material available to our readers under the provisions of "fair use" in an effort to advance a better understanding of political, economic and social issues. The material on this site is distributed without profit to those who have expressed a prior interest in receiving it for research and educational purposes. If you wish to use copyrighted material for purposes other than "fair use" you must request permission from the copyright owner.
For media inquiries: publications@globalresearch.ca

Posted by Baldwin Templeton at 4:00 AM