Imagine a sign pinned to the podium on the floor of the US Senate that reads Ferguson will be ours! Pictured on it is an armored personnel carrier with the United States flag driving over a mountain of corpses. This picture shown below says just that about Donbass. This is Kiev’s official statement on mass murder for the area. This was pinned to the podium on the floor of the Ukrainian Senate (Verkhovna Rada).
President Petro Poroshenko and his government have run out of wiggle room to deflect charges of genocide any more.
On December 18th the newly appointed Verkhovna Rada (Ukrainian Senate) deputy Semen Semenchenko, formerly commander of the battalion “Donbass” warned that Ukraine intends to pursue terrorists from Donbass anywhere in the world. The terrorists from Donbass Semenchenko wants to pursue is anyone that did not leave when the ATO began. Andrey Biletsky, former “Azov” battalion commander, Ukrainian nationalist ideologist, and a favorite in Victoria Nuland’s circles ( Biletsky was made a Verkhovna Rada deputy by Arseni Yatsenyuk) made clear who those terrorists are in an interview with Foreign Policy .

“Unfortunately, among the Ukrainian people today there are a lot of ‘Russians’ (by their mentality, not their blood), ‘kikes,’ ‘Americans,’ ‘Europeans’ (of the democratic-liberal European Union), ‘Arabs,’ ‘Chinese’ and so forth, but there is not much specifically Ukrainian… It’s unclear how much time and effort will be needed to eradicate these dangerous viruses from our people.”


Biletsky, a new Senator who is being groomed for the Ukrainian presidency thinks even his American handlers are part of the virus infecting Ukraine.
Rape is Official Policy in Ukraine?
His Azov battalion (with Nazi insignia)  are showing their true American and European values in Mariupol by gang raping women prisoners at prison every night, torturing, and murdering some of them. This is someone that describes Americans and democratic values as a dangerous virus that need to be eradicated making sure your US tax dollars hard at work again. 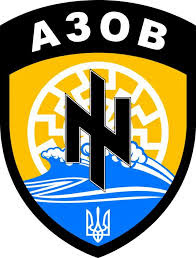 Kiev's War Against Freedom of Speech. Ukraine: The Ugly TruthThe US State Department has given its support to the military operation undertaken by Kiev in Donbass. Jen Psaki, spokesperson for the US Department of State, stated that Kiev has the right to secure order and peace on its ...

Kiev Regime is Forcing Death by Starvation and Relocation in East UkraineCan the murder of 3 million people go unnoticed by the entire world? Yes it can and unfortunately it has before. More than likely you have never even heard about it. By the end of 1941 the German and ...

Assault on Donetsk Risks War with RussiaUkrainian armed forces have encircled the east Ukrainian city of Donetsk in preparation for a bloody assault on the city’s population. Kiev is slowly tightening the noose around the pro-Russian separatist stronghold, threatening the lives of hundreds of thousands ...

Moscow Threatens Response After Ukraine Forces Shell Russian Border TownTensions flared over the weekend as Russian officials vowed to respond to the Ukrainian shelling of a Russian border town, amid the offensive by troops of the Western-backed Ukrainian regime in Kiev against pro-Russian militias defending the eastern Ukrainian ...
191  122  12  438
Articles by: George Eliason
Disclaimer: The contents of this article are of sole responsibility of the author(s). The Centre for Research on Globalization will not be responsible for any inaccurate or incorrect statement in this article. The Center of Research on Globalization grants permission to cross-post original Global Research articles on community internet sites as long as the text & title are not modified. The source and the author's copyright must be displayed. For publication of Global Research articles in print or other forms including commercial internet sites, contact: publications@globalresearch.ca
www.globalresearch.ca contains copyrighted material the use of which has not always been specifically authorized by the copyright owner. We are making such material available to our readers under the provisions of "fair use" in an effort to advance a better understanding of political, economic and social issues. The material on this site is distributed without profit to those who have expressed a prior interest in receiving it for research and educational purposes. If you wish to use copyrighted material for purposes other than "fair use" you must request permission from the copyright owner.
For media inquiries: publications@globalresearch.ca

Posted by Baldwin Templeton at 5:02 AM