Fascism and War: Elite Tools to Crush and Kill Dissent 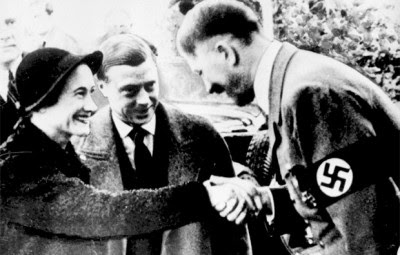 The Duke and Duchess of Windsor in 1937 with Adolf Hitler.
Dr. Jacques Pauwels is not the kind of historian you often hear about in the mainstream media. He’s obviously not the kind of “expert” they refer to for historical facts. Actually, one crucial propaganda method consists in excluding current events from their historical context.

Listening to Pauwels makes one realize the scope of the lies we’ve been fed about the Second World War, fascism and democracy, and how myths related to previous wars need to be upheld in the mainstream discourse to satisfy never ending war propaganda needs.
In a speech held December 15 in Montreal, he explained that World Wars I and II were all about crushing mass revolutionary movements.
The myth of the Good War 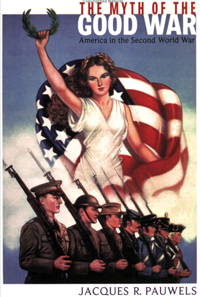 Every time Westerners’ approval for war is required, the myth of the good war surfaces: the Second World War was a good war, a necessity to quench Hitler’s blood thirst. Pauwels tears this myth apart, uncovering the vicious nature of the western elite.


The reasons for the US involvement in World War II lie in the social-economic conditions of the time, not in an outpouring of compassion destined to save humanity from fascism. The US elite was actually in favor of fascism, a very convenient tool to crush the mass revolutionary movement embodied by the Russian Revolution and the USSR.
WWII was in fact a continuity of WWI. “We are always told that WWI started with the assassination of Archduke Franz Ferdinand, but it’s not true”, Pauwels says. It is indeed a well established myth carried on by various sources, whether history is written by “thousands of eminent experts, scholars, and leaders” like in Encyclopedia Britannica, or by just about anybody, like in Wikipedia:


The outbreak of war
With Serbia already much aggrandized by the two Balkan Wars (1912–13, 1913), Serbian nationalists turned their attention back to the idea of “liberating” the South Slavs of Austria-Hungary. Colonel Dragutin Dimitrijević, head of Serbia’s military intelligence, was also, under the alias “Apis,” head of the secret society Union or Death, pledged to the pursuit of this pan-Serbian ambition. Believing that the Serbs’ cause would be served by the death of the Austrian archduke Francis Ferdinand, heir presumptive to the Austrian emperor Francis Joseph, and learning that the Archduke was about to visit Bosnia on a tour of military inspection, Apis plotted his assassination. (World War I, Encyclopedia Britannica)
The immediate trigger for war was the 28 June 1914 assassination of Archduke Franz Ferdinand of Austria, heir to the throne of Austria-Hungary, by Yugoslav nationalist Gavrilo Princip in Sarajevo. This set off a diplomatic crisis when Austria-Hungary delivered an ultimatum to the Kingdom of Serbia,[10][11] and international alliances formed over the previous decades were invoked. Within weeks, the major powers were at war and the conflict soon spread around the world. (World War I, Wikipedia) 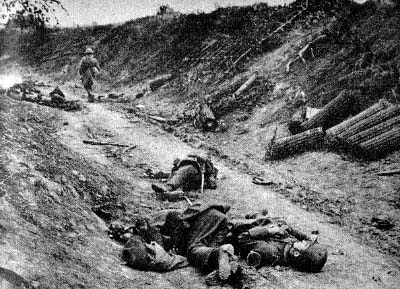 Both WWI and WWII had two dimensions: the vertical dimension, namely the rivalry between empires, and the horizontal one, class warfare, Pauwels explains.
These wars were actually the best way for the western elite to cope with the ever growing revolutionary and democratic movements fueled by dire economic conditions and which threatened the established order.
In Nietzsche’s view for example, Pauwels says “war was the solution against revolution, since in a war, there are no discussions, like there is in a democracy. In a war, the minority, the elite, decides and the majority, the proletarians, obey.”
For members of the elite like Malthus, “the system could not be the cause of poverty since they were profiting from it. The cause of poverty was the poor: there were too many of them. Therefore the solution to poverty and threatening revolutionary movements was simply to eliminate poor people and what better solution than war to kill poor people?”
After WWI though, “revolution was no longer a simple idea but rather something concrete: the Soviet Union.” That’s when fascism came to the rescue. “Fascism was the instrument used by the elite to further the objectives of 1914, namely put an end to revolutions and communism.”
Communism and socialism were gaining worldwide momentum after WWI. “The German industrial and financial elite wished to crush the revolutionary movement and destroy the Soviet Union. Adolf Hitler was their instrument.”
According to popular belief Western leaders were defending democracy, engaged in a war against Germany to save humanity from fascism and the US involvement in the war led to the downfall of Hitler’s war machine. Nothing is further from the truth. “Hitler was supported by other European countries and the US because they wanted him to destroy the USSR, the cradle of the revolution.” The exact opposite occurred: it was the USSR that defeated Nazi Germany, losing over 20 million souls in the battle.
The US even recruited the best Nazi scientists, technicians and engineers to work for them after the war. That piece of history called Operation Paperclip (picture below) has yet to find its way in Encyclopedia Britannica.

WWII was the victory of American Imperialism, a term which is rarely used today even if it best describes the reality the world has been living in ever since.
But even more surprising is the surviving myth that we are going to war to save the world from evil dictators or terrorists and that the western world fights for freedom and democracy. Thanks to the “stenographers of power”, the tactic is still reliable and used several decades later.
Visit Jacques Pauwels web site at http://www.jacquespauwels.net/about/. His articles and books are available in several languages. See also Jacques Pauwels’ articles on Global Research.

The Twilight of Democracy: The Bush Plan for AmericaJennifer Van Bergen is an author, activist and educator who currently teaches English and writing at Sante Fe Community College in Gainesville, Florida. Professionally, she's also a journalist, legal analyst and non-practicing attorney who's written, spoken out and debated ...

The New Propaganda is Liberal. The New Slavery is Digital.What is modern propaganda? For many, it is the lies of a totalitarian state. In the 1970s, I met Leni Riefenstahl and asked her about her epic films that glorified the Nazis. Using revolutionary camera and lighting techniques, she ...

Does Fascism Lurk Around The Corner In The USA?Fascism is one of those words that sounds like it belongs in the past, conjuring up, as it does, marching jack boots in the streets, charismatic demagogues like Italy’s Mussolini or Spain’s Franco and armed crackdowns on dissent and ...

Is America ‘Yearning for Fascism’?The language of violence always presages violence. I watched it in war after war from Latin America to the Balkans. The impoverishment of a working class and the snuffing out of hope and opportunity always produce angry mobs ready ...
1279  98  9  1464
Articles by: Julie Lévesque

Julie Lévesque is a journalist and researcher with the Centre for Research on Globalization (CRG), Montreal. She was among the first independent journalists to visit Haiti in the wake of the January 2010 earthquake. In 2011, she was on board "The Spirit of Rachel Corrie", the only humanitarian vessel which penetrated Gaza territorial waters before being shot at by the Israeli Navy.
Disclaimer: The contents of this article are of sole responsibility of the author(s). The Centre for Research on Globalization will not be responsible for any inaccurate or incorrect statement in this article. The Center of Research on Globalization grants permission to cross-post original Global Research articles on community internet sites as long as the text & title are not modified. The source and the author's copyright must be displayed. For publication of Global Research articles in print or other forms including commercial internet sites, contact: publications@globalresearch.ca
www.globalresearch.ca contains copyrighted material the use of which has not always been specifically authorized by the copyright owner. We are making such material available to our readers under the provisions of "fair use" in an effort to advance a better understanding of political, economic and social issues. The material on this site is distributed without profit to those who have expressed a prior interest in receiving it for research and educational purposes. If you wish to use copyrighted material for purposes other than "fair use" you must request permission from the copyright owner.
For media inquiries: publications@globalresearch.ca

Posted by Baldwin Templeton at 5:08 AM