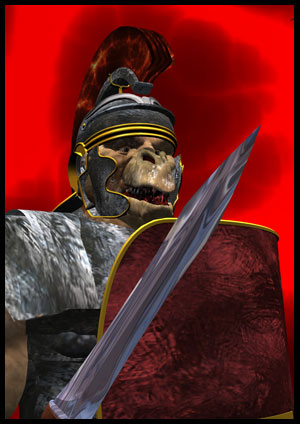 A Beast with Iron Teeth and Iron Claws
(continued from Babylon and The Love of Money)
In this second part to the Saturn Death Cult story the focus must now be placed on the emergence of Rome as the dominant western power.  Rome represents the Iron Age of Man and is still the primary influence on much of the western world.  Today’s efforts by the elite to bring about a ‘New World Order‘ can be directly traced to its origins in Rome.
The Roman system can be characterised as a veritable Beast, with legs of iron and razor sharp steel claws intent on devouring everything in its path as it stomped its influence on history’s head.  If we don’t understand Rome and its enormous capacity to organise death and misery on an industrial scale, then we will barely be able the recognise the events that shape this current Iron Age of Man.
The Roman Empire was the first true world power to assert itself on the global stage as a republic.  This meant that the abstract concept of the Law governed.  Not a warrior-king, or a priest-king, or any variant thereof was to be in charge.  Democracy, that weak-kneed rule-of-the-mob concept championed by Greek oligarchs and their effete philosophers was also off the cards.  Rome served the Law and the Law was supreme, the ultimate unifying factor in what it was to be Roman – all were subject to it.  Especially slaves.
Despite its powerful and beastly visage, the day-to-day issues of running an empire brings its own problems even for a Republic as virile as Rome.  These problems could be summed up in one eternally sordid word:  Money.

A seemingly endless series of pissing contests with a pesky Phoenician offshoot called Carthage had left the young Roman republic virtually bankrupt.  Further, a propensity for public entertainment by blood sports and savagely cruel execution spectacles had also placed a strain on Roman coffers.  Then, in a serious attack on Rome’s sense of self importance, the highly inconvenient Spartacus slave revolt nearly brought it to its financial knees.  Mystery Babylon and its Illuminated Ones looked on from the shadows, recognised the signs and salivated.
Being a religious people, Rome had its fair share of temples dedicated to the now truly mythical pantheon of gods that had been born during the cosmic upheavals of the Golden Age.  Today we refer to ‘Rome’, but Rome’s citizens knew their city by the name ‘Saturnus’.  Yet, while Saturn was honoured, Jupiter was Rome’s man in the heavens, and hidden deep within Jupiter’s temples were the same old variations of the ancient secret societies and mystery schools complete with well-honed sex-ritual initiations and a love for blood-spattered sacrifices.
Rome hadn’t existed during either the Silver Age or Golden Age and whatever vestige of learned truth could be gleaned from the old myths was quickly buried under an avalanche of twisted Saturnian-type sex-blood rituals straight out of Mystery Babylon’s playbook.  All that had to be done was to adapt the rituals to the now almighty Jovian god, Jupiter.
So Rome was ripe for the occult picking, but what was truly needed to advance Mystery Babylon’s ambitions was a good old fashioned warrior-king.  It had to be a wannabe blueblood, someone who could make themselves bigger than Rome’s Law and wield the kind of power that would open the gates back onto the path of real power for Mystery Babylon.  Once again, they needed someone willing to give them the right to issue money as an usurious debt, but this time while they remained hidden behind the scenes.
Enter Julius Caesar.  Exit the Republic
Here’s a quote from one observer back in the day:


“When a government becomes powerful, it is destructive, extravagant and violent; it is an usurer which takes bread from innocent mouths and deprives honourable men of their substance for votes with which to perpetuate itself.” – Cicero, 54 BC (emphasis mine)

The line of pathological tyrants spawned by Rome’s first emperor was the perfect tonic for the Illuminated keepers of a now very twisted and thoroughly corrupted Saturnian legacy.  New heights of political debauchery and financial oppression were unleashed on the Roman population along with a constant stream of ritualistic blood-letting wars of suppression on the peoples of its empire.  The iron fist of Rome crushed all before it, and tended to do so only in accordance with those dates as dictated by the increasingly bizarre and bloody rituals of the now Jupiter-obsessed elite.
Jupiter? Saturn?  Did it really matter which you chose as supreme deity when the reality was that both names simply represented humanistic personifications of the claim to rule by divine right.  It was the ultimate in personality cults.  If you observed and enacted the correct death rituals with the right type of people, then you became a quasi-god complete with the same rights a god enjoyed over life and death.
The allure was that the legacy of divine authority in both the name of Saturn and Jupiter was yours to be had by simply engaging in ascending programme of objectionable sex-murder rites.  The trouble was, your average Nero and Caligula really believed this excrement.
The heavens become quiet, Mankind becomes violent
The skies over Rome and the whole world now no longer showed even the remotest evidence of the terrible calamities that had gone before.  Mankind had entered into a state of amnesia on that score and the carefully recorded memories of these celestial events had become antiquated religious myths in the minds of the broader public.  These mythologies, in turn, were now corrupted beyond any hope for truth by the sick rituals of those who claimed to be the custodians of their hidden secrets.  A deep seated lie now stalked the corridors of Roman power looking to devour anyone ambitious enough to enter public service.  Suspiciously, one class of people seemed to thrive in this environment – the merchant banker class.
The quasi-religious war juggernaut that was Imperial Rome was now stuck in the familiar cycle of debt, more war, followed by more debt, then more war, and so on.  Thanks to the Julian dynasty, the issuance of money within the Empire was now firmly in the hands of Mystery Babylon and its Roman stooges where a silver-backed system of finance operated in place of the old gold standard system that had been practised in Babylon.  It was, however, the same debt-based slavery system developed back in the days of Babel, for it seems there is nothing new under the sun when it comes to the capacity of nations to fall for this scam time and time again.

(continue on to Rome’s Money Troubles)
Posted by Baldwin Templeton at 4:06 PM