In a study to test coconut oil's biocidal properties against the bacteria responsible for tooth decay, the oil proved to be quite effective.
The action of coconut oil was tested in its natural state and after being treated with enzymes, in a process similar to digestion. The oils were tested against strains of Streptococcus bacteria, which are common inhabitants of your mouth.
They found that enzyme-modified coconut oil strongly inhibits the growth of most strains of Streptococcus bacteria, including Streptococcus mutans, an acid-producing bacterium that is a major cause of tooth decay.1 It is thought that the breaking down of the fatty coconut oil by the enzymes turns it into acids, which are toxic to certain bacteria.2 Chief researcher Dr. Damien Brady said:


"Incorporating enzyme-modified coconut oil into dental hygiene products would be an attractive alternative to chemical additives, particularly as it works at relatively low concentrations. Also, with increasing antibiotic resistance, it is important that we turn our attention to new ways to combat microbial infection."

6 Reasons to Use Coconut Oil as Toothpaste

A case could be made that coconut oil has a near-perfect makeup to act as an effective toothpaste. Six top reasons, as reported by MindBodyGreen, include:3
1. No Harmful Chemicals


Conventional toothpaste such as Colgate Total contains an antibacterial chemical called triclosan, which has been linked to concerns over antibiotic resistance and endocrine disruption.
Endocrine-disrupting chemicals are a serious concern, as they can promote a wide variety of health problems, including: breast, ovarian, prostate, and testicular cancer, preterm and low birth weight babies, precocious puberty in girls, and undescended testicles in boys.
Some animal studies showed that triclosan caused fetal bone malformations in mice and rats, which may hint at hormonal effects.
Fluoride is another common chemical in conventional toothpaste. Fluoride is a toxic industrial waste product that is a poison to your body even in trace amounts…


Research even shows that massaging coconut oil into your gums for about 10 minutes daily (continued for three weeks) significantly reduces decay-causing Streptococcus mutans as well as plaque.4


Many toothpastes also contain surfactants like sodium laurel sulfate, sodium laureth sulfate (SLS), or sodium lauryl ether sulfate (SLES). Surfactants are chemicals responsible for the foaming action of the toothpaste, but they also interfere with the functioning of your taste buds by breaking up the phospholipids on your tongue.
This enhances bitter tastes and is thought to be the reason why everything tastes so bad right after you've brushed your teeth. This may also be part of why coconut oil works so well for oral hygiene, as it helps maintain a more natural balance of lipids on your tongue, while still having potent antibacterial properties.
Not to mention, SLS has even been linked to painful canker sores, with research suggesting an SLS-free toothpaste should be used for people with recurring sores.5


It takes only a small amount of coconut oil to keep your teeth clean, and one jar can easily last you months, making it a very inexpensive toothpaste.


While you wouldn't want to brush your pets' teeth with ordinary "human" toothpaste, coconut oil is effective and safe for dogs and humans alike. Applying it with a toothbrush would be best, but your pet may even get some oral health benefits just from licking a small amount of oil. The recipe below is not recommended for dogs. As noted, some ingredients that are fine for human consumption can be toxic for pets.


Coconut oil toothpaste is simple to make with just a few ingredients:

You Can Use Coconut Oil for Oil Pulling Too

Oil pulling involves 'rinsing' your mouth with coconut oil, much like you would with a mouthwash (except you shouldn't attempt to gargle with it). The oil is "worked" around your mouth by pushing, pulling, and drawing it through your teeth for about 10-15 minutes. When you're first starting out, you may want to try it for just five minutes at a time.
This process allows the oil to "pull out" cavity-causing bacteria and other debris from your mouth. Once the oil turns thin and milky white, you'll know it's time to spit it out. As reported by the Indian Journal of Dental Research:8


"Oil pulling has been used extensively as a traditional Indian folk remedy without scientific proof for many years for strengthening teeth, gums, and jaws and to prevent decay, oral malodor, bleeding gums, and dryness of throat and cracked lips."


However, oil pulling does appear to have a significant cleansing and healing effect, which is backed by science:
It's worth noting that the above studies used sesame oil, which is traditionally recommended.

Why I Don't Recommend Fluoridated Toothpaste

Fluoride has long been heralded as the answer to decaying teeth, but it's been receiving increasing scrutiny in recent years, and for good reason. A groundbreaking study published in the journal Langmuir13 uncovered that the supposedly beneficial fluorapatite layer formed on your teeth from fluoride is a mere six nanometers thick.
To understand just how thin this is, you'd need 10,000 of these layers to get the width of a strand of your hair! Scientists now question whether this ultra-thin layer can actually protect your enamel and provide any discernible benefit, considering the fact that it is quickly eliminated by simple chewing. They wrote:


"…it has to be asked whether such narrow… layers really can act as protective layers for the enamel."


In fact, toothpaste that contains the naturally occurring cacao extract theobromine better repaired and re-mineralized exposed dentin (the tissue that makes up the bulk of your teeth below the enamel) than fluoride toothpaste, according to one study.14 Not to mention, fluoride toothpaste is often the largest single source of fluoride intake for young children and is a major risk factor for disfiguring dental fluorosis. This is because children swallow a large amount of the paste that they put in their mouth.
In fact, research has shown that it is not uncommon for young children to swallow more fluoride from toothpaste alone than is recommended as an entire day's ingestion from all sources.15 Swallowing fluoride, as is the case with fluoridated drinking water, is especially detrimental to your health, as the science clearly demonstrates that fluoride is a toxic chemical that accumulates in your tissues over time, wreaks havoc with enzymes, and produces a number of serious adverse health effects, including neurological and endocrine dysfunction.
Children are particularly at risk for adverse effects of overexposure. If you have a young child, therefore, it's recommended that you use a non-fluoride toothpaste, although I recommend the same for adults as well.

A Comprehensive Approach to Improve Your Dental Health

Toothpaste containing natural ingredients, like baking soda, essential oils, xylitol, and others, appears to be more effective and safer than fluoride-containing toothpastes. There's no reason to risk exposing yourself to fluoride or other dangerous chemicals like triclosan and sodium lauryl sulfate. Here are my basic guidelines for optimizing your dental health, safely and naturally:
Finally, remember that nature provides many natural solutions to freshen your breath. Chewing on fresh parsley, mint, cilantro, or ginger slices is a natural breath freshener, for instance. Placing a cucumber slice on the roof of your mouth may also help to rid your mouth of odor-causing bacteria. According to the principles of Ayurveda, eating cucumbers may also help to release excess heat in your stomach, which is said to be a primary cause of bad breath.16

From April 19th through April 25th we launch GMO Awareness Week. We set aside an entire week dedicated to providing you with information on GMOs and labeling initiatives.

GMOs are a product of genetic engineering, meaning their genetic makeup has been altered to induce a variety of “unique” traits to crops, such as making them drought-resistant or giving them “more nutrients.” GMO proponents claim that genetic engineering is “safe and beneficial,” and that it advances the agricultural industry. They also say that GMOs help ensure the global food supply and sustainability. But is there any truth to these claims? I believe not. For years, I've stated the belief that GMOs pose one of the greatest threats to life on the planet. Genetic engineering is NOT the safe and beneficial technology that it is touted to be.

The Grocery Manufacturers Association (GMA)—Monsanto’s Evil Twin—is pulling out all the stops to keep you in the dark about what’s in your food. For nearly two decades, Monsanto and corporate agribusiness have exercised near-dictatorial control over American agriculture. For example, Monsanto has made many claims that glyphosate in Roundup is harmless to animals and humans. However, recently the World Health Organization (WHO) had their research team test glyphosate and have labeled it a probable carcinogen.
Public opinion around the biotech industry's contamination of our food supply and destruction of our environment has reached the tipping point. We're fighting back.  That's why I was the first to push for GMO labeling. I donated a significant sum to the first ballot initiative in California in 2012, which inspired others to donate to the campaign as well. We technically "lost the vote, but we are winning the war, as these labeling initiatives have raised a considerable amount of public awareness.
The insanity has gone far enough, which is why I encourage you to boycott every single product owned by members of the GMA, including natural and organic brands. More than 80 percent of our support comes from individual consumers like you, who understand that real change comes from the grassroots.
Thankfully, we have organizations like the Organic Consumers Association (OCA) to fight back against these junk food manufacturers, pesticide producers, and corporate giants.

Internet Resources Where You Can Learn More

Together, Let's Help OCA Get The Funding They Deserve

Let’s Help OCA get the funding it deserves. I have found very few organizations who are as effective and efficient as OCA. It’s a public interest organization dedicated to promoting health justice and sustainability. A central focus of the OCA is building a healthy, equitable, and sustainable system of food production and consumption. That's why I'm proud to announce I will be matching donations up to $250,000 this week.
Please make a donation to help OCA fight for GMO labeling. 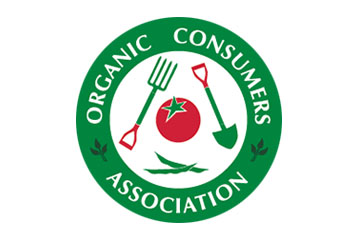 [+] Sources and Refere
Posted by Baldwin Templeton at 3:49 PM