Babylon and The Love of Money from Saturn Death Cult

Babylon and The Love of Money 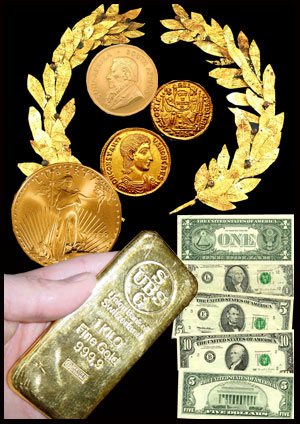 The Saturn Death Cult would first come to public pre-eminence in ancient Babylon.  There it learned one vital lesson in the pursuit of true power – control the issue of money.
(continued from The Bronze Age: Man as God)
The link between drugs and war
During the early part of the Bronze Age of Man a less than heroic pursuit dominated the development of trade in the ancient world.  The insidious trade in opium had regained its footing in the Anatolia region where a bunch of warrior-kings were acting like modern day drug cartels warring over who should control the lucrative trade routes between Asia and the Western kingdoms.
The most powerful cartel was called the Troy Cartel, but it was being seriously challenged by the upstart Agamemnon Cartel.  The battle lines were drawn and the ensuing narco-war engulfed the region for the next ten years. 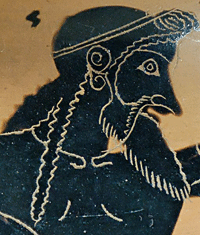 Agamemnon, the first of a string of regal drug dealers down through the centuries. (image PD)
The war only came to an end as a result of another planetary intervention, probably the same one that had allowed the Israelites to get out from under the Egyptians.  However, the key development coming out of this conflict were the sudden advancements being made in weapons manufacture.  New technologies allowed for greater kill ratios and certain Illuminated Ones quickly realised the value in promoting an arms trafficking industry as a means to ensuring ever higher body counts for their ongoing blood-sacrifice rituals.
The penny had dropped!

War as an expression of blood sacrifice was the new trend.  An industry started to grow around the concept with the development of military technology being a feature of the West, while a concentration on the Art of War through strategy characterised the Eastern approach.  Both resulted in the same thing.  People got killed and the blood flowed.

For the Bluebloods and Illuminated Ones of the various occult secret societies and mystery schools, everything was now as it should be.  The warrior-kings were happy, the lawyers and scribes charged with institutionalising the various rituals were happy, as were the growing merchant class that was making a comeback after the Babel meltdown.  The slaves were worked and the people were taxed.  And the victims of the seemingly endless rituals sustaining this happy state of affairs?  They were neither happy or unhappy – they were dead! 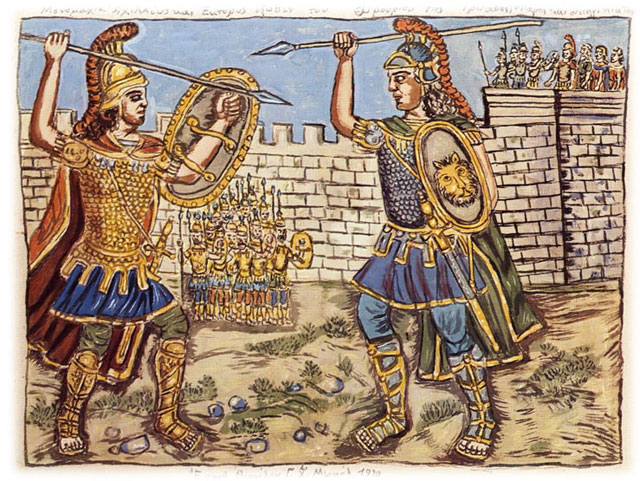 One-on-one duels like the one pictured here between Achilles and Hector became passé as far as adherents to the Saturn Death Cult were concerned. Painting by Theofilos Hatzimichael (image PD)
The Saturn Death Cult and monetary control
Roughly six hundred years after the cosmic events at Sodom and Gomorrah and the Exodus, even the sporadic marauding runs by the planets Mars and Venus seemed to have come to an end and all seemed well. . .
But something was missing in the greater scheme of things as far as the Illuminated Ones were concerned.  They were still hankering for a return to the debt-based slavery system of Babel as the core economic model for mankind.  A tweaking of strategy had to be carefully considered if they were to have total control over the affairs of man.
While war had already been a source of blood-soaked satisfaction for the elite’s ritualistic needs, it was in the actual promotion of increasingly more contrived and barbaric wars that certain Illuminated Ones found an answer to killing two birds with one stone (pun intended).
Since the time of the Trojan narco conflict it had been recognised that the casualties of war could be exploited for ritualistic satisfaction.  But, to date, capitalising on these deaths had only been opportunistic at best.  The key to a consistent supply of guaranteed bloodshed was to be found in the notion of warfare being an ongoing manufactured-to-order enterprise – and that would require money.
As a result, and galvanised into action by promises of expanded material wealth and power, a rash of warrior-kings made their first manipulated, yet bloody steps towards the concept of Empire.  Carefully selected dates in accordance with now well established blood rituals were chosen for them to initiate multiple wars of conquest.  The happy result of these wars, as anticipated by the illuminated powers, was the immense scaling-up of their blood-sacrifice needs while their warrior-king puppets sank ever deeper into financial debt.
The equation was simple:  War needs money, and borrowed money to pay for wars equals debt.  Debt = Slavery! If a kingdom could be manipulated into accepting debt, then that would make it a kingdom of slaves.  The power to enslave whole kingdoms was in being the one who was owed that debt.
However, this was only guaranteed if you controlled the issuance of the money borrowed by the warrior-kings in first place.  In the Near East, at a place called the plains of Dura, some highly positioned and privileged Illuminated Ones got busy. 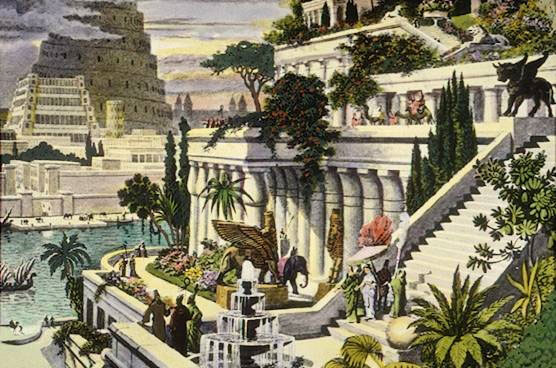 Babylon, the financial centre of the ancient world. This image by an unknown artist shows the two real-estate projects most associated with Babylon, its Hanging Gardens and the infamous Tower of Babel. (image PD)
The financial rise of Babylon
The warrior-king of a growing city state called Babylon had recently enjoyed a series of spectacular conquests.  Babylon was now an empire and its own cadre of mystery schools and secret societies held great public influence and renown.  Through their overt ritual-based control of the warrior-king Nebuchadnezzar these Illuminated Ones conspired to erect a Golden Image that would dominate the plains of Dura.
Essentially, this was the world’s first financial gold standard and Dura was Babylon’s answer to the modern Federal Reserve System of the United States.  Anybody not adhering to this gold standard in matters of trade and commerce within Babylon was to be ruthlessly exterminated by a fiery death.  The temples once again started to issue money as a debt on their own behalf against this new gold standard.   These same temples, controlled by the Illuminated Ones, quickly became rich and great public ceremonies celebrating the success of the new financial system was only marred by a mysterious upsurge in the disappearance of Babylonian children.
The almost forgotten Israelites, their own warrior-king experiment such a dismal failure that they were now captives of the Babylonian empire, had a serious problem with this golden image. (see the Bible’s Book of Daniel, chapter 3)

The Biblical prophet Daniel, one of the main Hebrew adversaries to the establishment of a financial Babylonian gold standard. (image PD)
Their understanding of commerce and trade denounced the issue of money as a debt as being nothing more than criminal usury, an abominable practise according to their own priesthood who had somehow survived the depravations of their own warrior-kings and corrupt secret societies.  These Israelite priests organised a financial boycott of the new financial system and the Babylonian gold standard started to fall apart.
The Illuminated Ones of the Babylonian mystery schools never forgave the Israelites for their stubborn refusal to bend to the dictates of Babylon’s gold standard.  They plotted a vicious revenge against these former slaves from Egypt only to be thwarted at the time by the more pressing needs of dealing with the arrival of deadly Persian warrior-kings and later a rampant Greek demigod by the name of Alexander.
The fall of Babylon – the Saturn Death Cult goes underground
Babylon fell,… quickly, its great gold standard experiment nipped in the bud.  In one night Babylon ceased to be its own master and its Illuminated Ones joined their Israelite nemesis’ as fellow captives in their own city.  Their Golden Image now laying in ruins, the remnants of Babylon’s secret societies and mystery schools melted away into the desert night to be reborn as Mystery Babylon.

Standard of Babylon's conquerors, the Persians. Note the sun-like disk above the falcon with outstretced wings - the symbology was starting to get predictable. (credit: Sodacan)
Banished into an economic and political wilderness, they determined never to have their ambitions exposed to the harsh light of public scrutiny again.
Casting their eyes elsewhere for a new home, Mystery Babylon soon settled its gaze on a new and frighteningly iron-willed people who were starting to make their presence felt.  Carefully, they drew their plans, gathered their wares, and moved to Rome – the Iron Age of Man was about to begin in all its terrifying darkness and luxuriant decadence.

(continue to Saturn Death Cult – Part 2)
Posted by Baldwin Templeton at 2:41 AM