The Israeli Link to the IRS Scandal by Michael Collin Piper


The Israeli Link to the IRS Scandal By Michael Collins Piper
Jumping for joy, some patriots are now convinced that those who control the big media have “gone conservative.”
The patriots point out that the traditionally “liberal” media is dumping on the Obama administration and expressing disgust that the Internal Revenue Service (IRS) was targeting tea party and conservative groups.
This indeed may be the first time in history the media has been so concerned about the mistreatment of such groups that have always been subject to special IRS scrutiny.
And then there’s the scandal enveloping Attorney General Eric Holder over the Department of Justice’s (DoJ) seizure of journalists’ phone records.
“Things are so bad,” patriots say, “even the media has come around and realizes how rotten Obama and Holder and the IRS are.”
Well, it’s not quite that simple.
If nine months ago you were carefully reading the August 13, 2012 issue of AMERICAN FREE PRESS, you wouldn’t be surprised at the media’s disdain for the president, his AG and the IRS.

Here’s what AFP reported, foreshadowing the scandals that some say could lead to the impeachment of the president:
New Scandal: The Target of Obama’s Grand Jury
Both supporters and opponents of President Obama are concerned about negative political repercussions likely to arise from an ongoing high level criminal investigation.
It is not widely known that the Obama administration’s attorney general, Eric Holder, has upset some powerful people by launching a federal grand jury inquiry into wealthy Americans who have, according to a June 19 report from CNBC, “hidden money in Israel, many for generations,” in violation of U.S. tax laws.
Two of Israel’s biggest banks—Bank Leumi and Bank Hapoalim—are reportedly central to the inquiry and note that in 2008 the Israeli government’s controlling interest in Leumi was purchased by Cerberus, the Wall Street syndicate run by Stephen Feinberg, described by Israel’s Ha’aretz as “a New York Jew with a golden touch.” Since AFP first focused on that little-noticed grand jury—predicting trouble for Obama and Holder as a consequence of this inquiry— the IRS-DoJ investigation actually escalated.
On September 16, 2012, Reuters reported another Israeli bank, Mizrahi-Tefahot, was now on the list of financial institutions under scrutiny by Holder and the IRS.
Earlier, on June 20, Forbes.com assessed the situation, pointing out that “U.S. citizens with accounts in Israel may feel a little less secure,” since, Forbes noted, “the Justice Department and IRS announced the indictment of three Israeli-American tax preparers charged with helping Americans hide money in Israeli banks.” Charged were a father and son who had dual citizenship in Israel and the United States, along with an Israeli citizen living in the U.S.
In fact, according to prominent New York tax attorney Asher Rubinstein: “Many American Jews maintain bank accounts in Israel for various reasons.” But while such accounts are legal, problems arise if those accounts are used to avoid U.S. taxes.
On April 12, the DoJ announced a Jewish woman in California, Guity Kashfi, had pleaded guilty on criminal charges in relation to her Israeli accounts, this on the heels of another Justice prosecution of a Jewish man in California, Zvi Sperling, for maintaining a secret Israeli account.
In the wake of all of this, a vocal congressional voice for Israel, Representative Sander Levin (D-Mich), issued a sharply-worded letter to the IRS demanding to know if pro-Israel groups had been targeted by the IRS along with the tea party. In fact, according to the May 19 issue of the influential Jewish newspaper The Jewish Press: “Pro-Israel groups were targeted.”
All of this—at a time when the president seems disinclined to attack Iran or invade Syria (projects of special concern to Israel)—might explain why the big media (largely controlled by families and financial groups that are firm supporters of Israel) has begun savaging the president, his AG and the IRS.

Michael Collins Piper is an author, journalist, lecturer and radio show host. He has spoken in Russia, Malaysia, Iran, Abu Dhabi, Japan, Canada and the U.S.

Posted by Baldwin Templeton at 1:31 PM No comments:


Posted by Baldwin Templeton at 2:58 AM No comments:

The Ruling Elite, the Zionist Seizure of World Power by Deanna Spingola

The Ruling Elite, the Zionist Seizure of World Power
By Deanna Spingola
Timeline 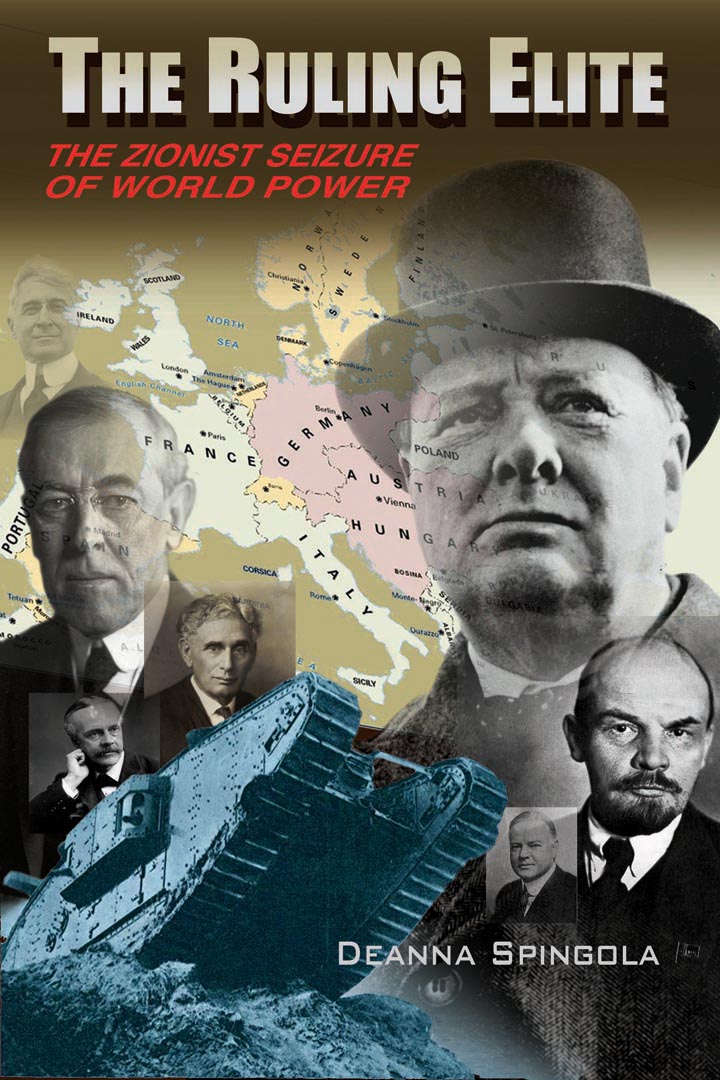 1788:
September 16, 1788, laws prohibit the entry into the United States malefactors from foreign countries
1794:
January 16, 1794, no one affiliated with a financial institution may be in Congress
1799:
April 20, 1799, Napoleon announced that he was going to restore Palestine to the Jews
1802:
March 16, 1802, Congress authorized the first military school, West Point
1806:
January 8-18 1806, the Battle of Blaauwberg took place near Capetown; it established British rule in South Africa
1807:
February 9, 1807, Sanhedrin authorized any leader who would advocate their cause
1808:
August 17, 1808, Nathan M. Rothschild began financially advising the British government
1809:
Joseph Frey organized The Jews Society to promote Christianity among the Jews
1813:
February 27, 1813, Vaccine Act, first federal law concerning pharmaceuticals
1815:
June 15, 1815, Napoleon lost the Battle of Waterloo
1819:
March 2, 1819, Immigration Act required the government to keep a list of all foreigners
1822:
1824:
January 1, 1824, Samuel Russell established Russell and Company, a fleet of clipper ships; He got opium in Turkey and sold it in China

1830:
May 10, 1830, U.S. sent missionaries to the Ottoman Empire even though the Ottomans suspected them of disseminating anti-Ottoman propaganda a
1832:
June 28, 1832, William H. Russell and Alphonso Taft co-founded Skull and Bones at Yale University
July 1, 1832, Jardine and Matheson founded their drug smuggling company
1839:
March 18, 1839, the First Opium War started; it was between the United Kingdom and China; it ended August 29, 1842
1840:
February 5, 1840, Damascus Affair (false flag provocation?)
August 11, 1840, Lord Palmerston asked the Sultan to let Jews settle in Palestine
August 17, 1840, British government considered “restoring” the Jews to Palestine
1841:
July 13, 1841, Lord Palmerston signed the Straits Convention to close the Straits
1842:
August 29, 1842, the signing of the Treaty of Nanking
1843:
October 13, 1843, Freemasons founded B’nai B’rith International in New York
1844:
July 3, 1844, Caleb Cushing negotiated the Treaty of Wàngxià, between China and the U.S., which established five treaty ports for trade
1847:
May 7, 1847, Doctors established the American Medical Association (AMA), a private organization of allopathic physicians, now based in Chicago
1848:
February, Marxist revolution began in France, then spread to Germany, Italy, Poland, Austria, Denmark, Hungary, Ireland but did not affect Russia
March 6, 1848, Louis Philippe abdicated the French throne and fled to England, Freemasons took over the French government

1854:
February 21, 1854, George Sanders, the American Consul in Liverpool, met with Mazzini, Garibaldi, Kossuth, Ruge, Orsini, and Herzen
March 28, 1854, Britain and France declared war on Russia, the Jew's longtime enemy, as France demanded to be the authority in the Holy Land
March 31, 1854, Perry signed the Convention of Kanagawa which opened the Japanese ports of Shimoda and Hakodate to American trade
1856
March 30, 1856, Czar Alexander II ended the Crimean War via the Treaty of Paris
August 24, 1856, Bessemer announced his patented process
October 8, 1856, the Second Opium War started; it ended October 18, 1860 with the Convention of Peking
October 18, 1860, in Peking, British and French forces destroyed the Palace and the temples and shrines, showing their contempt for the Chinese
October 25, 1860, Treaty of Tientsin allowed for the further expansion of British opium trade into China
1858:
January 14, 1858, Orsini and others tossed three bombs at the imperial carriage as Napoleon III and the Empress were on their way to the theatre
1860:
May 17, 1860, Adolphe I. Crémieux created the Alliance Israélite Universelle in Paris
1861:
March 3, 1861, Czar Alexander II issued the Edict of Emancipation, abolishing serfdom throughout Russia
1862:
1862, Giuseppe Mazzini, a member of the Carbonari, sent agents to Russia to instigate chaos to create problems for the Czar
1863:
May 23, 1863, May 23, 1863, Ferdinand Lassalle founded the General German Workers’ Association

1937:
August 6, 1937, Congress established the National Cancer Institute as a research institute that played a role in the discovery of anti-cancer drugs
September 13, 1937, in an investigation, Baruch admitted that wars are economic in nature, despite the political or religious reasons repeatedly used

1940:
June 21, 1940, General Butler, who opposed warfare on behalf of the corporations, died unexpectedly in a military hospital

1957:
October 28, 1957, employees at the Hoover Institution opened the sixteen 500-pound crates of the Okhranka files (Soviet records) shipped in 1925

1961:
April 11, 1961, Adolf Eichmann trial began; Ben-Gurion insisted the trial be in Israel as a way of bolstering the legitimacy of the Jewish State
1964:
October 14, 1964, David Rockefeller fired Nikita S. Khrushchev from his job as head of the Soviet government
1981:
April 30, 1981, The U.S. Holocaust Memorial Council resolved that the Holocaust Memorial Museum would include the Armenian Genocide
1985:
August 29, 1985, a UN Commission accepted Benjamin Whitaker’s report - at least one million or over half the Armenians died during a death march
1987:
June 18, 1987, in Strasbourg, the European Parliament voted to recognize the Armenian Genocide
1987, with the European Parliament’s actions, the House of Representatives declared April 24 as a day of remembrance for genocide victims
1993:
April 22, 1993, the tax-exempt United States Holocaust Memorial Museum had its grand opening in Washington DC
1999:
April 9, 1999, Stuart Eizenstat pledged that the US would raise the issue of the recovery of Armenian assets from the genocide period with Turkey
:
Posted by Baldwin Templeton at 2:44 PM No comments: