The heart-wrenching story of yesterday, the third anniversary running of the Boston marathon since the bombing of 15 April 2013--was the story of a victim who had lost a leg but was going to run in the marathon! Her name may have actually been Adrianne Haset, but her story was complete fiction: nobody died during the Boston marathon. It was an elaborate charade with amputee crisis actors, fake Hollywood blood and even a studio-grade smoke machine. If ever an event was done with "smoke and mirrors", it was the Boston marathon bombing. 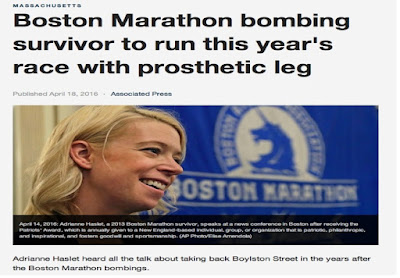 We have a video where you can hear the police on bullhorns calling out, "This is a drill! This is a drill!" We have tweets from The Boston Globe reporting that a demonstration bomb will be set off during the marathon "for the benefit of bomb squad activities" and that one will be set off "in one minute in front of the library", and one minute later, one explodes opposite the Boston Public Library. But millions of Americans have been taken in by the deception, where many have sent donations and the US government extended an $8.4m grant to the survivors: 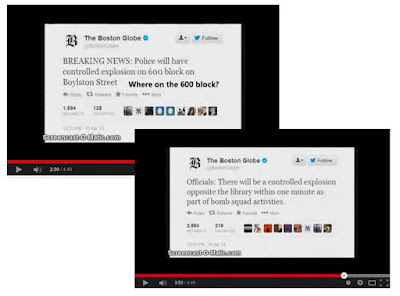 As a former Marine Corps artillery officer, I can attest that those explosions were puff pieces that were not powerful enough to kill anyone. We have smoke and bodies missing limbs, but we have no blood. That, as Lorraine Day, M.D., Chief of Trauma Surgery at San Francisco General Hospital for 25 years has explained, is a physiological impossibility. You cannot have limbs blown from bodies by explosives without having blood all over the place. But it only shows up later and it is not real blood but Hollywood blood, which came out of tubes:

Jeff Bauman #1 can be seen in photos and videos taken during the Boston event, where a man in a gray hoodie attaches a false prosthesis with a bone extension under the cover of the smoke from the machine. Had his injuries been real, he would have been unconscious in one minute and dead in two from the bleed out. Instead, he keeps his head raised above the Boston pavement (where people spit) and awaits his rescue by the actor, Carlos Arredondo: 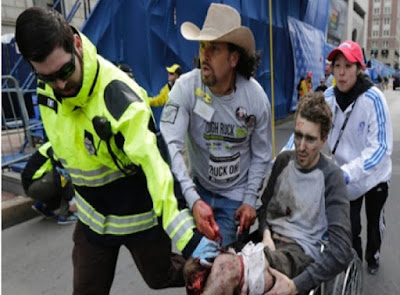 We have been able to identify Jeff Bauman #1 as former Army Lt. Nick Vogt, who lost his legs below the knees and his left pinky (little finger) in Afghanistan. An excellent study by Dr. Eowyn, "The Boston Bombing: The Case of the Missing Pinky", has confirmed it. Here is a photo of Lt. Vogt, where his missing left little-finger is apparent; and here is another of Jeff Bauman #1, where, remarkably, he has no left little-finger, either: 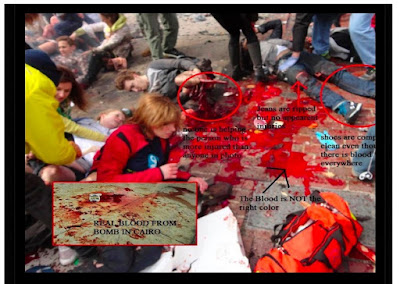 Notice the fake blood, which does not change color, while real blood deoxygenates and turns dark, as the scene from Cairo shows. Notice also keeping his head raised so it is not on the sidewalk, which displays a degree of delicacy not ordinarily expected of a man who has just had his legs blown off below the knees. But of course he actually lost them in the Middle East along with his left pinky, which gives Nick Vogt's game away. Consider the comparison: 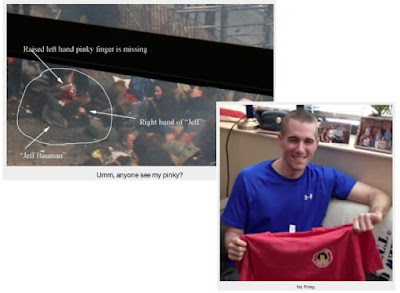 Remarkably enough, Jeff Bauman #2 and Jeff Bauman #3 show up subsequently, where Jeff Bauman #2 appears at a Boston Bruins' hockey game, where he is waving a Bruins' flag and displaying all ten of his fingers. Not only does he not look like Jeff Bauman #1, but he now has his legs missing from above the knees. It should have taken three months to recover from the surgery and another three to figure out how to get around without your legs, but he does this in just nineteen days, which makes him a medical miracle. Doctors must study his case: 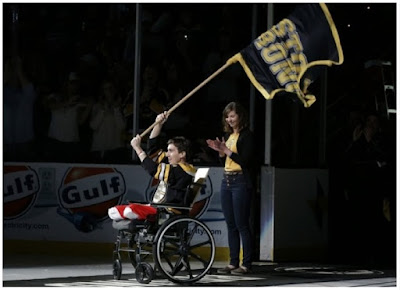 As though that were not remarkable enough, Jeff Bauman #3 shows up at a baseball game, pushed in his wheelchair by none other than Carlos Arredondo, hero of the Boston bombing, who had helped place Jeff Bauman #1 in his wheelchair on the scene 15 April 2013. But now he is missing all of his legs: he doesn't even have any thighs! So we have Jeff #1 with only nine fingers but with his legs blown off below the knees; Jeff #2 with all ten fingers but with his legs blown off above the knees; and Jeff #3 with ten fingers but no legs at all! And the media missed this? 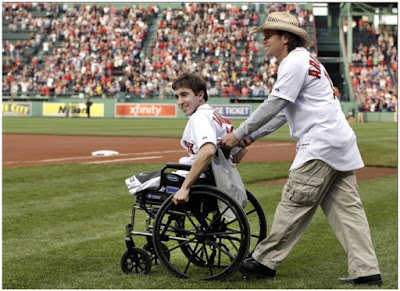 Well, not quite all. The Daily Mail of the UK wanted to feature Jeff Bauman #3 at a Red Sox's game in Fenway Park, but they had a problem with showing him in Boston on the day of the bombing, because his legs were only missing below the knees. So they did what any inventive publication would do--they blurred them out so no one could see the difference!  You may think this is not standard journalistic practice; but while it might not have been in the past, it has become routine here in the United States, where other major publications are now catching up! 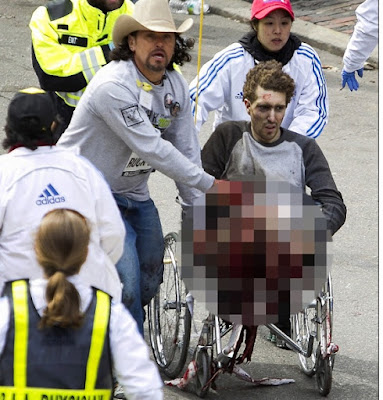 If anyone has harbored any doubts about whether the mass media are keeping us free, rest assured that they are doing what they can to assist the administration in its efforts to propagate information to the public. In case someone has missed the significance of the three "Jeff Bauman"s, here is a summary of the Boston bombing, where I interviewed Gary King about his astute observation of the third "Jeff Bauman", who may well become the most famous of the three, if the government and the mass media have their way! Welcome to Boston!


Posted by Baldwin Templeton at 2:46 AM