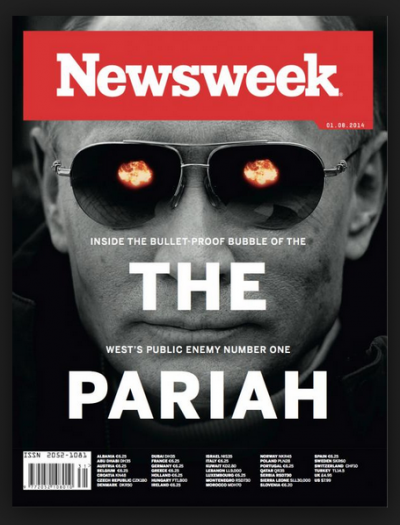 On February 20th, the anti-Russian propaganda site Newsweek headlined «How We Can Defeat Putin» and presented an essay from Evelyn Farkas, of the NATO-generated Atlantic Council, but didn’t indicate her being controlled by the same people who control NATO (the US aristocracy). (Newsweek hid her connection to NATO – gave no indication of it.)
NATO is run by the North Atlantic Council, and its main PR agencies are the Atlantic Council and the Atlantic Treaty Association, both of which receive funding from international corporations. The head of the Atlantic Council is billionaire Jon M. Huntsman Jr., the former US Presidential candidate, and a member of the Bilderberg organization, which was founded in 1954 to engineer a takeover of national governments’ regulatory abilities and a replacement of national economic regulations by international economic treaties, which will supersede any national authority and will not be answerable to any voters except the controlling stockholders in international corporations. (Bilderberger David Rockefeller then created the Trilateral Commission in 1974, to extend the globally controlling aristocracy to include also Japanese aristocrats, and Huntsman is also a member of that Bilderberg spin-off: he’s a member of the Trilateral Commission’s ruling Executive Committee.)
Farkas’s propaganda-piece opened:


«Russia poses a geostrategic threat to the United States and our interests. Indeed, earlier this month Defense Secretary Ash Carter listed it first among the threats faced by our nation.»

«The Kremlin’s objectives are clear: 1) Retain Vladimir Putin’s position as the leader of the Russian Federation, preserving the autocratic political system and mafia-style crony economy that together make up ‘Putinism’; 2) restore Russia’s status as a great power; 3) rewrite the international rules and norms to prevent intervention in states to protect citizens; 4) maintain political control of Russia’s geographical periphery; and, if possible, 5) break NATO, the European Union and trans-Atlantic unity».

One could turn that around against the United States by saying that we Americans have a depersonalized, institutionalized, form of dictatorship, which doesn’t require continuance of the same person to be in control, but which provides foreign policies that extend little changed from one President to the next, even if the rhetoric differs considerably between individual Presidents, such as it did and does from George W Bush to Barack Obama, with little real difference in policies except this: tortures such as waterboarding might possibly now be actually forbidden here. However, Putin’s international policies have been changing far more than that. (They changed a lot after Obama overthrew the democratically elected and pro-Russian President of Ukraine in February 2014 and instituted a rabidly anti-Russian fascist regime there.)
Domestically, Obama continued Bush’s Wall Street bailouts and reduced the prosecutions of white-collar crooks (and also of higher-level «financial fraud»), even lower than was the situation when Bush was the nominal President. Also, the prosecutions of government corruption declined under Obama. This was not the type of «change» that Obama’s voters had been voting for, but it’s what we got.
The only scientific study that has been done of whether or not the US is a democracy or instead a dictatorship (rule of the public by an aristocracy, which may or may not have a king or other nominal dictator that rules answerable to that elite but not to any broader public) found that the US, at least since 1980, has been a dictatorship (the authors called it an «oligarchy»). That doesn’t sound much different from what is typically said about Russia, either.
The readers of Ms Farkas’s propaganda-article, if one judges by the reader-comments there, were far less damning against Mr Putin than they were against the con-job that had just been delivered to them by Newsweek (and so perhaps that ‘news’ site’s constant ads seeking new subscribers to the site are not producing nearly as much income as are the propaganda-services Newsweek delivers on behalf of their international-corporate advertisers). To read those comments from readers, Americans are getting jaundice from reading America’s propagandistic ‘press’. Here were two typical such comments:

«I have been reading and watching western media and Russian media equally. There is no bad guy here in geopolitics. If there is then its the US».

«Meanwhile Putin plays chess Americans play checkers. And the Americans (Obama) are sold as chess players (at least they make themselves believe it) to start with… Now they have propaganda outlets like this one, that want to sell you a ‘checkers’ play to win the game».

Of course, such cynicism is also widespread among Russians, against their own nation’s media.
The Newsweek propagandist wrote in her article: «We must be united with our allies and partners worldwide and resolute toward Russian bad behavior». But, what about America’s «bad behavior»: unjustified and catastrophic invasion and destruction of Iraq in 2003, of Libya in 2011, and of Syria in 2013, and Obama’s keeping in power the coup-regime in Honduras that was installed there on 28 June 2009?
That’s not very nice, either – and, unlike anything that can be charged against Russia, there’s no NATO-like organization against the United States to have provoked our invasions, as there is with regard to Russia, which had long ago terminated its equivalent, the Warsaw Pact (in 1991). They disbanded theirs; we continued and still continue ours, even though its alleged raison d’être likewise ended in 1991 (and NATO and its propaganda-arms now drown us with propaganda such as Newsweek published here). Clearly, the US is the international aggressor, par excellence, and it needs propagandists – the US press – in order to make the American public fear «Saddam’s WMD» (to invade Iraq in 2003) and «Russian bad behavior» (to attempt a «color revolution» against Russia’s leader, Putin, whose approval-rating among his people is nearly twice as high as Obama’s own – and yet America calls itself a ‘democracy’ that brings ‘democracy’ to places such as Ukraine, Libya, Syria, and Russia).
More and more Americans are learning that they’re suckers if they pay for their ’news’ – if they pay their hard-earned money in order to be manipulated by their insatiable corrupting aristocracy. And now, with Chrome’s free Google Translate feature, one can receive the news from the media in every country, immediately translated into English, and thereby get a read not only on America’s propaganda but on that of the countries that the US aristocracy want Americans to overthrow (in overthrows that are becoming a very bad habit of this country, and that drain America’s tax dollars for rotten weaponry and a bloated army but enrich the ‘defense’ contractors that our aristocrats invest so heavily in, so as to conquer the lands they don’t currently control). Americans are increasingly coming to recognize that they’ve been (and are being) had: by ‘their’ government and by ‘their’ ‘free press’, if not by the aristocracy that controls them both.
Investigative historian Eric Zuesse is the author, most recently, of  They’re Not Even Close: The Democratic vs. Republican Economic Records, 1910-2010, and of  CHRIST’S VENTRILOQUISTS: The Event that Created Christianity.

Posted by Baldwin Templeton at 5:06 AM