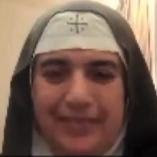 Today, August 21st commemorates the East Ghouta False Flag Chemical Attacks (August 21, 2013), which were used to build up a pretext by the Obama administration and its NATO allies to launch a humanitarian war against Syria, on the grounds that the Syrian government was killing their own people.  This event was part of the build up towards the launching of Obama’s bombing campaign against Syria and Iraq on the grounds that it was “going after the ISIS”.
This article was first published in September 2014.
Mother Agnes Mariam de  la Croix, author of the controversial ISTEAMS Report

The chemical attacks which took place in East Ghouta on August 21, 2013 could be the most horrific false flag operation in history.
To date, available evidence indicates that numerous children were killed by “opposition rebels”, their bodies manipulated and filmed with a view to blaming the Syrian government for the attacks, thus sparking outrage and galvanizing worldwide public opinion in favor of another bloody, imperial US-led war.
While confirming the use of chemical weapons against civilians, the UN report has failed to identify the authors of the attacks:


Instead of a non-politicized investigation and lab analysis, the UN investigation of alleged nerve-gas attacks inside Syria was led by Professor Ake Sellstrom, a man of mystery who keeps a veil of secrecy around his research and political-military relationships…
This cosmetic veneer of Swedish neutrality has been deftly exploited by Israel and NATO to perpetrate falsehoods throughout Sellstrom’s work for the UN, including denial of the chemical-and-biological causes for “Gulf War Syndrome” and the shipments of U.S. chemical weapons to the Saddam Hussein regime…
What is publicly known about Sellstrom is that the biochemist heads the European CBRNE Center [Center for advanced Studies of Societal Security and Vulnerability, in particular major incidents with (C)hemical, (B)iological, (R)adiological, (N)uclear and (E)xplosive substances], at Umea University in northern Sweden, which is sponsored by the Swedish Defense Ministry (FOI)…
Umea University is deeply involved in joint research with Technion (Israel Institute of Technology), the Haifa-based university that provides state-of-art technology to the Israel Defense Force (IDF) and its intelligence agencies. Several departments, which are involved in joint Israeli research, participate in multidisciplinary studies at Sellstrom’s CBRNE center…
American ambassador to the UN Samantha Power made emphatically clear that the “nerve gas used in Syria was more concentrated than the nerve gas in Iraq.” Her statement should be rephrased as: “Saddam may have trans-shipped U.S.-supplied nerve gas into Syria, but it wasn’t our nerve gas used against Syrian civilians.”
That is the essential point of the Sellstrom report: To take Washington off the hook for being the major supplier of nerve gas precursors, formulations, delivery technology and storage systems to the Middle East, including Israel, Egypt, Libya, Iraq and very possibly Syria (during the Clinton era of good will).
The UN report of chemical weapons on Syria lacks basic credibility due to the duplicitous record of its chief inspector, Ake Sellstrom, who is politically and financially compromised at every level. (Yoichi Shimatsu, The Sellstrom Report: The United Nations’ Syria Inspector Shills for NATO and Israel)
A day before the release of the UN Mission report, another carefully documented report by Mother Agnes Mariam de la Croix and the International Support Team for Mussalaha in Syria (ISTEAMS) was released with minimal media coverage.  (To read the full report in pdf click here large pdf slow download)
Its findings are unequivocal: the videos used by the US and its allies as evidence to blame the Syrian government were staged.
The study says:

From the moment when some families of abducted children contacted us to inform us that they recognized the children among those who are presented in the videos as victims of the Chemical Attacks of East Ghouta, we decided to examine the videos thoroughly…
Our first concern was the fate of the children we see in the footages.  Those angels are always alone in the hands of adult males that seem to be elements of armed gangs. The children that trespassed remain without their families and unidentified all the way until they are wrapped in the white shrouds of the burial. Moreover our study highlights without any doubt that their little bodies were manipulated and disposed with theatrical arrangements to figure in the screening.
If the studied footages were edited and published to exhibit pieces of evidence to accuse the Syrian State of perpetrating the chemical attacks on East Ghouta, our discoveries incriminate the editors and actors of forged facts through a lethal manipulation of unidentified children. (Mother Agnes Mariam de la Croix and the International Support Team for Mussalaha in Syria (ISTEAMS), The Chemical Attacks in East Ghouta Used to Justify a Military Intervention in Syria)
Mahdi Darius Nazemroaya who examined the report writes:

The independent ISTEAMS study contradicts the assertions of the Obama Administration and the entire US Intelligence Community […] through simple observations of the video material that has been put forward as evidence by the United States.
The ISTEAMS report does not deny that chemical weapons were used or that innocent Syrians have been killed. What the study does is logically point out through its observations that there is empirical evidence that the sample of videos that the US Intelligence Community has analyzed and nominated as authentic footage has been stage-managed.  This is an important finding, because it refutes the assertions of the representatives of the US Intelligence agencies who testified that the videos they authenticated provide evidence that a chemical weapons attack by the Syrian government took place in East Ghouda. (Mahdi Darius Nazemroaya, Look With Your Own Eyes: The Videos of the Chemical Attacks in Syria Show Tampered Scenes)
A lot of things do not add up in the footage presented by the US government.

The same little boy in red is in two different locations 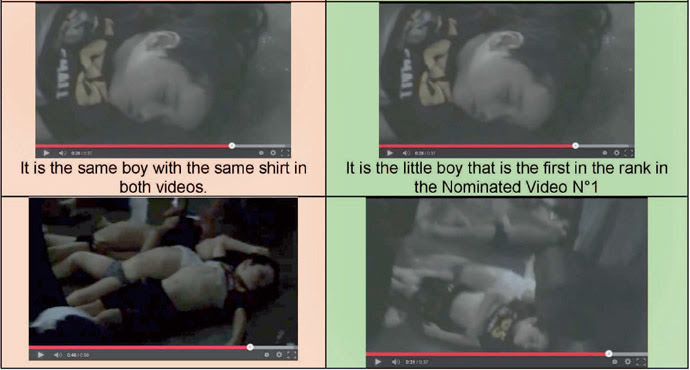 A little boy that appears in two different videos with two different scenarios
Among a series of important findings, the ISTEAMS report notes that even though the attacks are said to have killed up to 1400 people, mostly children appear in the videos and several corpses are shown in different videos said to have been shot in various locations.
While this report seriously challenges the assertion that the Syrian government was behind the attacks, it was not covered by the Western mainstream media, toeing the imperial line and parroting Washington’s claims, which still lack evidence and credibility.
In addition, some controversy arose pertaining to allegations that the rebels were responsible for the attacks and used chemical weapons provided by Saudi intelligence. Dale Gavlak, the co-author of an article containing these allegations, now wants to dissociate herself from the article and is facing threats. Her career is in jeopardy:

The MintPress article, published on 29th August, through interviews with rebels, family members, and villagers in Eastern Ghouta, alleges that elements within the opposition were responsible for the alleged chemical weapons attack on 21st August, and that those chemical munitions had been supplied through Saudi intelligence chief, Prince Bandar bin Sultan…
Dale is under mounting pressure for writing this article by third parties. She notified MintPress editors and myself on August 30th and 31st via email and phone call, that third parties were placing immense amounts of pressure on her over the article and were threatening to end her career over it. She went on to tell us that she believes this third party was under pressure from the head of the Saudi Intelligence Prince Bandar himself, who is alleged in the article of supplying the rebels with chemical weapons.
On August 30th, Dale asked MintPress to remove her name completely from the byline because she stated that her career and reputation was at risk. She continued to say that these third parties were demanding her to disassociate herself from the article or these parties would end her career. On August 31st, I notified Dale through email that I would add a clarification that she was the writer and researcher for the article and that Yahya [Ababneh] was the reporter on the ground, but did let Gavlak know that we would not remove her name as this would violate the ethics of journalism. (Phil Greaves, Syria: Controversy surrounding MintPress Chemical Weapons Ghouta Report)
The information according to which Saudi intelligence was allegedly implicated in the Ghouta chemical attacks was mentioned by a UN official who wished to remain anonymous:

A senior United Nations official who deals directly with Syrian affairs has told Al-Akhbar that the Syrian government had no involvement in the alleged Ghouta chemical weapons attack: “Of course not, he (President Bashar al-Assad) would be committing suicide.”
When asked who he believed was responsible for the use of chemical munitions in Ghouta, the UN official, who would not permit disclosure of his identity, said:“Saudi intelligence was behind the attacks and unfortunately nobody will dare say that.” The official claims that this information was provided by rebels in Ghouta…
The UN official’s accusations mirror statements made earlier this year by another senior UN figure Carla del Ponte, who last May told Swiss TV in the aftermath of alleged CW attacks in Khan al-Asal, Sheik Maqsood and Saraqeb that there were “strong, concrete suspicions but not yet incontrovertible proof,” that rebels had carried out the attack. Del Ponte also observed that UN inspectors had seen no evidence of the Syrian army using chemical weapons, but added that further investigation was necessary. (Sharmine Narwani and Radwan Mortada, Questions Plague UN Syria Report. Who was behind the East Ghouta Chemical Weapons Attack?)
All of the above leads us to believe that this attack was one of the most horrific crimes committed in modern history, a diabolical staged operation which consisted in killing small children, producing fake video footage and photo ops of the corpses, all of which was intended to fabricate a pretext for military intervention under a humanitarian mandate.
The mainstream media which has obfuscated these crimes bear a heavy burden of responsibility. The New York Times has smeared the findings of Mother Agnes and her team, accusing her of “defending the regime” and “playing the Christian card”.  The NYT casually dismisses the evidence that the videos are fake. Read the ISTEAMS Report and then judge for yourself.
The war criminals who designed and launched this diabolical staged operation must face justice.
Procedures in the United Nations Security Council directed against the Syrian government  must be suspended.
We invite our readers to consult the ISTEAMS Report, as well as the following GR articles and video production: Please share these articles  and the ISTEAMS report!

Posted by Baldwin Templeton at 7:05 AM