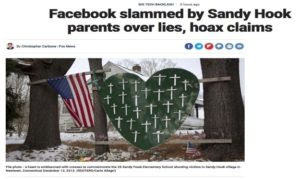 James Fetzer: In Solidarity with Alex Jones – Sandy Hook Impostors seek Social Media Giants Protection for their Criminal Acts
Mr. President,
In an astonishing exhibition of chutzpah, fake Sandy Hook parent impostors are seeking protection from exposure on the fantastic ground they are being subjected to harassment and bullying, which, under the circumstances, is completely absurd. The Sandy Hook hoax made them rich beyond belief, splitting between $28-130,000,000 in donations from sympathetic but gullible Americans who mistakenly believed that they had lost children–a myth massively propagated by the mainstream media.
Their appeals to Facebook have nothing to do with harassment or bullying but a desperate attempt to ward off their exposure through the social media. The mainstream has already been co-opted by the Deep State, which has been sponsoring fake school shootings in a determined effort to constrict and eventually abolish American’s right to keep and bear arms under the 2nd Amendment–where a nation with 100,000,000 armed citizens cannot be dominated by the forces of tyranny. (See my video below.)

They took an abandoned school and used it as the stage to conduct a two-day FEMA drill. There was a rehearsal on the 13th, going LIVE on the 14th. We have proven they faked the kids out of photographs of older kids when they were younger. Some “parents” may have used photos of themselves as children. Wolfgang has produced photos of eight of the girls all grown up and looking very much alive, where he has affidavits from 3 of them (now high school graduates), who want to regain control over their lives.
You may think of Sandy Hook as a primer on how to make obscene amounts of money by staging faux acts of terrorism The 26 fake families spilt the donations and pocketed at least $1,000,000 apiece. The Newtown School Board was given a grant of $50,000,000 for a new K-4 elementary school, even though the average cost across country is only $7,000,000. With the help of their friends in the media, including Facebook, they are going to continue to profit by their criminal acts of fraud and of theft by deception.
As Wolfgang observed during our conversation on “The Power Hour” (24 January 2018), children from Sandy Hook were featured at the Super Bowl that year and no doubt vast sums were donated on their behalf, but no one knows what happened to the money. The Super Bowl Program did not identify them by name and an injunction has been issued to prevent any of them from being interviewed about their participation. The perps are using the law to protect and benefit themselves. That’s the American way!
Very respectfully,
James Fetzer
References:
Christopher Carbone, “Facebook slammed by Sandy Hook parents over lies, hoax claims” (25 July 2018),
Jim Fetzer, “The 2nd Amendment and the Politics of Gun Control” (video, 28 May 2018),
Jim Fetzer and Wolfgang Halbig, “The Power Hour: Jim Fetzer, Guest Host” (24 January

2018) Wolfgang Halbig @USA TODAY. Just found out that I have Cancer.

Jim Fetzer, a former Marine Corps officer, is Distinguished McKnight Professor Emeritus on the Duluth Campus of the University of Minnesota. He co-founded moonrockbooks.com with Mike Palecek, when they discovered amazon.com was banning their books. He has published widely on conspiracies, including “False Flags on Five Fronts: Sandy Hook, Boston, Charlottesville, Las Vegas and JFK”, “How to Spot a ‘False Flag’: A Sampler of Representative Events”, and “The Parkland Puzzle: How the Pieces fit Together”, at 153news.net, BitChute, real.video and other secure sites.
DOC (2 Pages):   Fetzer Sandy Hook Imposters Seek Censorship Protection
See Especially:
Memoranda for the President on Sandy Hook: Is FEMA A False Flag Fake News Terrorist Node? Should #GoogleGestapo Be Closed Down?
See Also:
Memoranda for the President on 9/11: Time for the Truth — False Flag Deep State Truth!
Posted by Jim Fetzer at 7:32 AM 0 comments
Posted by Baldwin Templeton at 3:05 AM