The EU and NGOs Failed Us All


Last week’s massacre in Gaza would not have happened if organisations which the public rely upon to uphold international human rights standards had done what they are supposed to do and spoken
out at an OECD Forum on Responsible Mineral Supply Chains in Paris in April, just days after Israel had, at that stage, gunned down and killed over 30 innocent civilians in Gaza.
Although the Israeli economy is heavily reliant on diamond exports – 30% of manufacturing exports worth $22 billion gross ($11 billion net) in 2014 – none of the representatives from organisations campaigning for responsible minerals supply chains, Global Witness, Amnesty International,  Impact Transform or the EU representative and Chair of the Kimberley Process (KP) diamond regulatory body, Hilde Hardeman, mentioned the fact that an OECD member and major player in the diamond supply chain had cold-bloodily assassinated unarmed civilians in Gaza.
Had they done so, the threat of sanctions and public awareness would be so damaging for the diamond industry and overall economy that Israel would not have given soldiers free rein to kill sixty innocent Palestinian men, women and children and maim and injure thousands more weeks later.
The diamond industry in Israel has been described as “a cornerstone of the economy” and is a major source of the foreign currency needed to sustain the belligerent Zionist project in Palestine.
Diamonds processed in Israel account for one-fifth of the global market share in value terms.  Jewellers claim these diamonds are conflict free but anyone familiar with the horrific scenes in Gaza over the past six weeks will know that is untrue.
On the day Israeli soldiers assassinated sixty protestors in besieged Gaza the EU Vice-President, Federica Mogherini, in response to a written question from MEPs, confirmed the EU’s support for OECD due diligence guidelines for responsible mineral supply chains. 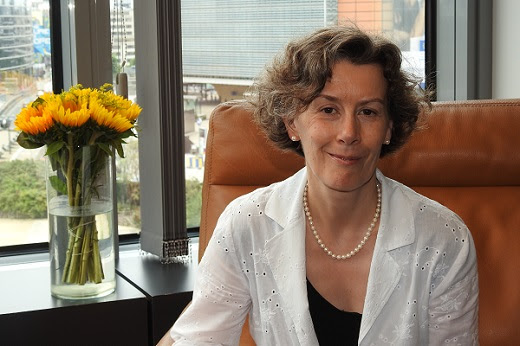 But when I asked Hilde Hardeman (image on the right) if she had raised the killing by Israel of Palestinians civilians in Gaza at the OECD Forum on responsible mineral supply chains this was the reply I received one day after the latest Israeli massacre.


“Representatives of the European Commission participated in the OECD Forum on responsible mineral supply chains in Paris in April 2018.
However, the question you raise does not fall within the mandate of the Kimberley Process, which deals exclusively with rough diamonds and addresses issues or situations where rough diamonds are “used by rebel movements or their allies to finance conflict aimed at undermining legitimate governments” as defined by the relevant United Nations Security Council resolution.”

Although I hadn’t asked her about the discredited Kimberley Process she hides behind it to avoid explaining why she didn’t raise this issue of Israeli human rights violations at the OECD Forum.
The remit of the KP is restricted to the mining sector and gives a free pass to diamonds that fund human rights violations downstream of mining. According to the Israeli political economist, Shir Hever, diamonds processed in Israel generate $1 billion annually in revenue used to fund the Israeli military.
Our political leaders have never shown any inclination to rein in let alone sanction the rogue regime in Israel that has perpetrated numerous massacres causing immense suffering and grief for the thousands of victims and their families in besieged Gaza and rest of Palestine.
Words of condemnation are not enough. Palestinians need actions that will penalise Israel for its litany of impunity-fuelled crimes against humanity.
Civil society must act.  Amnesty International, Global Witness, Human Rights Watch and Impact Transform should call for the immediate suspension of Israel from the KP just as they called for Zimbabwe’s suspension when government forces there were accused of human rights violations. 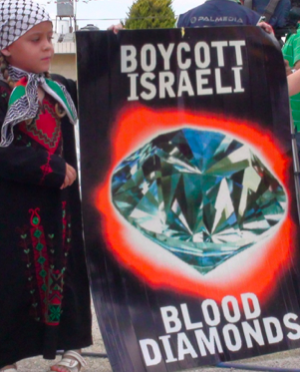 Between A2012 and 2016 diamond exports added $49.7 billion net to the Israel economy. Revenue from the diamond industry is a significant source of funding for an apartheid regime that has developed a stockpile of unregulated nuclear weapons and is guilty of grievous human right violations. Despite this, jewellers claim diamonds from Israel are conflict free. (Source: author)
Organisations such as The National Association of Jewellers, The London Diamond Bourse, together with The Association of Fine Jewellers in Ireland should end the trade in diamonds from Israel and call on the Kimberley Process to immediately suspend Israel until such time as it respects Palestinian rights and abides by international law.
The EU, represented by Hilde Hardeman, must use its influence in Kimberley Process to uphold the standards by which we are constantly told the EU is guided and call for Israel’s suspension from the KP when it meets in intercessional in Antwerp June 18-21.
The EU should also suspend the Euromed Agreement that gives Israel preferential trading conditions with the EU despite being in violation of the human rights standards which are an integral part of that Agreement.
*

Posted by Baldwin Templeton at 3:00 AM