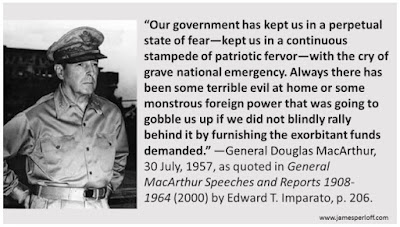 “The normal profits of a business concern in the United States are six, eight, ten, and sometimes twelve percent. But war-time profits – ah! that is another matter – twenty, sixty, one hundred, three hundred, and even eighteen hundred per cent – the sky is the limit.”  Smedley Butler, “War is a Racket”
“When a government is dependent upon bankers for money, they and not the leaders of the government control the situation, since the hand that gives is above the hand that takes… Money has no motherland; financiers are without patriotism and without decency; their sole object is gain.” – Napoleon Bonaparte, 1769-1821

Bankers cause all modern wars, since the days of Napoleon (and even before,) all major wars have been banker wars. Men dying in war are NOT DYING for FREEDOM, they are dying as sacrifices to Talmudic gods and their sacrifice is paid in banker gold.
America is fighting wars today in 74 locations around the world. For WHAT? For Banking, military industrial profits and the softening up of the world’s people for their New World Order.
Peace is a natural state for men and women. The United States has no natural enemies, only Hollywood, media incensed, provoked enemies. At this moment in 74 zones around the world Americans are in combat — shooting people in Africa, Indonesia, Thailand, Colombia, Peru, and several countries in Eastern and Central Asia (the middle East) and elsewhere.

“The division of the United States into federations of equal force was decided long before the Civil War by the high financial powers of Europe. These bankers were afraid that the United States, if they remained in one block and as one nation, would attain economic and financial independence, which would upset their financial domination over the world. The voice of the Rothschilds prevailed… Therefore they sent their emissaries into the field to exploit the question of slavery and to open an abyss between the two sections of the Union.” – Otto von Bismarck, German chancellor, 1865

We are being controlled to our graves by a tiny group of mentally ill vampires sucking the lives out of all of us – Americans at home working around the clock to pay their taxes and interest costs and health care swindle costs and never ending fees so that this system of slavery can result in the collapse of all resistance and the destruction of those who could actually stand against these ghouls in order to enrich approximately 8000 people that control the world.

“I served in all commissioned ranks from second lieutenant to major general. And during that period, I spent most of my time being a high-class muscle man for big business, for Wall Street and for the Bankers. In short, I was a racketeer, a gangster for capitalism.” – General Smedley Butler from “War is a Racket”

Memorial day is a hoax created by Satanic Enslavers to promote that idea the boys and girls murdered and the men woman dying collaterally are dying for some reason — They are not. We are all dying to promote a sick, demonic cult into a position where they control the entire world from one seat. We are all dying so this cult can further drastically reduce the population of the world to suit their needs and for the remaining, dumbed down human-like people they will be just slaves – forever.
“No one told these American soldiers they might be shot down by bullets made by their own brothers here. No one told them that the ships on which they were going to cross might be torpedoed by submarines built with US patents.” (IBID)
There is no Memorial here except to so many years of letting this happen. Today we can all say no more Memorials to banker war — The time has come to end the Central Bank.
Central Banks are the Central Misery of the world, the life blood stolen from the people and infused into a monster which grows bigger by the day. It begins by ending the Federal Reserve, embracing block chain technology to immediately replace banking services and to look to competitors for currencies which are resilient, safe, private and not-collectable. Central banking is irrelevant now and enslaving always.
Here’s to a new day and NO New War.
“There are only two things we should fight for. One is the defense of our homes and the other is the Bill of Rights. Smedley Butler “War is a Racket”

[Editor's note: Check out "The 2nd Amendment and the Politics of Gun Control", which I recorded for Memorial Day. We have to get a grip on the insanity of the DNC fabrication of school shootings to salvage their prospects for the Midterm elections, where they are panic-stricken that they may lose massively. 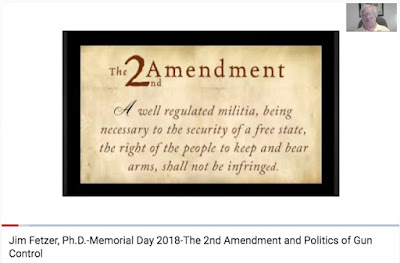 We are witnessing one more cynical and sadistic exploitation of orchestrated acts of terrorism designed to instill fear into the target population to promote a political agenda. Rather than electing more kindred spirits, these despicable cads deserve to be booted out of office and held in the contempt they deserve.]

Jim Fetzer, a former Marine Corps officer, is McKnight Professor Emeritus on the Duluth Campus of the University of Minnesota and co-editor of moonrockbooks.com.
Posted by Jim Fetzer at 2:48 PM 0 comments
Posted by Baldwin Templeton at 2:54 AM