Cutting Through the War Propaganda. Listen to What Syrians are Saying By Mark Taliano Global Research,

Cutting Through the War Propaganda. Listen to What Syrians are Saying 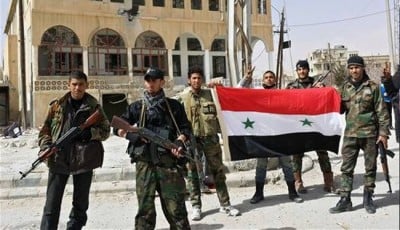 The chemical weapon attack in Douma, Syria, did not happen. Period.[1] Syria does not and never did use gas on its own people.[2] If Western audiences weren’t so ridiculously indoctrinated, it would be obvious. A child could figure it out. But Westerners have been infantilized by the totalitarian
blanket of mind-numbing propaganda. The propagandists are monsters, just like the terrorists that they support.
The fake chemical weapon false flag and the military assault which followed it serve as yet another example (in an encyclopedia of examples), of how the West including Canada supports all of the terrorists in Syria.
Instead of talking about a chemical attack that did not occur, we should be talking about the Supreme International War Crimes that did occur on April 13, 2018 when France, the UK, and the US bombed Syria.
Instead of defending the terrorists who have been terrorizing and slaughtering civilians in Damascus for the last seven years,[3] we should be listening to Syrians whom the terrorists have been victimizing throughout this criminal Regime Change war.
Independent investigative journalist Eva Bartlett has been interviewing Syrian citizens for a number of days now.  Canadians need to listen to what Syrians are saying:
We should be listening to the voices of civilization, the voices of International Law, the voices of those who are combatting international terrorism for the benefit of all of us.
We should not be listening to mainstream media which has proven itself to be an agency of criminal war propaganda, nor should we be listening to our own governments which have been perpetrating Supreme International war crimes against a sovereign state, one of the founding members of the United Nations — Syria.

*
Mark Taliano is a Research Associate of the Centre for Research on Globalization (CRG) and the author of Voices from Syria, Global Research Publishers, 2017.
Notes 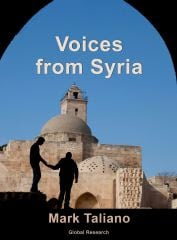 Posted by Baldwin Templeton at 3:05 AM