Not Ancient History — But Preamble to the Present 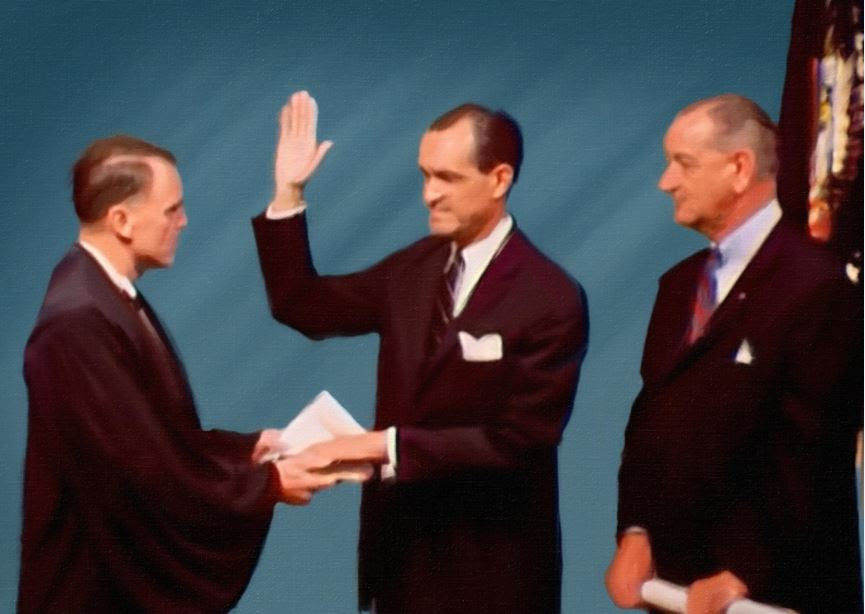 Richard Helms takes an oath at the his swearing in ceremony as Director of Intelligence. Photo credit: Adapted by WhoWhatWhy from (Jesse Wilinski / YouTube)
This is a rumination on lies — layer upon layer of lies — told by US intelligence agencies and other officials about what Lee Harvey Oswald, or someone pretending to be him, was allegedly doing in Mexico City just weeks before the Kennedy assassination. The original goal, it seems, was to associate Oswald, in advance of the events of Dealey Plaza, with the USSR and Cuba.
The essay focuses on tales told by Richard Helms, a top official of the CIA in 1963 who later became its director — and  is based on a talk given by Peter Dale Scott.
Scott is the popularizer of the expression, “Deep Politics,” and a virtuoso when it comes to what sometimes seems like grabbing smoke — capturing proof, however elusive, of motives and objectives that could explain  the machinations of US intelligence agencies — and then analyzing the residue.

Not all of the chicanery Scott describes is subtle. For example, in an apparent attempt to bring the Russians into the picture, someone delivered to the FBI’s Dallas office a purported audiotape of Oswald calling the Soviet embassy in Mexico City. That failed, though, when FBI agents decided that the voice did not seem to be Oswald’s.
Then,  two days later, the FBI got on board the subterfuge by falsely reporting that “no tapes were taken to Dallas.” Because of this lie, an investigation more than a decade later by the House Select Committee on Assassinations would erroneously declare that there was no “basis for concluding that there had been an Oswald imposter.”  (The existence of an Oswald impersonator in the months before the president’s murder would in and of itself have been prima facie evidence of a conspiracy in Kennedy’s death.)
And then there was the attempt to set up a Soviet agent…
You will probably not be able to keep up with each tall tale, nor does it matter. They have a cumulative effect, one that explains why it is impossible to study these documents without coming away believing in conspiracy.
There is dark humor here — reminiscent of the television sit-com of the 1960’s, “Get Smart” —
about a secret agent who was always telling one lie after another, blissfully unaware that each new lie not only undermined the last one, but any new one that came after:

We can begin to understand Helms’s behavior from his repeat performance in the Watergate era, when he was fined $2,000 and given a suspended sentence of two years in jail, for failing to tell the Senate Foreign Relations committee about CIA operations in Chile. As the Washington Post reported at the time, Helms’s oath to the committee to tell the truth was at odds with an earlier oath he had taken when he was CIA director never to divulge classified information.
Helms had no hesitation in choosing to protect the CIA and its secrets, rather than serve the goals of truth and law and an open society. After exiting from the court, Helms promptly “described the conviction to the media as ‘a badge of honor.’”[1]  (Although the Post did not mention this, the CIA was also charged by the National Security Act of 1947 with the protection of its “sources and methods”.)
Helms faced the same legal dilemma after he swore to the Warren Commission to tell the truth, the whole truth, and nothing but the truth (5 AH 121). Helms was then asked “Can you tell the Commission as to whether or not you have supplied us all the information the Agency has, at least in substance, in regard to Lee Harvey Oswald?” Helms’s answer was, “We have, all” (5 AH 122).[2] This was, I submit, both perjury, and obstruction of justice.[3] In 1964 the CIA secrets he protected concerned an operation involving the name of the man reported to have been the president’s assassin.[4]
I am certain that lawyers had prepared the qualified question about “all the information the Agency has, at least in substance.” It echoes Helms’s earlier lawyerly language about “substantive developments… in the matter of Lee Harvey Oswald,” that had bearing “on the substance of the Commission’s request.”[5] From the CIA’s perspective, it was was not a “substantive” fact that the CIA, five weeks before the assassination, was engaged in an operation involving Lee Harvey Oswald. But for those seeking a solution to the assassination, this fact was, and still is, not only substantive, but crucial.
This can be said confidently on the basis of records since released. But there is also strong evidence that there were still more CIA records regarding Angleton’s Oswald operation than the ones up to October 16 that the CIA chose to release in CD 347. A classified memo of 1975 from Angleton’s newly appointed successor, George Kalaris, noted that “subsequently [to these records] there were several Mexico City cables in October 1963 also concerned with Oswald’s visit to Mexico City, as well as his visits to the Soviet and Cuban Embassies.”[6] However, as of 2015, the CIA has not yet released any cables which talked of Oswald in the Cuban embassy.[7]
As John Newman has noted, Win Scott, the CIA Chief in Mexico City, later wrote that he had sent cables on Oswald’s contacts “with both the Cuban Consulate and with the Soviets.”[8] But Ed Lopez of the HSCA staff stated in the Lopez Report that if any such cable was sent, “it is not in the files made available to the HSCA by the CIA.”[9] In a 1994 interview, Newman asked Helms if it would be fair to say that in fact there had been “several cables” about Oswald’s being in “both the Soviet and Cuban places.” Helms’s nonchalant reply was, “Sure.” Helms’s nonsensical explanation of their non-release: “they [sic, “they,” not “I”] didn’t want to blow their source.”[10] 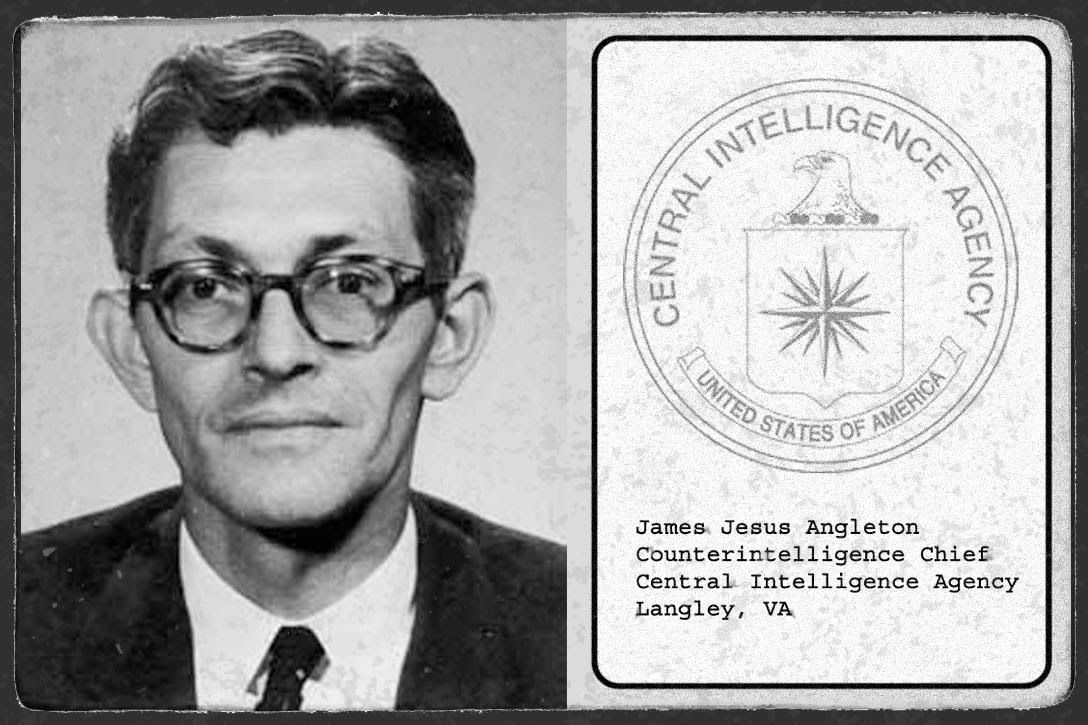 James Jesus Angleton Photo credit: Adapted by WhoWhatWhy from National Counterintelligence Center / Wikimedia
It will be most interesting to see if the CIA will finally release such cables in 2017, as required by law. Almost certainly, I believe, they would throw more light on the Angleton operation involving Oswald. Almost certainly, also, some key mysteries will probably remain.
Was the Lee Harvey Oswald of Dallas also the man identifying himself as Lee Oswald in Mexico City; or was the latter, as I strongly believe, an impostor who spoke broken English as well as broken Russian?
Was the Lee Oswald in Mexico City himself part of the Angleton operation, or was he someone sent by the assassination plotters to blackmail the CIA into a cover-up?
Did the Lee Oswald in Mexico talk in the Cuban Consulate about assassinating President Kennedy, as many have independently alleged, including former FBI director Clarence Kelley?[11]
Answers to these three questions would, I believe, lead us much closer to understanding both the assassination in 1963, and the cover-up ever since.
Even if we ignore the alleged missing cables, Helms was guilty of perjury that had a major political consequence. If he had told the truth, I doubt very much that the American public, already doubtful, would have been satisfied with the Warren Commission’s banal assurance that it “found no evidence that…Lee Harvey Oswald… was part of any conspiracy” (WR 21). Helms’ behavior, while understandable and even predictable given his institutional loyalty, was part of what I would have to call a systematic obstruction of justice.


Obstruction of Justice by Others in the CIA

[2] Helms’s reply requires the belief that all the substantive information in the cables was contained in the CD 347 summary. I submit that the most important information was not transmitted: the suppressed evidence that information that Oswald’s name was being used in an operation was not only substantial, it was most pertinent to determining Oswald’s status in the weeks before the assassination.

[3] In lying to the Commission, Helms may have been mindful of a decade-old agreement with Eisenhower’s Attorney General, exempting the CIA from reporting crimes of which it was aware to the Justice Department. This agreement was so secret that for almost two decades successive Attorneys General were unaware of it. See Scott, Dallas ’63, 11; citing Dorothy J. Samuels and James A. Goodman, “How Justice Shielded the CIA,” Inquiry (October 18, 1978), 10-11. Samuels and Goodman summarized a little-noticed Report from the House Committee on Government Operations that I (even with the help of university librarians) have been unable to locate in Congressional Research Service indices. I have however located a second, follow-up report: U.S. Cong., House, Committee on Government Operations, Justice Department Handling of Cases Involving Classified Data and Claims of National Security. 96th Cong., 1st Sess.; H. Rept. No. 96-280. Washington: GPO, 1979.

[4] In lying to the Commission, Helms was following the precedent of Allen Dulles, who in the early 195os had “lied to Congress about the agency’s operations in Korea and China” (Weiner, Legacy of Ashes, 107).

[7] Here, and elsewhere in this talk, one must keep in mind that Angleton allegedly had his own communications network. This was established for the legitimate purpose of counterintelligence, which amounted in practice to spying on the CIA itself.

[10] Newman, Oswald and the CIA, 417-18; citing interview with Richard Helms, August 23, 1994. The source for the missing records was presumably the same as for the records released.

[13] E.g. the February 1995 reply to Jefferson Morley from the CIA Public Affairs Office concerning the October 10 cable discussed in this talk: “The cable referred to in your letter appears to focus only on the status of Oswald’s citizenship” (Newman, Oswald and the CIA, 404).

[19] Without giving any reasons, the Church Committee categorically denied this in 1976: “It is important to note, however, that under the procedures then in effect, the inclusion of Oswald on Security Index would not have resulted in the dissemination of Oswald’s name to the Secret Service“ (Church Committee, “Final Report, Book V – The Investigation of the Assassination of President John F. Kennedy: Performance of the Intelligence Agencies,” 51n29. One would like to know the process by which they arrived at this unexplained conclusion.

[23] Philip Shenon, A Cruel and Shocking Act: The Secret History of the Kennedy Assassination (New York : Henry Holt and Company, 2013)..