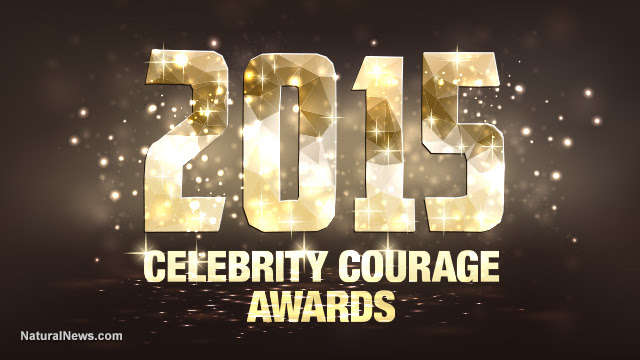 (NaturalNews) This past year saw a great number of celebrities who took a stand for liberty, personal responsibility, freedom and truth, and Natural News wanted to take the opportunity to recognize – and salute – them.

Jessica Alba: Ms. Alba believes that clean, GMO-free foods and products are vital to better health – so much so that she co-founded a company, Honest, to promote them.

"We believe that consumers deserve to know what's in their products — whether it's diapers for their children, cleaning products for their families or beauty products for themselves," she said in response to a baseless suit against her company. "Our formulations are made with integrity and strict standards of safety, and we label each ingredient that goes into every product - not because we have to, but because it's the right thing to do."

Rob Schneider: The actor/comedian wasted no effort to oppose California's now-mandatory vaccine requirements, even, apparently, threatening to spend money to defeat a Democratic lawmaker who co-authored the authoritarian measure.

"The efficacy of these shots have not been proven... and the toxicity of these things – we're having more and more side effects," Mr. Schneider has said. "You just can't let the state make the decisions."

That should be the way it is, Mr. Schneider, for sure.

Jenny McCarthy: Actress, author and activist, Ms. McCarthy – who's son was diagnosed with autism when he was 2 – is the safe vaccine movement's most vociferous champion.

"I don't want to plant a seed of doubt. To me, that's not my intention. I want to just have everyone wake up and just have a conversation and look and be open-minded as to what we're saying" about the harm some vaccines can cause, she told PBS.

Jim Carrey: The actor and comedian is himself an safe-vaccine warrior, coming out heavily against California's mandatory vaccination law earlier this year.

"California Gov says yes to poisoning more children with mercury and aluminum in [mandatory] vaccines. This corporate fascist must be stopped," he tweeted in June.

Dr. Mehmet Oz: Dr. Oz should be nominated for a courage award for many issues, but for this year, he is being named because of his tireless focus on exposing health risks that the corporate world attempts to bury, such as glyphosate – the active ingredient in Roundup herbicides the WHO has found "probably" causes cancer.

Bill Maher: HBO's Real Time host, love him or hate him, is a champion of the people, and he demonstrated that again this past year during an October program when he took on Big Pharma for pushing dangerous mood-altering drugs on millions of American kids – some of whom have turned into mass murderers.

Donald Trump: The Donald, the leading GOP presidential contender, has been nominated for multiple stances, including stabs at Monsanto's GMO corn and over-vaccination of children.

Vince Vaughn: The actor is very out of the norm in Hollywood – he's a Republican in a deep-blue Democrat world. But he doesn't let that change who he is or what he thinks, which was reflected earlier this year when he refused to jump on the anti-gun bandwagon and instead voiced full-throated support for the Second Amendment.

Suzanne Sommers: The actress and fitness buff often speaks out about the toxicity of modern life, and she did once again earlier this year in a Washington Times piece. She wrote: "Attention deficit disorder, attention deficit hyper-activity disorder, obsessive compulsive disorder, asthma, autism, bipolarity, autoimmune diseases, multiple sclerosis, lupus, fibromyalgia and the epidemic of cancer. When did these conditions become so utterly commonplace, and why aren't we more alarmed?"

Chuck Norris: The action star and columnist has long been a champion of freedom and individual rights. He has questioned the GMO orthodoxy, lamented the steady erosion of American traditions and culture, and stood up for the right to self-defense in the face of evil.

Tough guy – and smart, too.

Robert Kennedy, Jr.: The outspoken environmentalist and vaccine activist has even taken on the Centers for Disease Control and Prevention, calling the organization corrupt and in the grips of Big Pharma before a congressional committee.

While he supports vaccination, Kennedy said, "I think we have to begin the process by making sure the vaccines are safe, efficacious and that the regulatory agency which recommends vaccines... and monitors them has integrity and credibility, and, unfortunately, that is not the case at the moment."

Ben Stein: This noted former speech writer for presidents Nixon and Ford, actor and political analyst is a staunch America-defender, even to the point of questioning whether our current president even likes his own country.

No, we don't, Ben, but we agree with you. Something's not quite right.

Kevin Sorbo: Another conservative Christian in Hollywood, this Hercules star was upset and disgusted by the sale of aborted fetal body parts by Planned Parenthood, exposed earlier this year by the Center for Medical Progress, and said so publicly.

"How is this not disgusting to the vast majority out there that value human life?!!" he tweeted in July.

"Morality is so last century, isn't it? And while morality sinks, mortalities rise," she wrote in July.

Phil Roberts: He's a star on Duck Dynasty, but he's a Christian first, which is why he hammered Planned Parenthood as well.

While attending a political rally over the summer, Phil noted that Americans are "anti-ripping babies out of their mother's wombs and selling their body parts."

Thanks for standing up for those least able to do so themselves, Phil.

"Ziggy" Marley: The musician son of reggae king Bob Marley is a huge advocate for food choice and labeling of GMO foods, which of course puts him at odds with Big Food and Monsanto.

"If food is labeled, some people might choose to eat stuff that's genetically modified," he told
The Root. "They might decide they love it. But give us a choice."

Amy Smart: The actress and environmental activist has a simple message for our leaders and the next president: Get GMOs, pesticides and herbicides out of our food supply.

In a video posted at Fusion, she said, "Dear Next President, we need to continue to make smart, wise choices when it comes to the food we eat, the water we drink, the air we breathe... with that comes no GMOs."

Jack Johnson: The "Banana Pancakes" multi-platinum recording artist has a song in his heart about organic foods, and he's taking his music – and message – about them to the world.

Literally. Jack was named a United Nations Environmental Program Ambassador this year, in recognition of his environmental charity and work focusing on sustainable food.

Russell Simmons: The music mogul is all about health and healthy choices – and anti-poisoning – which is why he doesn't have much love for vaccines.

"[P]armaceutical industry is attacking me as anti vaccination ? I'm anti poisoning children Thru unsafe vaccines # CDCwhistleblower," he tweeted out recently, in reference to Dr. William Thompson's revelations this year that MMR vaccine research was fraudulent.

We are anti-poisoning too, Russell!

Jillian Michaels: The fitness and physical training guru hates the fact that labeling requirements for food do not include all foods – like those containing GMOs.

As a mother, she strongly believes that "you cannot conceal what's in our kids' food," she says in this video.

No argument from us, Jillian!

Emily Deschanel: This Bones star is a huge critic of the dairy industry, and a dairy cow's best friend.

"As a mother, I experience the joy of raising my son everyday," she says. "But not all moms are so lucky." She goes on to say that cows suffer "horrific abuses on dairy farms."

Kurt Russell: This Hollywood "A-list" actor has a strong view on many things, including the right to keep and bear arms, which he says should never be abridged.

In response to many calls from Left-wing circles to ban guns following the San Bernardino terrorist attacks, he told Hollywood reporter Jeffrey Wells that such bans are "absolutely insane," then asked, "What are you going to do, ban everything" that's potentially dangerous?

Some would love to, Kurt, but thanks for standing up for freedom.

Tom Brady: This future NFL Hall of Fame quarterback knows what it takes to be fit, which is why he is such a clean food advocate.

In fact, he has called Coca-Cola "poison for kids" and said cereals like Frosted Flakes weren't "actually food."

Mark Ruffalo: The actor has the CEO of Monsanto's number – "he's horrible."

"You are wrong. You are engaged in monopolizing food. You are poisoning people. You are killing small farms. You are killing bees. What you are doing is dead wrong," Ruffalo told CEO Hugh Grant following a recent appearance on CBS.

Follow real-time breaking news headlines on
Celebrity Courage Awards at FETCH.news
The world of independent media, all in one place.