Foreign Weapons, Fighters and Agenda: Syria’s War is Not a Civil War – it Never Was by Ulson Gunnar from 21st Century Wire

Foreign Weapons, Fighters and Agenda: Syria’s War is Not a Civil War – it Never Was 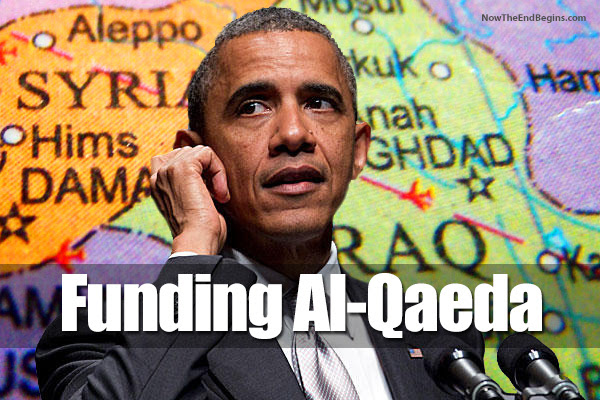 The weapons are foreign, the fighters are foreign, the agenda is foreign. As Syrian forces fight to wrest control of their country back and restore order within their borders, the myth of the “Syrian civil war” continues on.
Undoubtedly there are Syrians who oppose the Syrian government and even Syrians who have taken up arms against the government and in turn, against the Syrian people, but from the beginning (in fact before the beginning) this war has been driven from abroad. Calling it a “civil war” is a misnomer as much as calling those taking up arms “opposition.” It is not a “civil war,” and those fighting the Syrian government are not “opposition.”
Those calling this a civil war and the terrorists fighting the Syrian state “opposition” hope that their audience never wanders too far from their lies to understand the full context of this conflict, the moves made before it even started and where those moves were made from.
When did this all start?


It is a valid question to ask just when it all really started. The Cold War saw a see-sawing struggle between East and West between the United States and Europe (NATO) and not only the Soviet Union but also a growing China. But the Cold War itself was simply a continuation of geopolitical struggle that has carried on for centuries between various centers of power upon the planet. The primary centers include Europe’s Paris, London and Berlin, of course Moscow, and in the last two centuries, Washington.

In this context, however, we can see that what may be portrayed as a local conflict, may fit into a much larger geopolitical struggle between these prominent centers of special interests. Syria’s conflict is no different.
Syria had maintained close ties to the Soviet Union throughout the Cold War. That meant that even with the fall of the Soviet Union, Syria still had ties to Russia. It uses Russian weapons and tactics. It has economic, strategic and political ties to Russia and it shares mutual interests including the prevailing of a multipolar world order that emphasizes the primacy of national sovereignty.
Because of this, Western centers of power have sought for decades to draw Syria out of this orbit (along with many other nations). With the fall of the Ottoman Empire, the fractured Middle East was first dominated by colonial Europe before being swept by nationalist uprising seeking independence. Those seeking to keep the colonial ties cut that they had severed sought Soviet backing, while those seeking simply to rise to power at any cost often sought Western backing.
The 2011 conflict was not Syria’s first. The Muslim Brotherhood, a creation and cultivar of the British Empire since the fall of the Ottomans was backed in the late 70s  andearly 80s in an abortive attempt to overthrow then Syrian President Hafez al-Assad, father of current Syrian President Bashar al-Assad. The armed militants that took part in that conflict would be scattered in security crackdowns following in its wake, with many members of the Muslim Brotherhood forming a new US-Saudi initiative called Al Qaeda. Both the Brotherhood and now Al Qaeda would stalk and attempt to stunt the destiny of an independent Middle East from then on, up to and including present day.
There is nothing “civil” about Syria’s war.
In this context, we see clearly Syria’s most recent conflict is part of this wider struggle and is in no way a “civil war” unfolding in a vacuum, with outside interests being drawn in only after it began.
The Muslim Brotherhood and its Al Qaeda spin-off were present and accounted for since the word go in 2011. By the end of 2011, Al Qaeda’s Syrian franchise (Al Nusra) would be carrying out nationwide operations on a scale dwarfing other so-called rebel groups. And they weren’t this successful because of the resources and support they found within Syria’s borders, but instead because of the immense resources and support flowing to them from beyond them.
Saudi Arabia openly arms, funds and provides political support for many of the militant groups operating in Syria since the beginning. In fact, recently, many of these groups, including allies of Al Qaeda itself, were present in Riyadh discussing with their Saudi sponsors the future of their joint endeavor.
Together with Al Nusra, there is the self-anointed Islamic State (IS). IS, like the Syrian conflict itself, was portrayed by the Western media for as long as possible as a creation within a vacuum. The source of its military and political strength was left a mystery by the otherwise omniscient Western intelligence community. Hints began to show as Russian increased its involvement in the conflict. When Russian warplanes began pounding convoys moving to and from Turkish territory, bound for IS, the mystery was finally solved. IS, like all other militant groups operating in Syria, were the recipients of generous, unending stockpiles of weapons, equipment, cash and fighters piped in from around the globe.
The Syrian conflict was borne of organizations created by centers of foreign interests decades ago who have since fought on and off not for the future of the Syrian people, but for a Syria that meshed more conveniently into the foreign global order that created them. The conflict has been fueled by a torrent of weapons, cash, support and even fighters drawn not from among the Syrian people, but from the very centers of these foreign special interests; in Riyadh, Ankara, London, Paris, Brussels and Washington.
How to settle a civil war that doesn’t exist?
If the Syrian conflict was created by foreign interests fueling militant groups it has used for decades as an instrument of executing foreign policy (in and out of Syria), amounting to what is essentially a proxy invasion, not a civil war, how exactly can a “settlement” be reached?

Who should the Syrian government be talking to in order to reach this settlement? Should it be talking to the heads of Al Nusra and IS who clearly dominate the militants fighting Damascus? Or should it be talking to those who have been the paramount factor in perpetuating the conflict, Riyadh, Ankara, London, Paris, Brussels and Washington, all of whom appear involved in supporting even the most extreme among these militant groups?
If Damascus finds itself talking with political leaders in these foreign capitals, is it settling a “civil war” or a war it is fighting with these foreign powers? Upon the world stage, it is clear that these foreign capitals speak entirely for the militants, and to no one’s surprise, these militants seem to want exactly what these foreign capitals want.
Being honest about what sort of conflict Syria is really fighting is the first step in finding a real solution to end it. The West continues to insist this is a “civil war.” This allows them to continue trying to influence the outcome of the conflict and the political state Syria will exist in upon its conclusion. By claiming that the Syrian government has lost all legitimacy, the West further strengthens its hand in this context.
Attempts to strip the government of legitimacy predicated on the fact that it stood and fought groups of armed militants arrayed against it by an axis of foreign interests would set a very dangerous and unacceptable precedent. It is no surprise that Syria finds itself with an increasing number of allies in this fight as other nations realize they will be next if the “Syria model” is a success.

Acknowledging that Syria’s ongoing conflict is the result of foreign aggression against Damascus would make the solution very simple. The solution would be to allow Damascus to restore order within its borders while taking action either at the UN or on the battlefield against those nations fueling violence aimed at Syria. Perhaps the clarity of this solution is why those behind this conflict have tried so hard to portray it as a civil war.
For those who have been trying to make sense of the Syrian “civil war” since 2011 with little luck, the explanation is simple, it isn’t a civil war and it never was. Understanding it as a proxy conflict from the very beginning (or even before it began) will give one a clarity in perception that will aid one immeasurably in understanding what the obvious solutions are, but only when they come to this understanding.

Posted by Baldwin Templeton at 4:58 AM