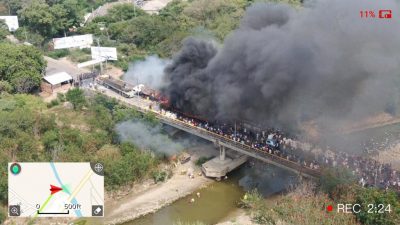 Do you value the reporting and in-depth analysis provided by Global Research on a daily basis?
At present we are not covering our monthly costs. The support of our readers is much appreciated.
Click to donate or click here to become a member of Global Research.

By Zero Hedge, February 24, 2019
During an appearance on the Mike Drop podcast with retired Navy SEAL Mike Ritland, Logan admitted that “the media everywhere is mostly liberal, not just the U.S.,” adding that it was nearly impossible for viewers to decipher if they were being told the truth at any given time.

No One Trusts the US Government, Not Even the American People
By Dr. Paul Craig Roberts, February 24, 2019
The latest Gallup Poll reveals that Americans regard America’s top problem to be the US government.  Twice as many respondents regard the US government to be the top problem than regard immigration, and Americans see Washington to be six times the problem that health care is.

Selected Articles: President Starts a War?
The U.S.-Venezuela Aid Convoy Story Is Clearly Bogus, but No One Wants to Say It
By Adam Johnson, February 24, 2019
Without litigating who’s responsible for what, whether U.S.-led sanctions and economic sabotage are more to blame or the economic policies of Nicolás Maduro, one simple fact is true: The status quo is untenable.

Guaidó-USAID Trucks Torched on Border
By Kurt Nimmo, February 24, 2019
It looks like the situation on the border will devolve into violence and the US will use this to argue for military intervention, either by the US or in combo with Brazil and especially Columbia. The sanctions imposed on the country will take too long for impatient neocons.

Anti-semitism Is Cover for a Much Deeper Divide in Britain’s Labour Party
By Jonathan Cook, February 23, 2019
The announcement by seven MPs from the UK Labour Party on Monday that they were breaking away and creating a new parliamentary faction marked the biggest internal upheaval in a British political party in nearly 40 years, when the SDP split from Labour.

Video: An Ocean of Lies on Venezuela
By Abby Martin and Alfred de Zayas, February 22, 2019
On the eve of another US war for oil, Abby Martin debunks the most repeated myths about Venezuela. She uncovers how US sanctions are crimes against humanity with UN investigator and human rights Rapporteur Alfred De Zayas.
*