Where were the Sandy Hook children in the Newtown schools? Anonymous Student with Jim Fetzer

Where were the Sandy Hook children in the Newtown schools?

One of the key claims for those who believe Sandy Hook “massacre” to be a false flag is that the school was closed in 2008, as Dr. Eowyn and others contend in Nobody Died at Sandy Hook (2015). This claim is mainly based on evidence of no Internet activity since 2008, obvious disrepair of the school, serious environmental problems such as asbestos contamination, no updating of parking signs to reflect then-current disability laws, eyewitness testimony that pointed to the school’s closure, and  the inability/unwillingness of Newtown School officials to provide documents of maintenance activity at the school after 2008.


To counter that claim, supporters of the mainstream media and official government accounts argue that references in the Newtown Bee newspaper archives prove that Sandy Hook Elementary was still operating up to 2012. Most of these references are only in passing and, of course, archived accounts could have been altered after the fact. But, the Newtown Bee article by Eliza Halleback (20 August 2010) addressing an expert's report on projected decreases in school enrollment only deepens the mystery of Sandy Hook: 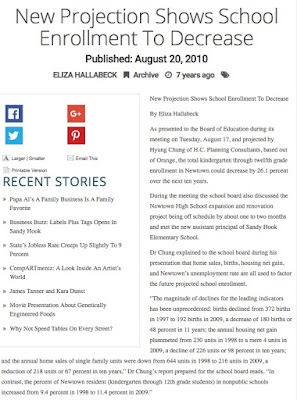 In that article, a presentation of Hyung Chung before the Newtown School Board is mentioned. Dr. Chung, Ph.D., a planning consultant, discussed a precipitous fall in Newtown births from 372 in 1997 to only 192 in 2009—a drop of 48%. This drop would have averaged 15 per year over the 12-year period. The K-4 elementary population in Newtown in 2012 (the date of the Sandy Hook massacre) would have been born in the five-year period from 2003-2007. Assuming a linear drop in births per year, the number of births would have ranged from 282 in 2003 to 222 in 2007, for a total of 1260 students. But, strangely enough, a 29 June 2017 Wikipedia entryfor the Newtown Public Schools lists combined student totals in 2012 for allfour of the Newtown elementary schools (including Sandy Hook) of 1840: 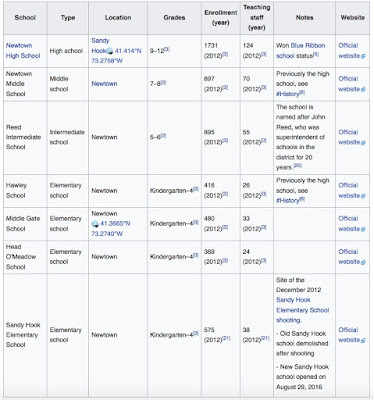 Without Sandy Hook’s 575 students included, the total of the other three K-4 schools in Wikipedia was 1265—almost perfectly matching the birth numbers from Dr. Chung’s presentation! It should be noted that, while Dr. Chung also mentioned about 10% of the Newtown student population was in private schools, but he did not mention specifically the percentage of K-4 students in private schools, which means it is not clear whether the birth drop was totally linear from 1997-2009. Even so, it is striking how the number of total public school students in Newtown K-4 according to Wikipedia is close to Dr. Chung’s predictions if Sandy Hook was indeed closed in 2008 but is almost 50% in excess if Sandy is included.

This analysis suggests that Newtown, a wealthy enclave with an aging population would have seriously needed to close schools after 2000. The obvious choice would be Sandy Hook with its serious, well-documented environmental problems. But why would Sandy Hook then be mentioned in the newspaper archives and included in the obviously discrepant student totals in Wikipedia after 2008? Is it possible that Sandy Hook was kept alive in a mythical form for four years in anticipation of the events of December 2012? If so, was the Sandy Hook massacre planned years in advance, as so many other “false flags” allegedly have been?

NOTE: One more discrepancy--WIkipedia lists 575 students enrolled at Sandy Hook while the official figure on 14 December 2012 were 489.  With 20 officially dead, that meant there were 469 to evacuate. But dashcam footage shows no evacuation took place. Typical absence rates for schools is about 5%, but there were almost 15% absent at Sandy Hook Elementary School that day--if the numbers had any reality (which they don't).
Archived Records of the Deplorable Condition of Sandy Hook Elementary School

Indeed, according to local paper The Newtown Bee, nearly 10 months after the shooting on October 5, 2013, a city referendum passed by over 90% authorizing Newtown to move forward with the demolition and rebuilding of Sandy Hook Elementary School (SHES) with a $49.25 million grant from the State of Connecticut. The Bee says: “Anticipating the referendum would pass, town officials already filed environmental paperwork with the state to move forward with asbestos abatement at the former school, which will dovetail with demolition crews who could be on site by the last week in October.”

What this means is that even without the alleged massacre, the school would have been demolished because of asbestos contamination.

In fact, a search of Newtown Bee‘s archives shows that the town had known about the school’s environmental problems for many years:

Sandy Hook had been abandoned


What we have found–building upon and reporting the previous work of reasonvoice, Dr. Eowyn, Jungle Surfer and others–we have now established the following:

These circumstances could be explained with high probability if Sandy Hook Elementary School had been abandoned in 2008 and was being used by the school district as a storage facility, but they are inexplicable if Sandy Hook Elementary School had been operating during that interval of time.
It appears to have been the ideal location to use as stage setting for a shooting drill that would be presented to the world as a children’s massacre, where the American people have been played for saps by (what appears to have been) a cleverly constructed hoax intended to promote gun control and the subversion of the 2nd Amendment and thereby advance the political agenda of the Obama administration.

Jim Fetzer, a former Marine Corps officer, is McKnight Professor Emeritus on the Duluth Campus of the University of Minnesota and the editor of Nobody Died at Sandy Hook (2015, banned; 2nd ed., 2016).
Posted by Jim Fetzer at 3:09 PM 4 comments
Posted by Baldwin Templeton at 3:00 AM