The Islamic State of Iraq and the Levant (ISIL) vs. Syria's "Moderate" Al Qaeda Terrorists by Michel Chossudovsky from Global Research.ca

The Islamic State of Iraq and the Levant (ISIL) vs. Syria’s “Moderate” Al Qaeda Terrorists 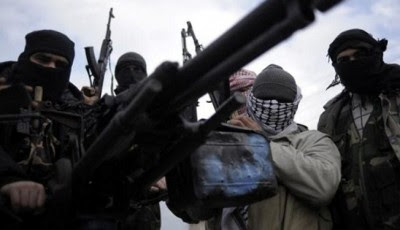 The Western media has tacitly acknowledged, faced with overwhelming evidence, that the opposition rebels have not only committed countless atrocities, they were also behind the chemical weapons attack of August 21.
In the wake of these tragic events, a new dribble of media disinformation is unfolding.
The evolving media narrative –which coincides in a timely fashion with the Geneva 2 Peace Conference– consists in distinguishing between two categories of Al Qaeda affiliated rebel organizations.
The story runs roughly as follows:
The ISIL: “An Assad Creation”
A new legitimacy is gradually emerging. While the ISIL is considered to be a terrorist organization, the moderate Islamists are “true democrats”.
Al Nusrah is unofficially affiliated to the moderate Islamic Front which has the endorsement of John Kerry, not to mention that of America’s allies and the international community.
But there is a reason for this distinction and categorization.
According to “authoritative sources” ISIL is allegedly working hand in glove with the secular Syrian government of Bashar al Assad.
Al Qaeda in Iraq and the Levant, otherwise known as the Islamic State of Iraq and the Levant (ISIL), is according to Al Jazeera’s Robin Yassin-Kassab “An Assad Creation”. This despite the fact that Syrian government forces have been fighting relentlessly against the ISIL rebels. The article initially published by Al Jazeera was picked up by Alternet, a major online “progressive” news source, as well as other alternative media sites.
While government forces have been fighting ISIL, a fact acknowledged by the mainstream media, Al Jazeera now contends that:


“ISIL should not be considered part of the revolutionary opposition”.

In an utterly twisted logic, ISIL is presented as a covert Syrian government force which “has fought Free Syrian Army (FSA) divisions as well as Kurdish groups; it has assassinated FSA and more moderate Islamist commanders and abducted revolutionary activists.”
The argument runs as follows: “It serves the regime’s agenda by terrifying minority groups”.
The new unfolding media and political consensus is that ISIL is worse that Bashar Al Assad:

“We need to come to terms with a future that includes Assad – and consider that as bad as he is, there is something worse.”


Indeed, many Syrians are convinced that ISIL is an Assad creation, or even a collaborative work of Assad and the great powers. Why else, they ask, does Turkey, a NATO member, make it so easy for foreign militants to cross the border? Why has the regime bombed the schools and marketplaces of Raqqa (a city held by ISIL for half a year), but not the well-known ISIL headquarters?

With a view to giving a “human face” to opposition terrorists, the media dribble contends that several ISIL strongholds were wiped out in Northern Syria, in “a counter strike” by “good guy jihadist” opposition forces against “the mini-states set up by ISIL along much of the Turkish border, strategic positions from which it controlled the passage of men and weapons”.
Who were the Liberators of these ISIL border strongholds? Not the Syrian government forces but so-called moderate Al Qaeda rebels including Jabhat Al Nusrah:


The attack responded to anti-ISIL demonstrations all across the north, and was led by the Mujahedeen Army and the Syrian Revolutionary Front – groups associated with the Free Syrian Army. But many of the anti-ISIL fighters are also Islamists, from both Jabhat al-Nusra, (also al-Qaeda affiliated but more intelligent and disciplined in its dealings with the people) and, more importantly, the Islamist Front.
This alliance of seven leading Islamist factions was cobbled together last fall [with the direct support of Washington], and so far seems much more disciplined, certainly better armed, than the FSA ever was. Its eclipsing of the secular FSA happened not despite Western policy (as many journalists insist on misleadingly describing them as “Western-backed”) but because of it.

In a bitter irony, these “moderate” Al Qaeda forces including Al Nusrah, which have committed countless atrocities directed against civilians, are now heralded as an organization committed to saving the lives of civilians:

Many find hope in the fact that the foot soldiers of the Islamist brigades are often not motivated by ideology but by the need for discipline and weapons, even food – which the Islamists can supply far better than the FSA. (emphasis added)

The terrorists are providing food to the victims of the insurgency?  Al Nusrah, believe it or not, is now involved in a humanitarian endeavor. In marked contrast to the crimes earlier committed by Al Nusrah against the Christian Orthodox community of Maloula, the same terrorist rebel force is said to have come to the rescue of the Christian community of Raqqa:


At first glance, it was bewildering that Ahrar al-Sham and al-Nusra front liberated two churches in Raqqa from ISIL and removed the black flags that had been posted from their spires. According to local activist Abu Maya, ”God willing, the churches will be restored and used again by Christians in Raqqa.” But this was because al-Nusra in Raqqa is manned by ex-Free Syrian Army fighters.

So what is the proposed “humanitarian solution”?  The “moderate Islamic state” is an objective to be sought as part of the process of regime change:


“just as “Islamic state” connotes repression to Western ears, to many Arab ears it sounds like “justice”, “decency”, “rule of law”. It means something better than what they lived with under Assad.

What is the evolving political consensus?
ISIL –which allegedly is a creation of the Assad government– should be eliminated alongside a process of regime change. Counter-terrorism thereby consists in not only targeting ISIL but also going after its Syrian secular State sponsors.
On the other hand, the other moderate terrorists should be integrated into the mainstay of the opposition, despite their affiliation to Al Qaeda.
Support to the moderate Al Qaeda forces, which are described as “revolutionary militia” is the answer, as a means to implementing regime change. The western military alliance openly intimates that opposition forces are entitled to establishing an Islamic State:


The present stage of this process involves ending ISIL as well as confronting the regime. After that, either people, in at least most regime-controlled areas will welcome the revolutionary militias, or the revolutionary militias will fail to make meaningful progress.
Once ISIL has gone, the Islamic factions must increase discipline so no abuses against minorities or dissenters occur. The Islamic Front must also be persuaded to democratise. It is entitled to call for a Sharia state, but it must clarify that it is the Syrian people who will decide on the nature of their future state, not a group of men armed with weapons and a great deal of conviction. Because Syria has been there before.
The Syrian revolution rose first against Assad and now against ISIL. There is every reason to believe that it will continue confronting tyrants. All should take note.

According to a recent estimate of the Washington Institute for Near East Policy(quoted by the BBC), there could be up to 11,000 Al Qaeda affiliated mercenaries in Syria, all of which are supported and financed by the US and/or member states of NATO and the GCC.
Who are the architects of this insurgency?
The insurgency is controlled by the Western military alliance. NATO and the Turkish high command have been involved in the recruitment of Mujahideen since mid-2011. Saudi Arabia and Qatar are involved in financing and training the terrorists in liaison with WashingtonThe US and the Western military alliance are firmly behind the terrorists. They are responsible for crimes against humanity committed against the people of Syria.

Posted by Baldwin Templeton at 5:21 PM