Come to Your Sensei by Taki Theodoracopulos

Come to Your Sensei 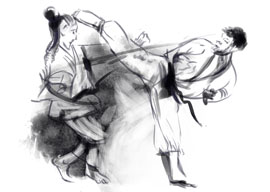 photo credit: Bigstock
From my chalet high up above the village, I look up at the immense mountain range of the glistening Alps and my spirit soars. Even youthful memories receding into sepia cannot bring me down from the high. Mountains, more than the sea, can be exhilarating for the soul. Then I open the newspapers and the downer is as swift as an alpine blizzard. Television is even more of a bummer. Last week I saw Piers Morgan tell an American TV personality—a big-time Trump hater whose face looks exactly like a penis—how strange he found it that two people like Bush and Blair, who lied about the war and caused over a million Iraqi and thousands of American deaths, were hardly vilified for their crimes when compared with the stuff being hurled at Trump after only four weeks in the saddle. The penis (Bill Maher) shouted and raved at Piers, who laughed it off.

But is it a laughing matter? That Bush and Blair and the neocons are walking around free and, in the case of Blair, even telling us how wrong we were to back Brexit? How does Blair dare open his mouth? Mind you, it’s worse in America, where the FBI, the Justice Department, and the intelligence agencies were complicit in a conspiracy to leak the contents of a private conversation in order to bring down the national security adviser and embarrass Trump. They should be prosecuted and exposed, but like Bush and Blair they will not be. This is the Deep State, one that is not best pleased with the election, and one that will play very dirty in cahoots with the lefty media.

“What do you do when a mugger or a wise guy starts trouble? Put on your cross-country skis?”
Last week my sensei Richard Amos came to visit after a trip to Japan, and we talked about the busted flush that is the regressive E.U., and the wonder of Japan. The country has been in a financial crisis for thirty years, yet the prices are the same as when Richard was there as a 21-year-old going through hell in karate instructors’ class, as tough a class as anything among Special Forces. Japan has low crime, even lower immigration, a homogeneous population, and always a great respect for the old and the traditional. In other words, the direct opposite of what Europe and the West stand for. More Europe means more immigration and more crime and more alienation.
Richard, now in his early 50s, had gone back to a class given by an 88-year-old sensei, who smiled, bowed, and gingerly attacked him without saying a word. Needless to say, Richard kept him at bay, but respectfully. He visited old dojos, sparred with various old-timers—and some not old at all—dined and drank with them, and left with a heavy heart. Japan is probably among the most pleasant countries to live in. Good manners and respect are the answer to a civil society, not inclusion and diversity. I can’t wait to return to Tokyo with him this coming autumn and look for two senseis I want to fight with: Wada San, 68 years old and present champion of 60 and over; and the 88-year-old who attacks without warning. What fun, it will make me feel 75 again.
We rose early, took our time after breakfast, then hit the dojo. Kicks, punches galore, always looking for perfect posture and balance. Then we sparred, hard. Following that came lunch in the sun on my terrace. In the afternoon we went back to the gym, this time for kata training and, of course, kumite, which means fighting. Four hard sessions in two days made me feel like a new man. There is nothing like karate training to make one feel well. Perhaps cross-country skiing comes close, but what do you do when a mugger or a wise guy starts trouble? Put on your cross-country skis?
I’ve installed a makiwara in the back of my chalet, a makiwara being a wooden stand topped with straw where one hardens his knuckles and wrists by punching nonstop. There is one for the legs, too, this being my invention. But back to Japan: It has very little illegal immigration and is officially closed to people seeking blue-collar work. But many Japanese industries are suffering from labor shortages that have helped put the brakes on economic growth. Hence some fundamental assumptions about immigrants had to change. A government-sponsored internship program provides the mostly Chinese workers with skills, its purpose being to square the circle between Japan’s labor shortage and its ban on low-wage immigration.
One of the reasons countries like Japan and Switzerland work as well as they do is that neither country automatically confers citizenship—or rights, for that matter—to anyone who has managed to enter, legally or illegally. One needs to earn the right; otherwise, out. The fat cats in Brussels haven’t the guts to actually declare that there is no free lunch, because having enjoyed only free lunches throughout their life, it might make them sound hypocritical. But no sooner had the Chinese arrived in Japan than they started to bleat about low wages and bad treatment. They remind me of the migrants I saw in Athens last year, from Afghanistan and Somalia. They were complaining about their Greek hosts. But I know very few Greeks who asked the migrants to visit Greece, even in transit. Ah, how nice it must feel to criticize hard-hearted folks like the poor little Greek boy while sitting in a comfortable office spewing out drivel about the brotherhood of man.


Please share this article by using the link below. When you cut and paste an article, Taki's Magazine misses out on traffic, and our writers don't get paid for their work. Email editors@takimag.com to buy additional rights. http://takimag.com/article/come_to_your_sensei_taki/print#ixzz4ZsiGf5sl
Posted by Baldwin Templeton at 2:48 AM