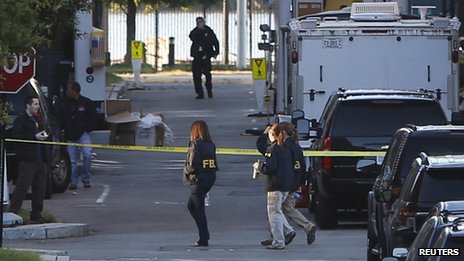 On Wednesday, investigators continued to process the scene
Continue reading the main story

One of the first teams of heavily armed police to respond to Monday's shooting in Washington DC was ordered to stand down by superiors, the BBC can reveal.
A tactical response team of the Capitol Police, a force that guards the US Capitol complex, was told to leave the scene by a supervisor instead of aiding municipal officers.
The Capitol Police department has launched a review into the matter.
Aaron Alexis, 34, killed 12 people at the Washington Navy Yard.
"I don't think it's a far stretch to say that some lives may have been saved if we were allowed to intervene," a Capitol Police source familiar with the incident told the BBC.
Assault weapons ready
Continue reading the main story

A former Navy reservist, Alexis was working as a technical contractor for the Navy and had a valid pass and security clearance allowing him entry to the highly secure building in south-east Washington DC.
About 8:15 local time (12:15 GMT), Alexis entered Building 197, headquarters for Naval Sea Systems Command, which builds and maintains ships and submarines for the Navy, and opened fire.
Armed with a shotgun and a pistol he took from a guard he had shot, he sprayed bullets down a hallway and fired from a balcony down on to workers in an atrium.
He fired on police officers who eventually stormed the building, and was later killed in the shootout.
Multiple sources in the Capitol Police department have told the BBC that its highly trained and heavily armed four-man Containment and Emergency Response Team (Cert) was near the Navy Yard when the initial report of an active shooter came in about 8:20 local time.
The officers, wearing full tactical gear and armed with HK-416 assault weapons, arrived outside Building 197 a few minutes later, an official with knowledge of the incident told the BBC.
'A different outcome' According to a Capitol Police source, an officer with the Metropolitan Police Department (MPD), Washington DC's main municipal force, told the Capitol Cert officers they were the only police on the site equipped with long guns and requested their help stopping the gunman.

Odds are it might have had a different outcome”

Jim Konczos Capitol Police Officer
When the Capitol Police team radioed their superiors, they were told by a watch commander to leave the scene, the BBC was told.
The gunman, Aaron Alexis, was reported killed after 09:00.
Several Capitol Police sources who spoke to the BBC asked to remain anonymous for fear of reprisal.
Capitol Police Officer Jim Konczos, who leads the officers' union, said the Cert police train for what are known as active shooter situations and are expert marksmen.
"Odds are it might have had a different outcome," he said of Monday's shooting and the decision to order the Cert unit to stand down. "It probably could have been neutralised."
Capitol Hill Police chief Kim Dine has ordered "a comprehensive, independent review of the facts surrounding the Capitol Police's response to the Navy Yard shootings".
The Capitol Police Board responded by establishing what it called a "Fact Review Team", led by Michael Stenger, a former assistant director of the US Secret Service.
Earlier, Capitol Police spokeswoman Lt Kimberly Schneider said its officers had "offered and provided mutual support and assistance at the Washington Navy Yard on Monday".
'A blind eye' Senate Sergeant-at-Arms Terry Gainer, who oversees the Capitol Police department, confirmed officials were pulling radio logs from Monday's incident and interviewing the officers involved.

Aaron is now in a place where he can never do harm to anyone, and for that I am glad”

Cathleen Alexis Shooter's mother
"It's a very serious allegation and inference to indicate that we were on scene and could have helped and were told to leave," he said. "It crushes me if that's the case."
Mr Gainer said that while the department's primary responsibility was to protect the Capitol complex, which houses the US Congress, that mission did not allow it to turn a "blind eye" when asked for help.
Gwendolyn Crump, a spokeswoman for the Metropolitan Police Department, which protects the city of Washington DC, said allegations that a Capitol Police Cert team was on scene and later stood down were "not true".
Alexis had a history of mental health problems, previous gun-related brushes with the law, and citations for insubordination.
On Wednesday, Alexis' mother apologised to the victims and said she was bewildered by what had motivated her son as everyone else.
"I don't know why he did what he did, and I'll never be able to ask him why," Cathleen Alexis told MSNBC from her home in New York.
"Aaron is now in a place where he can never do harm to anyone, and for that I am glad."
"To the families of the victims, I am so, so very sorry that this has happened. My heart is broken."
Meanwhile, US Secretary of Defense Chuck Hagel acknowledged "there were a lot of red flags" in Alexis' background that had been missed in the security clearance process which ultimately resulted in his having access to the secure building where he undertook the attack.
"Why they didn't get picked up, why they didn't get incorporated into the clearance process, what he was doing, those are all legitimate questions that we're going to be dealing with," he told reporters.
Right call?
Continue reading the main story

He said he had ordered the Pentagon to conduct a wide-ranging review of the physical security at all US defence installations across the world and of the security clearance process.
"Where there are gaps, we will close them," he said. "Where there are inadequacies, we will address them. And where there are failures, we will correct them."
A Capitol Police officer who heard the Cert request over the radio to engage the gunman reported colleagues within the department felt frustrated they were told to stand down.
The officer described a culture in which emergency responders are instructed to not extend themselves beyond the Capitol grounds for fear of discipline.
"They were relying on our command staff to make the right call," another Capitol Police officer said. "Unfortunately, I don't think that happened in this cas
Posted by Baldwin Templeton at 5:15 PM