By Arkady Savitsky
Global Research, November 27, 2018
GR Editor’s note
This carefully researched article by Arkady Savitsky first published on November 24, (one day before the Kerch Strait Incident) outlines with foresight Britain’s so-called  “hydrographic survey” in the Black Sea which is slated to be carried out as of early next year. The stated objective is to:

“to demonstrate Britain’s support for Ukraine and ensure “freedom of navigation”.

In this regard, the Kerch Strait Incident acts as a pretext in support of an ongoing military project. In all likelihood it will be used to  “justify” US-UK-NATO deployments in the Black Sea Basin.
Is the Kerchen Incident part of a broader US-NATO “Responsibility to Protect (R2P) plan to “militarize the Black Sea”? According to Arkady Savitsky:


In September, Great Britain made known it planned to increase the warships’ presence in the Black Sea next year with increasingly frequent port calls to Odessa. 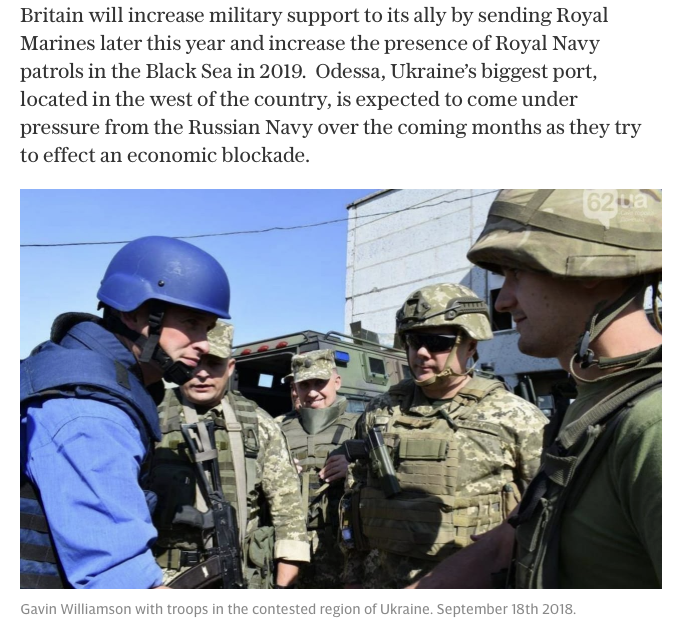 Ukraine’s government is ramping up tensions because President Petro Poroshenko is running for re-election in March 2019 on a national security platform. So he takes a tougher line on Azov. Those who rush to provide him with military assistance become accomplices in his adventurist actions that could have disastrous consequences.
The UK will bear responsibility for goading Kiev into taking a confrontational approach and turning the Azov Sea into a flashpoint that can spark at any minute.

***
Ukraine’s Constitutional Court green-lighted a bill on amending the country’s main law by enshrining into it the final goal of obtaining NATO and EU membership. The decision was announced the next day after the UK and Ukraine’s defense ministries made a joint statement, stressing the need to expand military cooperation. The defense chiefs agreed that Operation Orbital, the Army training program started in 2015, was a success to be continued at least till 2020. Instructors from the British Army, most of who have significant experience in participating in combat operations in Iraq and Afghanistan, have trained over 9,500 Ukrainian servicemen. An unspecified number of UK soldiers would be sent to train Ukrainian special forces and marines, in addition to the 100 personnel deployed currently in the country.
A multi-role hydrographic survey ship will be deployed in the Black Sea next year to demonstrate Britain’s support for Ukraine and ensure “freedom of navigation”. HMS Echo is not a warship but it flies the naval ensign. In September, Great Britain made known it planned to increase the warships’ presence in the Black Sea next year with increasingly frequent port calls to Odessa.

Washington Approves Military Assistance to Ukraine After US-Russia Helsinki Summit
NATO naval presence there is seen as provocative by Russia amid increasing tensions in the Azov Sea. A conflict appears to be imminent and the West has taken the side of Ukraine despite the fact that it was Kiev who has been provoking it. EU High Representative/Vice-President Federica Mogherini believes many vessels flying European Union flags were threatened to make Brussels consider “appropriate targeted measures” to be taken as a signal to Moscow.
The increase in UK military presence goes against the letter and spirit of Minsk accords, which state that the conflict in Ukraine should be managed through diplomatic and political means.
The US military already runs a maritime operations center located within Ukraine’s Ochakov naval facility designed to deliver flexible maritime support throughout the full range of military operations. Hundreds of US and Canadian military instructors are training Ukrainian personnel at the Yavoriv firing range. The US is to transfer two Oliver Hazard Perry-type frigates to Ukraine. The move will actually ensure constant NATO naval presence in the Black Sea going around the restrictions imposed by the Montreux Convention because the vessels will have America sailors onboard carrying out “training missions” and remain under US command, despite official sources saying otherwise. All in all, ten ships of that class are available for export. In September, the US Coast Guard transferred two Island-class cutters, armed with .50-caliber machine guns and 25mm deck guns. The transfers urge Kiev to challenge Moscow militarily.
Nobody in Washington or London asks why an industrialized nation and a large arms exporter, with abundant resources and fertile land should depend on foreign assistance unable to defend itself. Weapons are supplied and training is provided to the country, where corruption is rampant. Even the US State Department’s recent report says it is.  Popular protests are commonplace. The conflict in Donbass is used to distract the people from domestic woes. The frustration with Kiev’s reluctance to introduce much-needed reforms and curtail the political influence of the oligarchs is rapidly growing. The common people of Ukraine need political and economic reforms, not increased foreign military presence on their soil.
The only reason for the West to keep the failed Ukraine afloat is its obsequiousness and readiness to be converted into a springboard to threaten Russia with an aggression. Despite Ukraine’s multiple problems, the country has recently been rewarded with an official status in NATO. The 2018 North Atlantic Alliance’s summit confirmed its support for Ukraine’s full-fledged membership to make a mockery of the so called “NATO standards.”
The UK government is going through hard times. It has just achieved as a draft agreement on post-Brexit relations with the EU. The deal has a little chance to make it through the Commons. Nobody knows exactly how it will end up if the MPs say no. There may be no Brexit at all finally. Chancellor Philip Hammond believes


“If the deal is not approved by parliament, we will have a politically chaotic situation… In that chaos that would ensue, there may be no Brexit.”

Or there may be endless negotiations, reconciliation conferences, delays and postponements. It’ll be a large order for the government to stay. There are supporters of no-confidence vote in parliament. You never know how it’s all going to pan out.
Nothing unites a divided nation better than an [alleged] external threat, such as Russia. The Brexit deadline is March 29 to launch a 21-months transition period with Britain still a member. The events in Ukraine are needed to fuel the fire. Making people think that the UK is lending a helping hand to a poor nation under attack is a way to improve the government’s image and approval ratings. The cabinet members never tell their people that by rendering military assistance to Kiev their country becomes an accomplice to a conflict that has nothing to do with its national security or interests. The UK military aid eggs the Ukrainian government on to seek a military solution.
Russia is not watching idle. If the Minsk accords are washed out, it will have each and every reason to recognize the Lugansk and Donetsk self-proclaimed republics as independent states eligible for military cooperation agreements, including stationing Russian military bases on their soil, if their governments ask for it. No international law would be violated.
Ukraine’s government is ramping up tensions because President Petro Poroshenko is running for re-election in March 2019 on a national security platform. So he takes a tougher line on Azov. Those who rush to provide him with military assistance become accomplices in his adventurist actions that could have disastrous consequences. The UK will bear responsibility for goading Kiev into taking a confrontational approach and turning the Azov Sea into a flashpoint that can spark at any minute.
*

Note to readers: please click the share buttons above. Forward this article to your email lists. Crosspost on your blog site, internet forums. etc.
Arkady Savitsky is a military analyst based in St Petersburg, Russia.
Featured image is from SCF
The original source of this article is Strategic Culture Foundation
Copyright © Arkady Savitsky, Strategic Culture Foundation, 2018
Comment on Global Research Articles on our Facebook page
Become a Member of Global Research

Posted by Baldwin Templeton at 5:30 AM