By Kai Weiss
Mises.org
Elections are just around the corner in Bavaria, Germany’s largest and economically strongest state. On October 14, Bavarians will go to the polls to elect a new state government. One thing that is
already sure is that the Left Party, Germany’s mainstream socialist party, will not have much success. It is currently polling around 3 to 4 percent, far away from the usual 10 percent it has countrywide and below the threshold of 5 percent to have seats in the Bavarian parliament.
Seemingly this has led to some desperation in the ranks of the party. Socialism and Christianity have always had a rough going with one another, to say it mildly. All the more surprised I was when I spotted the following billboard of the Left Party recently in my hometown Regensburg (which is in Bavaria): 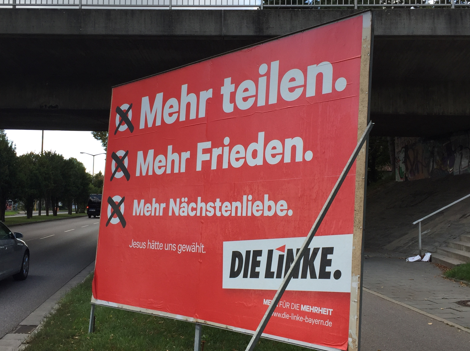 “More sharing.
More peace.
More brotherly love.
Jesus would have voted for us.”
As a practicing Catholic, this left me in slight bewilderment to say the least. Of course, these assertions are mere political opportunism. Bavaria is one of the most conservative and religious states in Germany. It is also a Catholic stronghold — 58.6 percent of Bavarians are Catholic. Bavarians don’t like extremism: in contrast to many other places in Germany, they are as much anti-communist as anti-fascist. The usual reaction of Bavarians when they see a Nazi or socialist would be disgust coupled with thinking that this guy should get off his high horse quickly (this reaction holds true for most other extremes — including libertarianism, as I have been happy to find out over the years). This is the reason why the Left, generally much disliked in Bavaria, is attempting to suddenly be religious.
But what is the track record of socialists, and more so, the Left Party, on religion? Of course, Karl Marx himself once noted that “religion is the opium of the people” — which is bad, since in their view communism should be the opium — should be what people believe in — not some mystic church from the Dark Ages. 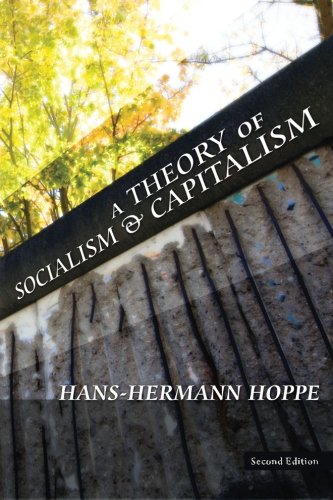 Thus, the conflict between socialism and the church began quickly — a conflict which is continuing to this day when we look to China. It was a dominant factor in communist regimes of the twentieth century, where the despots tried to subordinate the church and eliminate religion once and for all. But again and again, Christianity stood tall. Indeed, it spurred the “revolution of conscience” in Eastern Europe, especially in Poland, where Pope John Paul II played an instrumental part in the fall of the Soviet Union.
Similar things happened in East Germany — or offiically the German Democratic Republic (GDR), which was long barred from the virtues of Western liberal values — and barred they literally were with a wall surrounding them.
This is especially interesting considering Germany’s Left Party is the direct successor of the Socialist Unity Party of Germany (SED) which held East Germany in an iron grip for many decades. And yes, strangely enough, religion was suppressed there as well. In 1950, before communism truly took hold in the country, 95 percent of eastern Germans were religious. In 1989, when the Berlin Wall fell, it was only 30 percent. Today, what was once East Germany is still considered the “most godless place on the planet,” with more than half of the people saying they don’t believe a God exists.
It was the result of decades of attempts to suppress religion by the SED — again, the direct forerunner of the Left Party. This communist regime actively propagated a materialist and atheist world view, instituted“Communist rites” as a substitute to mass, and tried in many way to suppress Christianity, especially in the early stages of the GDR.

Starting in the late 1970s, the peaceful rebellion of the church increasingly gained steam. It organized peace movements, for instance the “Swords into Plowshares.” It welcomed people who wanted to live a different life than the SED chose for them — from punks, who were allowed to do concerts in church buildings, to helping those who tried to flee the country. It went so far that in 1988, Erich Hoenecker, the general secretary, i.e., the head of state, called the actions of the church “counterrevolutionary.” From rounds of prayers in the St. Nikolai Church in Leipzig, the peaceful revolution, with the famous “Monday Revolutions,” sprang forth, which ultimately led to the end of the regime.
There are many arguments to be made that Jesus was neither a socialist nor would have ever voted for them — and they have been made better than I ever could. Of course, socialism doesn’t lead to “more sharing” — it leads to more taking forcefully from one to give it to others. It doesn’t lead to “more peace” — it leads to destruction and death. And it doesn’t lead to “more brotherly love” — it leads to distrust among one another. All the more, not even the Left’s official campaign slogan “more for the majority” holds true — after all, it leads to less for everyone except a tiny elite.
The assertion, however, that Jesus would have voted for all of this, for the party which suppressed Christianity for decades, the party which the church fought against for decades and ultimately peacefully put out of power, and the party which normally never talks about anything religious approvingly (as long as elections are not in a religious state), is nothing but abominable. In a sense, however, it should leave us feeling good: it shows that Germany’s socialists have to be very desperate right now.
Kai Weiss is an International Relations student and works for the Austrian Economics Center and the Hayek Institute. He is a Mises University alumnus.