By Ron Unz
The Unz Review

General Patton U.S. commemorative stamp, issued in 1953. Credit: Wikimedia Commons.
During the long Cold War many Russians grew sufficiently disenchanted with the lies and omissions of their own news outlets that they turned to Western radio for a glimpse of the truth.

The growth of the Internet has now provided Americans with a similar opportunity to click on a foreign website and discover the important stories that have somehow escaped the attention of their own leading journalists. Ironically, much of such “alternative media” coverage actually appears in the leading British newspapers, eminently respectable and published in our closest historic ally.
For example, three or four years ago I noticed a link on a prominent libertarian website suggesting that George S. Patton, one of America’s most renowned World War II military commanders, had been murdered by order of the U.S. government. Not being someone much drawn to conspiracy-mongering, the lurid claim seemed totally outlandish, but I decided to click my mouse and harmlessly examine a bit of Internet fringe-lunacy. However, the source turned out to be a lengthy article in Britain’s Sunday Telegraph, one of the world’s leading newspapers, describing a newly published book based on a decade of detailed research and interviews undertaken by an experienced American military affairs writer.
The book and the article had appeared in 2008 and I had never heard a word about the story in any of my major American newspapers. The description seemed sufficiently factual and detailed that I consulted a couple of prominent academics I know, with backgrounds in history and political science. They had also never encountered the theory, being just as surprised as I was by the material and by the fact that such remarkable revelations had never received any attention in our own country, home of the freest and most scandal-mongering media in the world.
With curiosity getting the better of me, I ordered the book for about $8 from Amazon.com. 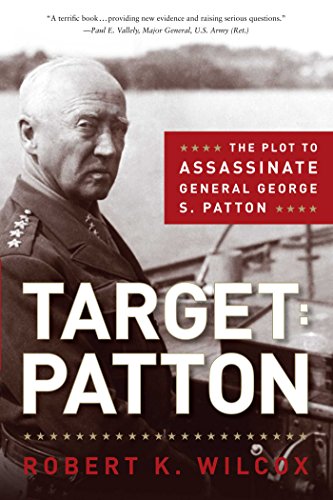 Most notable was Bill O’Reilly, the FoxNews pundit, who published Killing Patton in 2014, another in his series of popular history best-sellers co-authored by Martin Dugard. The very title itself challenged the official story of an accidental car crash, and I eagerly opened the book, only to be severely disappointed. The presentation seemed thin and padded, with perhaps 10% of the text merely rehashing the analysis provided by Wilcox while the remaining 90% represented a rather conventional historical summary of the Western Front near the end of the Second World War, including heavy coverage of the Nazi concentration camps, and with little of this material having any connection to Patton. The only interesting part of the text seemed based on Wilcox’s original research, and that relationship was heavily disguised by the total absence of any footnotes, with the only indication being a single short sentence near the end citing the Wilcox book as a very helpful summary of “the conspiracy theories.” Not unreasonably, the latter author seemed somewhat irritated at the lack of appropriate notice or credit he received.
O’Reilly’s dumbed-down book sold over a million copies, with a title proclaiming Patton’s assassination. But the resulting media coverage was still rather scanty and largely negative, criticizing the supposed indulgence of “conspiracy theories.” Media Matters summarized the reaction as “Historians Rip O’Reilly’s New Patton Book,” and given the near-total lack of any documentation provided by O’Reilly, much of that criticism may not have been unreasonable. Thus, the media totally ignored a heavily documented and persuasive book, while attacking and ridiculing a weak one on the same subject, with this dual approach constituting an effective means of obscuring the truth.
America’s opinion leaders tend to rely upon our most elite national newspapers for their knowledge of the world, and the only coverage I found in these of O’Reilly’s best-seller was a rather odd opinion piece by Washington Post columnist Richard Cohen. Cohen seemed rather uninterested in the assassination question one way or another, but harshly condemned O’Reilly for devoting insufficient pages to discussing Patton’s alleged anti-Semitism. Indeed, he almost implied that some of the remarks later found in Patton’s private diaries were sufficiently nasty toward Jews that perhaps no American should even care whether our highest ranking general in Europe had been killed by his own government or anyone else. The mentality of our mainstream media these days is very strange indeed, and we live in the world it creates for us.
Most recently, the success of the O’Reilly book and our revived Cold War with Russia may have led to production of a new documentary making the case for Patton’s assassination, but possibly reconstructing the facts with a distorted twist. Wilcox’s original research had demonstrated that top American leaders organized Patton’s assassination, though probably in conjunction with the Soviets. O’Reilly provided some of those facts in his book, but his media interviews airbrushed out the American role, simply declaring that “Stalin killed Patton.” And based on news reports, I wonder if this new documentary, apparently made without Wilcox’s involvement, will similarly ignore the massive evidence of direct U.S. government involvement, while perhaps attempting to fix the blame solely upon the nefarious Russians.
&lt;span data-mce-type="bookmark" style="display: inline-block; width: 0px; overflow: hidden; line-height: 0;" class="mce_SELRES_start"&gt;﻿&lt;/span&gt;
Finally, this important historical incident provides a useful means of evaluating the credibility of certain widely-used resources. For years I’ve emphasized to people that Wikipedia is absolutely worthless as a source of reliable information on any relatively “controversial” topic. Given Patton’s enormous historical stature, it is hardly surprising that his Wikipedia entry is exceptionally long and detailed, running over 15,000 words, with nearly 300 references and footnotes. But this exhaustive exposition contains not the slightest suggestion of any suspicious aspects to his death. “Wiki-Pravda” indeed.
Reprinted with permission from The Unz Review.

The Best of Ron Unz
Ron Unz, publisher of The American Conservative, served as chairman of English for the Children, the nationwide campaign to dismantle bilingual education. He is also the founder of RonUnz.org
Copyright © 2018 The Unz Review
Previous article by Ron Unz: When ‘Tokyo Rose’ Ran for President
Posted by Baldwin Templeton at 5:13 AM