In an astonishing exhibition of chutzpah, fake Sandy Hook parent imposters are seeking protection from exposure on the fantastic ground they are being subjected to harassment and bullying, which, under the circumstances, is completely absurd. The Sandy Hook hoax made them rich beyond belief, splitting between $28-130,000,000 in donations from sympathetic but gullible Americans who mistakenly believed that they had lost children--a myth massively propagated by the mainstream media. 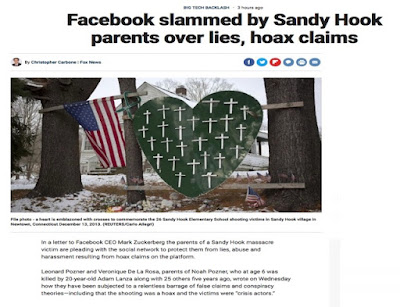 Their appeals to Facebook have nothing to do with harassment or bullying but a desperate attempt to ward off their exposure through the social media. The mainstream has already been co-opted by the Deep State, which has been sponsoring fake school shootings in a determined effort to constrict and eventually abolish American's right to keep and bear arms under the 2nd Amendment--where a nation with 100,000,000 armed citizens cannot be dominated by the forces of tyranny. Check it out here:


Thirteen experts on Sandy Hook, including six (current or retired) Ph.D. professors, proved that the school had been closed by 2008 and that there were no students there in Nobody Died at Sandy Hook (2015), which amazon.com promptly banned. So I released it for free as a pdf: you can download to your own desktop here. Since the book appeared, we have been able to figure out how they faked the kids using photographs of older kids when they were younger,  about which I have published widely.

Outrageously, they continue to promote "Noah Pozner" as a victim of the Sandy Hook shooting, even though we have discovered that "Noah", like other Sandy Hook kids, was a fiction made up out of photos of older kids when they were younger. (Mona Alexis Pressley has discovered that other of them appear to have been made up out of photos of the parents themselves as children.) This discovery was inspired by Kelley Watt's observation that "Noah" strongly resembled Michael Vabner:


We found that they had the same eyes, the same eyebrows, the same shape of their skulls and (even) the same ears. When we had combined our collaborative research, we were able to demonstrate that "Noah" had indeed been made up out of photographs of Michael Vabner, who had been identified as his older step-brother. I enlisted the assistance of Larry Rivera, who had done brilliant work proving that "the man in the doorway" of the Texas School Book Depository was in fact Lee Harvey Oswald:


It was therefore inevitable that Michael, being considerably older, would be going to college and attempting to make his own way in the world. About to graduate from the University of Connecticut at Storrs, Michael created his own web page with a resume to assist in his pursuit of a position suitable to his talents, where he majored in economics with courses in web design and information technology, which Tony Mead was the first to identify:


They took an abandoned school and used it as the stage to conduct a two-day FEMA drill, where we even have the manual (included as Appendix A in the book you can download for free). There was a rehearsal on the 13th, going LIVE on the 14th, which explains the portable sign, "EVERYONE MUST CHECK IN", the Porta-Potties already in place, pizza and bottled water at the Firehouse and so many wearing name-tags on lanyards. These are all standard procedures for FEMA exercises, which we document in the book.


For those who remain skeptical in the face of such a monstrous deception perpetrated by Barack Obama, Joe Biden, Eric Holder, Governor Daniel Malloy, the Connecticut State Police, the Newtown School Board and other (no doubt, passionate) gun-control advocates, look at the extensive proof we have that the school--loaded with asbestos and other bio-hazards and severely damaged by hurricanes and a huge flood the occurred in 2007--had been closed by 2008 and there were no students there: take a look at this thorough and detailed expose:


You may think of this as a primer on how to make obscene amounts of money by staging faux acts of terrorism to instill fear into the heart of every parent in the United States. The 26 fake families spilt the donations and pocketed at least $1,000,000 apiece. The Newtown School Board was given a grant of $50,000,000 for a new K-4 elementary school, even though the average cost across country is ony $7,000,000. And with the help of their friends in the media, including Facebook, they may continue to profit from their criminal acts of fraud and of theft by deception. After all, that's the American way!

Jim Fetzer, a former Marine Corps officer, is McKnight Professor Emeritus on the Duluth Campus of the University of Minnesota and, with Mike Paleced, co-founded of moonrockbooks.com.