If U.S. Television Showed the ‘Killing Gaza’ Documentary, Support for Israel Would Start to Shrink By James North Global Research,

Killing Gaza from Dan Cohen on Vimeo.
If U.S. Television Showed the ‘Killing Gaza’ Documentary, Support for Israel Would Start to Shrink

If documentary films like “Killing Gaza” appeared regularly on American television, public opinion would start turning against Israel overnight. The film, just released by Dan Cohen and Max Blumenthal, is inspiring and sickening.


It is being screened at special showings, but has not yet been released to theaters.
Fortunately, you can download it here. (click image below) 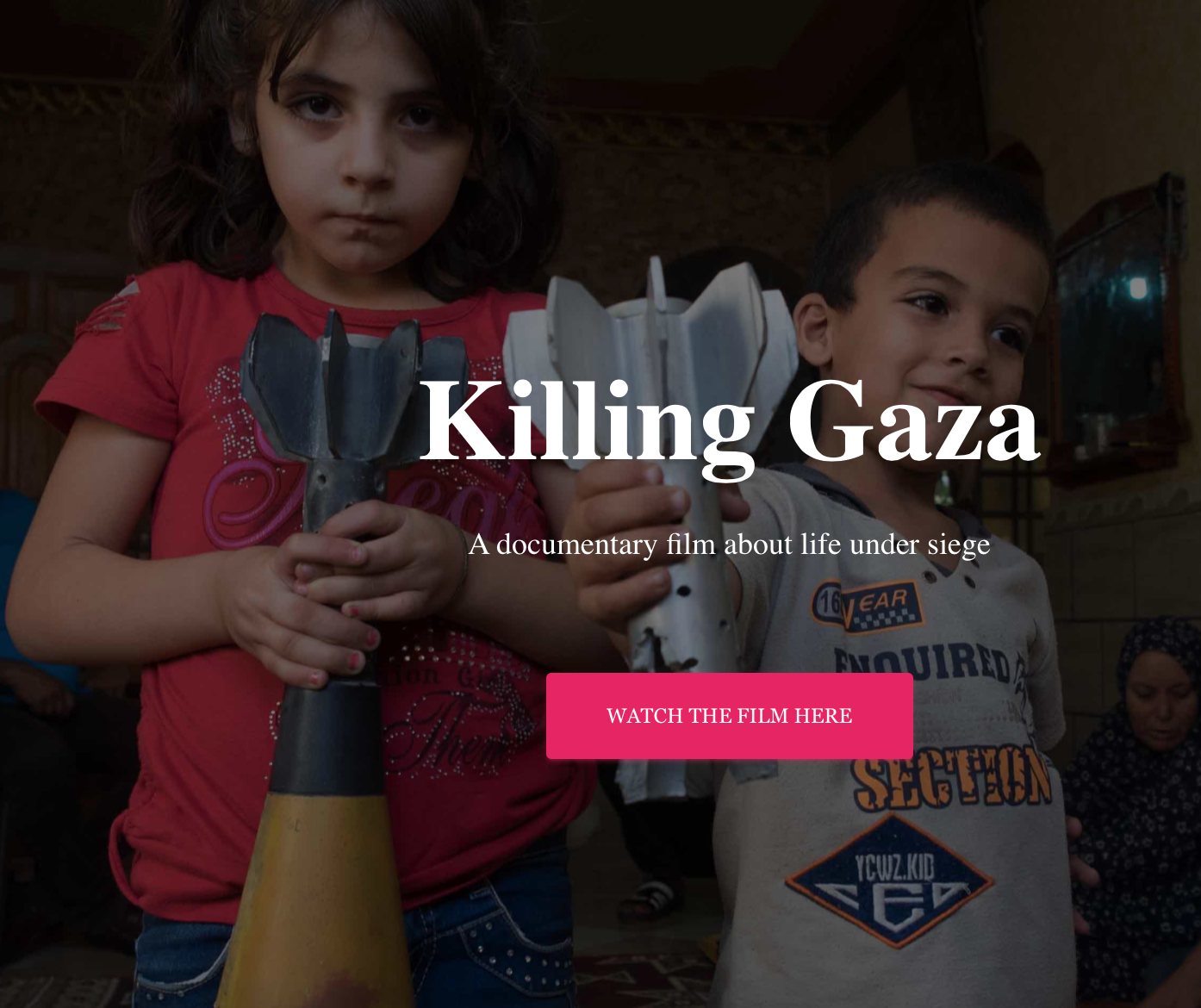 Cohen and Blumenthal arrived in Gaza on August 15, 2014, during a brief ceasefire in Israel’s savage air and land assault on the besieged territory. Visitors to this site will recall Cohen’s powerful posts and photographs at the time, and in 2015 Blumenthal published an indispensable book,The 51 Day War: Ruin and Resistance in Gaza.
Killing Gaza
“Killing Gaza” is a strong addition to their previous work. In the background are scenes of mass destruction, like a Mediterranean version of Berlin in 1945. But the heart of the film are interviews with more than 30 individual Gazans, shown in all their humanity, who are given a chance to speak for themselves in ways that you will never encounter in the U.S. mainstream. The two reporters ranged across the open air prison territory, listening to witnesses and survivors at a half dozen different locations. Then Cohen was able to return several times over a two-year period, following up with the subjects, until Israel stopped him from coming.
Some of the most excruciating footage is from early in the film. Joe Catron, the longtime American activist in Gaza, was an eyewitness, and he narrates how a group of human rights workers tried to use an Israeli ceasefire to look for survivors in the rubble of the Shujaiya neighborhood, east of Gaza City. Israeli snipers broke the ceasefire, and you can actually watch as they murder 23-year-old Salem Shamaly, right in front of rescuers. Shamaly is wounded; he cries out for help; but it’s far too dangerous to risk more deaths. His body stayed out in the hot sun for 7 days before it was safe to recover him. You then see his family members, who are nearly speechless with pain over his murder. At the end of the film, you are not surprised to learn that Shamaly’s little brother, Wassin, who looks like he’s 12 years old, promises to avenge his death.
Watch the trailer below.
Killing Gaza from Dan Cohen on Vimeo.

Cohen and Blumenthal also filmed witnesses in Khuza’a, in southeastern Gaza. Hani Najjar show them the interior of his house, in which Israeli troops murdered 6 people, some (apparently) with knives. And you hear how Israeli soldiers cornered a 98-year-old man who was too frail to flee.

“They started cheering like they had caught their prey,” he says, and then he demonstrates how the soldiers beat him.

The apologists for Israel who claim that film of human rights abuses is manufactured in “Pallywood” studios should be forced to sit through this sequence.
The two filmmakers were themselves eyewitnesses to Israel’s final aerial bombardment of the 2014 attack, on Gaza City. They report that the multi-story buildings we see being obliterated “by American-made bunker buster bombs” are middle-class housing developments, not military targets by any stretch of the imagination. A young man stands in front of the rubble of his former apartment home and says:

“There are many baffling things, like the world’s silence. Even the human rights groups are turning a blind eye. They call for animal rights, but there are no human rights.”

“Killing Gaza” is long — 1 hour, 37 minutes — because it has to be; it includes footage we will see nowhere else. When it ends, you wonder how anyone in Israel or among its supporters elsewhere could ever expect that the people of Gaza will stop fighting for their human rights.
The original source of this article is Mondoweiss
Copyright © James North, Mondoweiss, 2018
Comment on Global Research Articles on our Facebook page
Become a Member of Global Research
Posted by Baldwin Templeton at 5:06 AM