“Peace Negotiator” Mike Pompeo: There is a CIA Plot to Assassinate Kim Jong-un?

In May of last year, the DPRK accused both the CIA (headed by Mike Pompeo) and the ROK’s National Intelligence Service (NIS) of “a failed plot to assassinate its leader Kim Jong-un with a biochemical bomb at a military parade in Pyongyang.”


Neither the CIA nor the White House responded to these accusations.
While press reports acknowledged the CIA’s “long history” of political assassinations, the DPRK’s accusations were casually dismissed.
According to The Guardian (March 5, 2017)

Guardian screenshot, March 5, 2017
.
Mike Pompeo’s Unannounced May 1, 2017 Mission to Seoul
What the Western media failed to notice was that the alleged assassination attempt  directed against Chairman Kim (May 5, 2017)  took place 5-6 days AFTER Mike Pompeo’s arrival in Seoul on the weekend of April 29-30 for (unannounced) consultations with his intelligence counterparts on May 1. Is it relevant? The matter needs to be carefully investigated.
Also of significance,  the alleged failed assassination plot took place four days BEFORE the May 9 Elections which led to President Moon’s Inauguration on March 10, 2017:
April 29-30 Arrival of Mike Pompeo in Seoul, with his wife
May 1 Seoul: Pompeo Consultations with intelligence and military counterparts, US military and US Embassy
May 5, Pyongyang: Alleged failed assassination directed against Kim Jong-un
May 9, National elections
May 10, Inauguration of President Moon Jae-in
The timing of Pompeo’s meetings in Seoul was crucial: in early May 2017, the intelligence team at the ROK National Intelligence Service (alias KCIA) headed by Langley’s crony Lee Byung-ho, was STILL under the control of the appointees of impeached president Park Geun-hye (daughter of the late dictator Park Chung-hee assassinated in 1979).
South Korean media confirmed that Pompeo had behind closed doors meetings with NIS spy chief Lee Byung-ho as well as “high-level officials in the presidential office” which was under the helm of Park crony and acting president Hwang Kyo-ahn (who held the positions of Justice Minister and Prime Minister in the government of impeached president Park).
The NIS team during Mrs. Park’s presidency (appointed by her predecessor) had been actively involved in an illicit propaganda scam to influence the vote in the 2012 elections which led to Mrs Park’s victory. Following her impeachment and the election of President Moon, legal procedures were implemented directed against:

“Lee Byung-ho [who met Mike Pompeo on May 1, 2017] and two other NIS chiefs during the Park government suspected of having provided billions of won from the spy agency’s special activities budget to the top office. The NIS is exempted from having to disclose where the funds, allocated for classified security operations, are used.” (KBS World Radio, November 10, 2017)
. 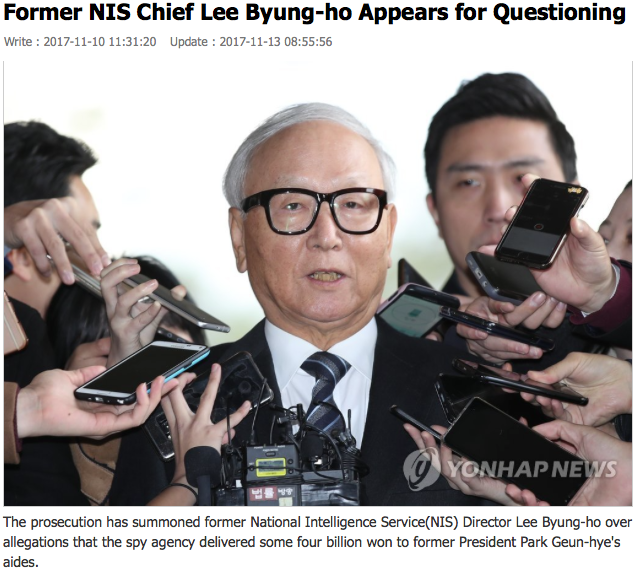 Screenshot of Lee Byun-ho who met Pompeo behind closed doors on May 1, 2017, Source KBS World Radio
.
Following Moon’s accession to the presidency on May 10 2017, a new head of the ROK National Intelligence Service (NIS) Suh Hoon was duly appointed. While a major shuffle was undertaken within the spy agency, Suh Hoon’s appointment had nonetheless been (formally) approved by Langley. The important question: has the CIA lost control of its historical clutch over the ROK’s  National Intelligence Service (NIS)?
Video: On a Korean Peace Plan, The Role of the CIA in Setting An Agenda for the Kim-Trump Summit
Mike Pompeo’s Grotesque Insinuation
In a bitter irony, a few months later in October 2017 (see SCMP report)  CIA Director Mike Pompeo (now Secretary of State) jokingly denied and acknowledged (without referring to the May 5, 2017 alleged assassination attempt during a military parade in Pyonyang) that there is a  plot to assassinate Chairman Kim, which is part of the CIA’s longstanding history of political assassinations. .

“If Kim Jong-un suddenly dies, don’t ask me about it, says CIA chief”
“With respect, if Kim Jong-un should vanish, given the history of the CIA, I’m just not going to talk about it,” the CIA director said on Thursday, when asked what would happen if Kim suddenly died.

We are going to become a much more vicious agency
… “The president’s made it very clear. He’s prepared to ensure that Kim Jong-un doesn’t have the capacity to hold America at risk. By military force if necessary.” 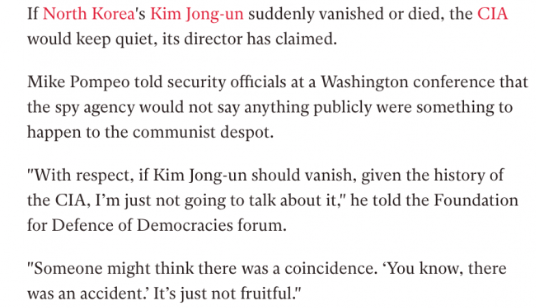 .
In a bitter irony, the same Mike Pompeo who casually refers to the “CIA history” of political assassinations, has come to play a central role in the “peace” negotiations with Pyongyang.
The ROK’s NIS Chief Suh Hoon together with Moon’s  National Security Advisor Chung Eui-yong were put in charge of a process of trilateral negotiation: DPRK-ROK-US, with ROK officials operating as a go-between. On March 6, Chung Eui-yong, together with four other senior ROK officials including Suh Hoon, met up with the DPRK leadership in Pyongyang.
This meeting on March 6, 2018 had set the stage for the former CIA director’s followup “secret meeting in Pyongyang”: Mike Pompeo who had intimated that political assassination of Chairman Kim was on the CIA’s drawing board travelled to Pyongyang over the Easter holiday for talks with the DPRK leadership with a view to negotiating the terms of the Singapore Summit which had been set for June 12.
North Korean leaders were fully aware of Pompeo’s real intent. They nonetheless played the game.
Peace was never on the US agenda. And this was true prior to the appointment of John Bolton as National Security Adviser. The objective is to shunt the inter-Korean dialogue and impose a unilateral process of “denuclearization”.
The Kim-Moon dialogue is viewed by Washington as a potential obstacle. Acknowledged by Pompeo, there is a CIA Plot to assassinate Kim Jong-un. Is it Pompeo’s Plan B?
In recent developments, following the Moon-Kim May 26 meeting on the North Korean side of the Panmunjom truce village of the DMZ,  President Moon said that he was “perplexed” by Trump’s decision to cancel the Singapore summit and urged Washington and Pyongyang to resolve their differences through “more direct and closer dialogue”.
The original source of this article is Global Research
Copyright © Prof Michel Chossudovsky, Global Research, 2018
Comment on Global Research Articles on our Facebook page
Become a Member of Global Research

Posted by Baldwin Templeton at 2:44 AM