[Editor's note: This blog was deleted--no doubt, in my opinion, by the man who calls himself "Lenny Pozner"--for calling The Times to account for the absurdity of its fake news coverage. I will republish it as often as necessary to cope with the Deep State.]

In the latest absurdity publish by The New York Times, which pretends to be "our nation's newspaper of record" but which has a record of publishing false accounts of every major "false flag" carried out by local, state and federal authorities--most recently, about Charlottesville, where The Times celebrated a Charolttesville Stunt Man, a Photoshopped Photo and a Crisis Actor (who made her debut in Sandy Hook), we now have the further--and to my mind, conclusive--demonstration that The Times has gone "all in" on behalf of "fake news" in its own "Post-Truth Era": 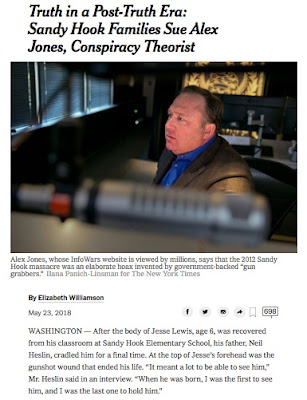 ​
The profundity of the willful ignorance of The Times and its designated hitwoman, Elizabeth Williamson, can be measured by the facts of the matter with regard to their reporting and completely failure--which has to be deliberate--to contact the 13 most highly qualified experts on Sandy Hook, who have contributed to the book, NOBODY DIED AT SANDY HOOK (2nd edition, 2016), including 6 (current or retired) Ph.D. college professors, among them James Tracy, Ph.D., Vivian Lee, Ph.D., Dr. Eowny, Ph.D., Nick Kollerstrom, Ph.D. and Sterling Harwood, J.D., Ph.D., and myself, McKnight Professor Emeritus on the Duluth Campus of the University of Minnesota, who brought these experts together for this purpose: 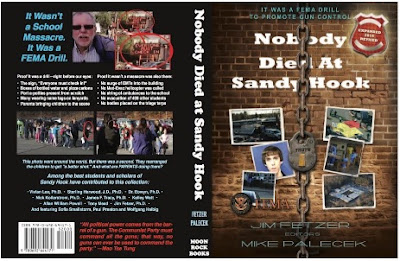 Can The TImes possibly be unaware that the first edition was banned by amazon.com within a month of its publication on 22 October 2015 after it had already sold nearly 500 copies and appeared destined to be "a best seller"? It had to be suppressed because it proves that the school was closed by 2008 and that there were no students there. We even found the FEMA manual for a two-day exercise, which explains why there were Port-a-Potties in place, pizza and bottled water was available at the Firehouse and so many were photographed wearing name tags on lanyards--all of which is standard for FEMA exercises, where the manual was published as Appendix A! Even Infowars.com covered the ban: 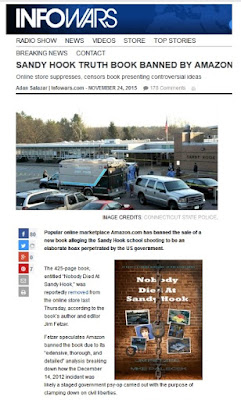 It was taken down 38 minutes later after having received 178 comments because it accurately gave photo IMAGE CREDIT: CONNECTICUT STATE POLICE. which was accurate because the Connecticut State Police were staging the event behind the scene, including furnishing an empty home to serve as the Lanza residence and refurbishing the school to serve as the stage. When amazon.com banned the book, I immediately released it to the public for free as a pdf, where anyone can download their own copy of the 1st edition (2015) for free. And I have made many videos and presentations on Sandy Hook in the years since, where YouTube has been doing its best to take them down, which Mike Adams has discussed in his recent study, "'The Most Dangerous Mind in America' interviewed about 'false flags' and extreme censorship". And if further proof were needed that The Times is blatantly lying to the American people, here's a blog I publish on 18 April 2018:
_______________

Posted by Baldwin Templeton at 5:13 AM