By Louis Leo IV and James Fetzer
Attorney Louis Leo IV discusses James Tracy’s pending civil rights lawsuit against Florida Atlantic University with University of Minnesota Professor James Fetzer on GCN’s The Power Hour, Monday,  April 23, 2018. Leo is the lead attorney representing Tracy in the federal civil rights lawsuit against the South Florida-based public university.
The two examine Tracy’s unlawful firing by Florida Atlantic University, the corrupt and fraudulent trial defense conducted by FAU’s corporate attorneys (who received significant aid from the US District Court for the Southern District of Florida), and the implications for public employees’ right of free speech and association in the wake of the decision. Leo and Fetzer also discuss the circumstances that led to Tracy’s termination by FAU officials, which followed a smear campaign by cyber trolls and major news media seeking to defend the Sandy Hook event’s official narrative.
One day after the interview was recorded, on April 24, US District Judge Robin L. Rosenberg issued a 31-page final order denying all post-trial motions, defending her October 31, 2017 summary judgement rulings in favor of FAU, and asserting that Plaintiff Tracy was provided with a fair trial in her courtroom. With the decisions the case now proceeds to the US 11th Circuit Court of Appeals.
For additional information on case and how you can assist in the process, please visit the James Tracy Legal Defense Fund.
Audio Player

James H. Fetzer: My guest for the second hour has distinguished himself by representing James Tracy, who is an Associate Professor of Communications and the Media at Florida Atlantic, who is seeking to protect the American people from an elaborate scam by investigating the aspects of Sandy Hook, in particular, Lenny Pozner’s claim to have a son, Noah, who died there.

James was a skeptic at the time, but he was exercising his diligence and responsibility on behalf of the public to ensure they weren’t take in by a scam which wound up looting the American people of somewhere between $27 and $130 million in donations in the false belief that there’d actually been a shooting massacre, and that these 20 children and six adults had died. Divided by the 26 families that were impersonating the survivors, they split and derived over a million bucks apiece.

I believe this is one of the reasons Lenny Pozner has been so ruthless in going after those of us that have been seeking to expose the truth. James Tracy turned out to be targeted, where Lenny published several articles in the South Florida newspapers, including the Jewish journal, Forward, the Sun-Sentinel and others. Tracy ended up losing his position over this.

The university had a flimsy excuse, but none better to address the issues here than Louis Leo IV, who represented him. Louis has a website,
peopleoverpolitics.org, and he has authored a brilliant overview of Tracy versus Florida Atlantic, titled, “Legalizing Pretext: How an American Public University Conspired to Beat the First Amendment.” Louis welcome to The Power Hour.

Louis Leo IV: Thanks for having me.

Fetzer: I’m just delighted. Perhaps you’d like to begin with a thumbnail overview of what happened here, and how this American university beat the First Amendment.


Leo: Well, I can tell you there are a lot of moving parts in this case, but we’re still waiting for the court to rule on post-trial motions, which include a Motion for Judgement as a Matter of Law, as well as a motion for a new trial. And, we’re still trying to figure out exactly what happened. I guess you can say it’s been a long and disturbing ride through the legal system in this case.

Fetzer: I was just going to add that I too am a colleague, a collaborator, with James Tracy, and I was the head of his legal defense fund, and I believe in this man one-hundred-percent. In fact, I can’t imagine a less likely target for an action like this than James Tracy. He is so principled. He is so measured. He is so thoughtful. He is so intelligent. And he was actually undertaking at act of what’s technically known as super arrogation—going beyond the call of duty in an effort to determine the facts of the matter, and protect the American public from fraud.
Leo: Exactly.
Fetzer: They wound up being subjected to a theft by deception, by misrepresenting what had happened there. Lenny Pozner, Neil Heslin and others have defrauded the American people of a vast sum, and have gone on this stupefying campaign for gun control that’s completely one-hundred-percent the opposite of the interests of the American people. Louis, go right ahead.
Leo: I should start by saying that the reason Dr. Tracy lost in this trial is because of deception and fraud in the court, and it’s something that the court sanctioned, using the rules of evidence. This is outlined in our motion that the court made the grave error in excluding from trial evidence that showed just how blatant and pretextual the use of this policy was to terminate a tenured professorship.
The court literally excluded the [recorded statements of the] vice provost who fired Dr. Tracy for purportedly not complying with the school policy, on record saying that the policy and the forms that Dr. Tracy was fired for not turning in on time required clarity. This was during a heated senate faculty meeting that had a great impact on Dr. Tracy and all the other faculty who were present at this meeting, where the administration of this public university could not answer a straight question about this policy. This is because nobody understood this policy. In fact, the president of the faculty senate is on record at this meeting saying he doesn’t understand the policy, and is hoping to get some clarity on the policy. A few months later, of course, Dr. Tracy is fired for noncompliance.

The court also excluded cease and desist letters that were sent from constitutional rights groups, including the Foundation for Individual Rights in Education, which is what stopped FAU from firing Professor Tracy in 2013. The court not only excluded those letters, but would not even let Dr. Tracy talk about the letters, and how it impacted him, and how it affected his state of mind.
It’s the same thing with this faculty senate meeting that had a profound impact on Dr. Tracy. So ultimately, FAU was allowed to say whatever they wanted at this trial, and put on testimony about what the union in this case thought about him not turning in these forms, but was able to get out of evidence what administrators thought about the policy, and what they said on record, in recorded statements.
Fetzer: Just for the benefit of the audience, the university used as a pretext for firing Professor Tracy that he had not submitted forms for his outside activities on time. The outside activities included his blog—his own personal blog, where he was talking about Sandy Hook, where he published one of the most important original pieces dissecting the press conference held by Wayne Carver, the medical examiner, that didn’t add up in so many different ways. Which I regard as the first scholarly article about Sandy Hook. They used that as a pretext, when in fact the real issue was the content of the blog—that he was exposing that it was a hoax, and that Lenny Pozner was then attacking him in the media to warp the environment. It would turn out, I think, of having the effect of poisoning a potential jury pool. But the fact is-
Leo: But they weren’t just attacking him in the media. The records show that they were actually contacting the administrators at FAU, using proxies and third parties. Many of these people probably don’t even exist. [They were] sending letters to the administrators, telling them that Dr. Tracy’s harassing people. There’s even evidence showing that the top officials at the school are talking about this and circulating these messages with each other. They had nothing to say about it at trial, of course, But a lot of this stuff didn’t come in because it was deemed “hearsay.” So, it was very difficult to present the facts to the jury in this trial, because there’s a lot of evidence that didn’t come in, and I think given the [amount] of material evidence excluded, this should be grounds for a new trial.
We also have a Motion for Judgement as a Matter of Law, because before we ever got to trial, the court dismissed the bulk of the counts and constitutional claims against the university on Summary Judgement, which was just absurd. When you look at the evidence, it was overwhelmingly in favor of Dr. Tracy getting summary judgement on the issue of the policy being unconstitutional, and facially, meaning that it’s worded unconstitutionally, and as applied to him, and how they used it to fire him in retaliation for what he blogged about Sandy Hook. 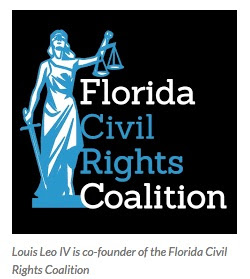 Fetzer: Yes. Just to mention in passing, I spent 35 years in higher education. I taught at Kentucky, Cincinnati, Virginia twice, University of North Carolina at Chapel Hill, New College and University of South Florida. I then finished my career on the Duluth campus of the University of Minnesota. I never heard anything like firing a tenured professor because he didn’t submit a form on time. I mean, that’s simply absurd. Just look at the disproportionate-
Leo: There was ample evidence at trial. Every single professor testified that they didn’t turn in the form. Nobody turns in the forms, if you really look at the evidence in this case,. Not even the administrators were turning in forms, and none of them got in trouble for it. When the administration had emails showing that these people are delinquent for not turning in forms, they didn’t get punished. But Dr. Tracy, he’s fired.
Every single professor testified that they didn’t turn in the form. Nobody turns in the forms.
Fetzer: You’re making so many excellent points and this is such a serious issue. Louis, you’re telling me not only was the university acting in a corrupt fashion, but the court doesn’t appear to have adhered to the rules of jurisprudence.
Leo: No, and they dismissed most of his claims before he ever got to trial. Instead of being a case where Dr. Tracy gets a trial with these individual [defendants] it’s just the university, and there’s only a few questions: Did they fire him for his speech? And, would they have fired him for any other reason? It’s kind of like asking, “Is the sky blue?” to a jury that’s just been shown a bunch of pictures with the sky green [laughts], fraudulently of course. Or using CGI.
Fetzer: Well, it’s really embarrassing. You’re really explaining how they manipulated the situation so that the real issues were never addressed.

Leo: Sure. Write a bunch of self-serving letters and disciplinary notices, and then go to trial and just lie and lie and lie. We impeached both the dean and the vice provost. Both of these administrators were changing their stories at trial and couldn’t answer simple questions that anybody in their shoes would know the answers to. Like the note—the question about the dean’s nasty notes, which are available on “Legalizing Pretext.” You know the one I’m talking about Dr. Fetzer?
Fetzer: Go ahead and elaborate for the audience.
Leo: Sure. These are notes that were discovered during the discovery process. The notes are written by the Dean who initiated discipline against Professor Tracy in both 2013 and in 2015. And she wrote during meetings with top officials, “JT [James Tracy] not going to stop publishing. Read his stuff. First Amendment. Find winning metaphors.” And I think that speaks for itself. 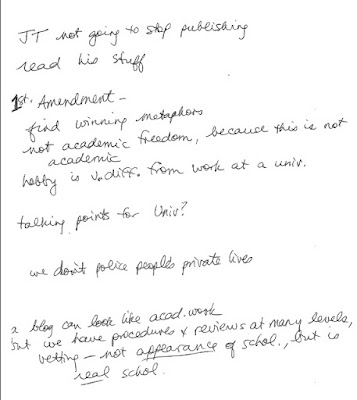 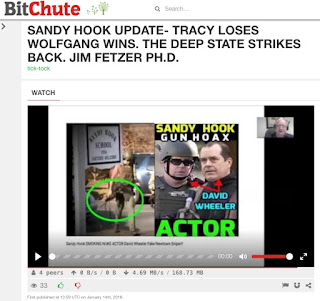 Posted by Jim Fetzer at 3:14 PM 2 comments
Posted by Baldwin Templeton at 5:05 AM