Mona Alexis Pressley
Conspiracy Realist
As in all stories, with it comes an official narrative. In the last, almost 17 years since 9/11, people have been trying to verify what they hear on mainstream media to validate its accuracy. There have been many journalists that have written articles about evidence found proving the official story is a lie. Going to http://jamesfetzer.blogspot.com/ many articles from various experts, journalists, and others, have a wealth of information needed to come to your own conclusions in regard to many false flags listed on the blog. At the Las Vegas shooting, there are two important facts that have been mentioned but not looked at very closely: the blood and bullet holes at the crime scene. After reviewing all the pictures that could be found on the internet, on the day of, or a day or so after, it became obvious that in all of the pictures a lack of blood or bullet holes were found at the entire concert site. With only one picture of a victim with a little blood going in the wrong direction on her leg and the only bullet hole was across the street at the airport, it was apparent that no such crime happened at the concert.
It was reported that approximately 600 people were shot at the concert. The Las Vegas Metropolitan Police Department reported the bullets used were a hollow point and polymer tipped hollow point ammunition. Now with 600 people shot, there should be blood everywhere, as the "witnesses" described in news reports. Looking at all these pics through a magnifier there was no blood. There should be blood on all of the concertgoers items left behind and on the floor. 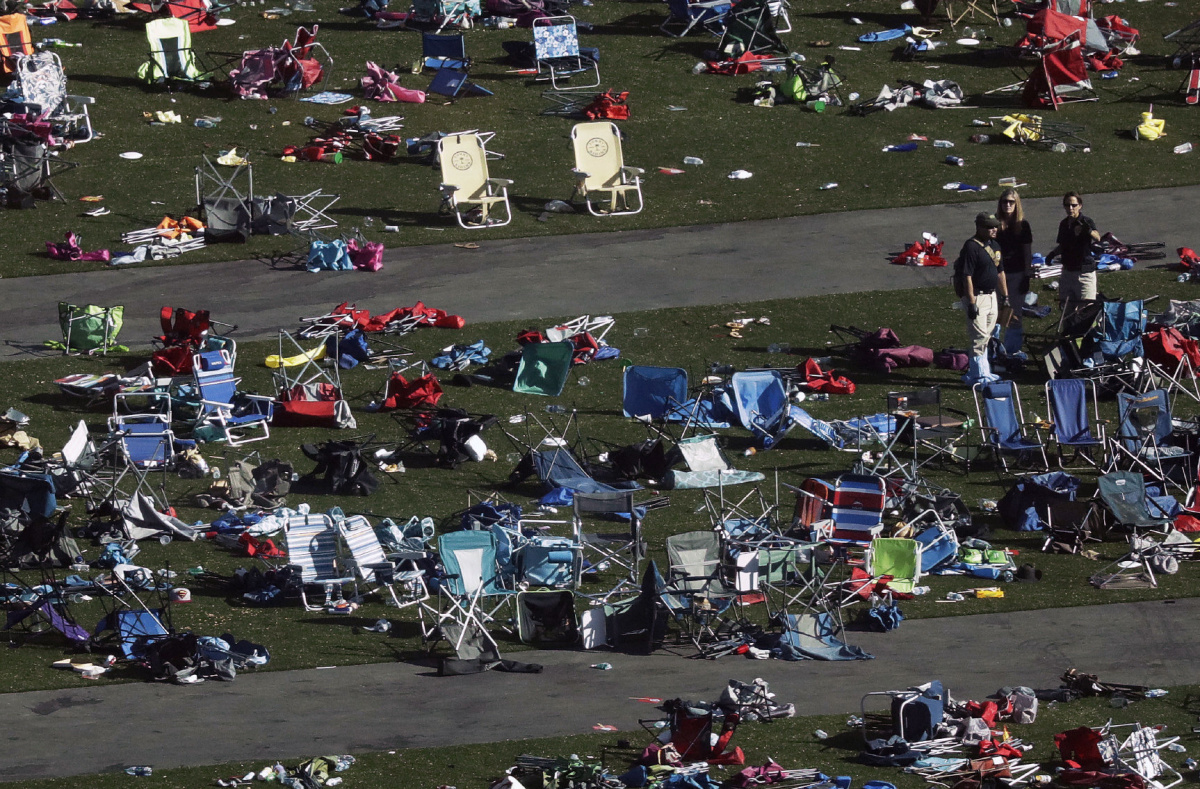 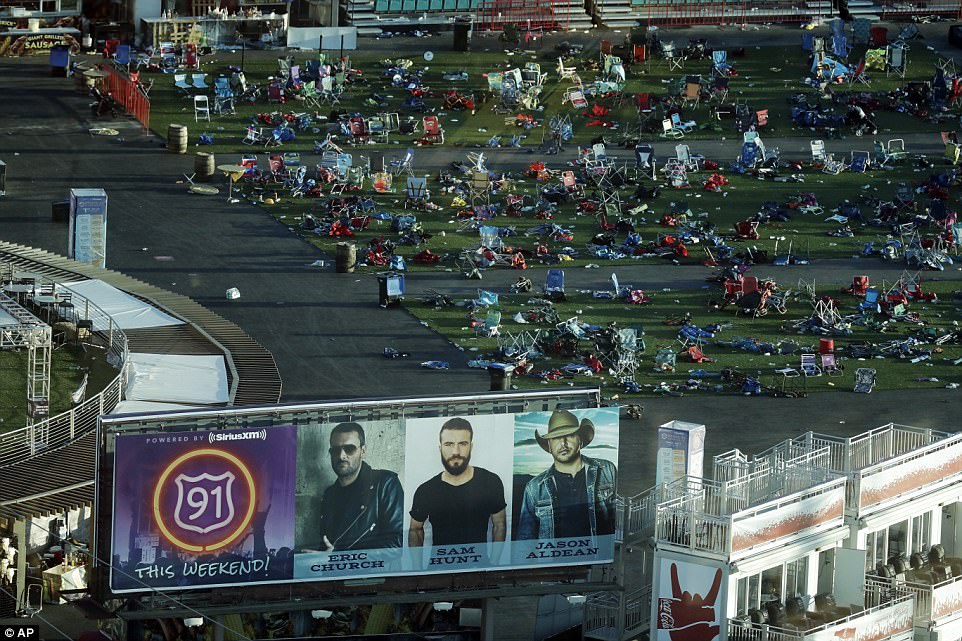 Who is this man? One of the "victims"? This is not Charleston Harfield who was the only black man that died at the concert. Also, once again, no blood. So obviously a staged photo like them all. 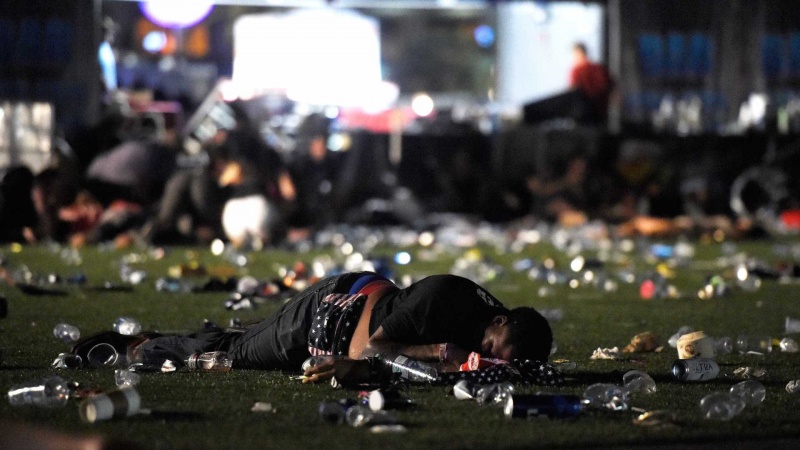 The "victim" with blood going in the wrong direction on her legs. This is the only picture with any blood and the blood goes against Newton's "Law of Gravity". It should be running down her legs, not across them. Another picture of the concert area after the shooting with the "victims" still on the ground. 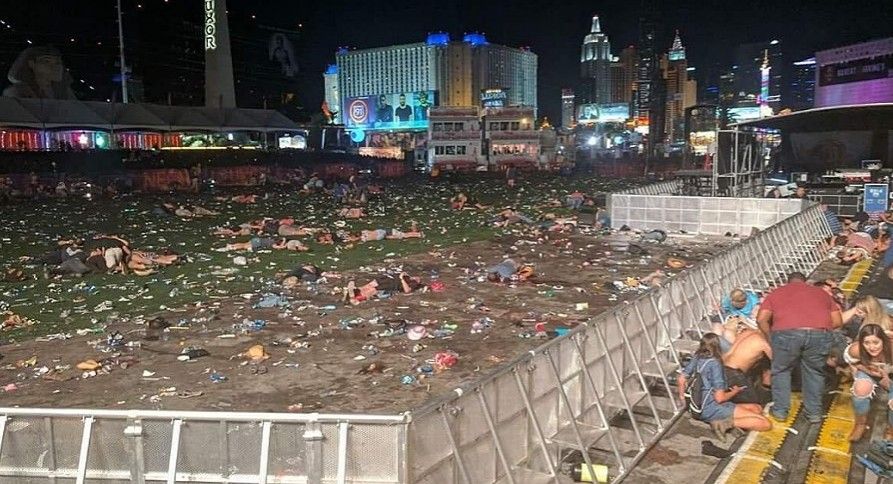 Taking a closer look at the picture above on the top left side of the pic, look at the stack of bodies laying there on the field, looking as though these people were very much alive, with one person kneeling. Again I reiterate, NO BLOOD!
Next, the bullet holes found at the concert site. With 600 people shot how many rounds did the shooter use? I would estimate about 2,000 rounds. There were no pictures of the concert area after the shooting found on the internet. However, there was a video taken with a high powered video camera in the same area as the gunman stood over and over demonstrate that there were no bullet holes anywhere. Even the glass windows remained intact. The video link will be listed below. Here are a few pics captured from the video:

Here is the one bullet hole found which is not in the concert area but across the street at the airport.

You be the judge!
Link to the FBI clean-up after the shooting:
https://archive.org/details/LasVegasShootingFBIEvidenceScrub

Mona Alexis Pressley has done brilliant work on Las Vegas and on Parkland, including tracking down the decedents on whom the obituaries in Las Vegas were based, who died in different states or on different dates or from different causes of death. Her research has been having a significant impact on understand these "false flag" events.
Posted by Jim Fetzer at 5:49 PM 0 comments
Posted by Baldwin Templeton at 2:56 AM