“The people will not revolt. They will not look up from their screens long enough to know what’s happening”.

“Censorship is crucial to Communists. I have seen leaders pull books from shelves and warn members to destroy them. Communism is the New World Order and is controlled by Masonic Jewish Bankers.”

— Bella Dodd, Author and Communist Party Leader
of the 30’s and 40’s.
Author Henry Makow in his review of Bella Dodd’s 1954 book, “School Of Darkness,” reports that Dodd referred to the Communists as Satanists who operated by infiltrating and subverting social institutions like churches, schools, mass media and government. Dodd revealed that the American Communist Party had 1100 members become Catholic Priests in the 1930’s alone. Here in America today the Catholic Church has nearly been destroyed by an epidemic of pedophile priests.
Schools are banning books and our children are being dumbed down by “Common Core.” Amazon Books, the largest bookseller in the country, and the Jewish owned tech companies, YouTube, Facebook, Google,and Twitter are using the Jewish, racist, Anti Defamation League (ADL) and Southern Poverty Law Center (SPLC) as arbiters to ban books and purge Conservative, Christian, Patriotic, or any video’s and websites that don’t go along with the mainstream media liars whose networks are all Jewish owned.
Most Americans know that there is something horribly wrong with this country but can’t put their finger on exactly what it is. Many read about the “Deep State” and aren’t sure who these people are or why they are such a grave threat to our country.
The majority of people in western countries would be shocked to learn that a network of elite pedophiles control these countries and use their intelligence services to set up and blackmail politicians to keep them in line. Some of the richest and most powerful men, as well as teachers, judges, scout leaders and police officers in the US, Ireland, Canada, Spain, Australia, Belgium, Great Britain, Italy, Denmark, and Norway among many others, are involved.
Just last July before his meeting with Donald Trump at the G-20 summit, Vladimir Putin issued a warning that if Trump didn’t expose these pedophiles he would. Journalist Liz Crokin believes that is what the thousands of sealed indictments Trump’s team has handed down in the last 6 months will deal with.(see: The Franklin Cover-Up )
In the U.S. the National Security Agency(NSA) and the Senior Executive Service(SES) have total access to spy illegally on Americans and have been at it for years. The NSA is responsible for global monitoring collection, and processing of information and data for foreign intelligence and counterintelligence purposes.
Israel receives all of the raw NSA data gathered on every American. Why? Israel along with traitors in our government are currently trying to outlaw criticism of Israel by Americans, another blatant attack on the First Amendment
*An NSA whistleblower says they mostly illegally spy on Americans.
Former NSA Senior Intelligence official and whistleblower William Binney said 12 years ago that the NSA wasn’t just spying on the American people but was illegally spying on US Congressmen, Senators, Federal Judges, and even Supreme Court Judges.
Remember what happened to the stubborn Senator in the “Godfather” who wouldn’t play ball with the Corleone family? A couple of days later he woke up in bed with a dead hooker. Is that’s how they keep Congress in line? Is that how they got John Roberts to stab Americans in the back as the deciding SCOTUS vote to put Obamacare over the top?
*In a recent Monmouth poll, 80% said they believe the government spies on them.
The (SES) Senior Executive Service is not well known to the public. It is a position classification in the civil service of the US Government, analogous to a general officer or a flag officer. The SAS employees report directly to presidential appointees and are said to make more than Congressmen.
These people are the link between politics and the administration of the Federal Government and make up much of the Deep State. Author Field McConnell says one must already be a compromised traitor to be recruited by the SES who employ 10,000 people. 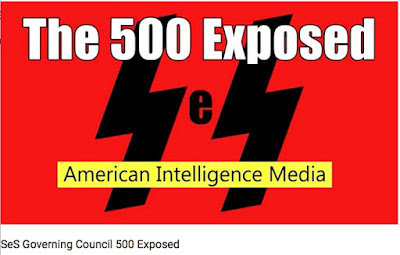 [Editor's note:  The core of the SES consists of 500 lawyers embedded within the Department of Justice, who determine the salaries of others with a reach of some 10,000, which appears to constitute "the Deep State" (or government within the government). Check out the videos about the SES on the internet) here or here. Extremely important!]
Field McConnell is a graduate of The Naval Academy, a former Marine fighter pilot, a retired commercial pilot for Delta, a 911 whistleblower, an author of 12 books, a talk show host, and lecturer. He also has inside information on the SES. You see, McConnell’s sister, Kristine Marcy, runs the SES.
McConnell says his sister out ranks Hillary Clinton and is a Satanist, as are most of the members of the Deep State. He says his sister was involved in 911 and the Oklahoma City bombing, and other false flag attacks along with other prominent politicians like Hillary Clinton, George W. Bush, John “Traitor” McCain and a long list of other traitors well known to the American people.
We are now in the middle of the worst political scandal in our country’s history and the majority of the media simply refuses to cover it. Instead, without a single bit of evidence, the media continues to attack and accuse Trump. This is right from the Communist Jew Saul Alinsky’s playbook, “Rules For Radicals.”
Accuse the opposition of crimes that you are guilty of. These “New World Order” Eichmann’s who masquerade as benevolent representatives are in reality agents of foreign interests and care nothing for our freedom, our sovereignty, the girl next door, or mom’s apple pie.
Some good examples of that are revealed in Peter Schweizer’s new book,”Secret Empires”, reviewed by Rebecca Mansour at Breitbart, which shows how these criminal politicians use their office to garner lucrative deals for their children and other family members.
*Ten days after Joe Biden and his son Hunter flew to China aboard Air Force Two, Hunter’s firm signed a $1.5 billion deal with a Chinese bank. Suspicious? You bet.
*Texe Marrs reported that two months before Obama’s Neo-Con henchman Victoria Nuland gave the green light to take out Ukranian President Yanukovych in an illegal coup, Vice President Biden travelled to Ukraine and met with the Chief Rabbi and other top Jews. He also met with executives of Burisma, the largest natural gas company in Ukraine.
*In 2014 Hunter Biden was put on the board of directors of Burisma.This, of course, happened less than a year after the US and Israel led a coup that took out the duly elected president Yanukovych for corruption. You can’t make this stuff up!
*Globalist and US Senator Mitch McConnell and his wife Elaine Chao, Trump’s Secretary of Transportation, have received millions of dollars from a family member who sat on the board of a top Chinese government military contractor. Chao’s father is a Chinese shipping magnate worth billions.
*In 2014 90 pounds of cocaine were found on one of Mr. Chao’s freighters. The U.S. media wasn’t very interested as there was no coverage of it at all. Since most experts agree that China poses a much bigger threat than Russia, why is none of this not a bigger deal?
Congress just sold out to defense contractors approving over $700 billion for the military while they are busy planning our next war for Israel. Don’t believe me? Lt.General Richard Clark recently told the Israeli media that “US troops should be prepared to die for the Jewish state.” Just who in this administration is in charge of our foreign policy disaster in Syria, Jared Kushner?
Trump just announced that McMaster is out as National Security Advisor and has been replaced by “Neo-Con John” Bolton. Nothing good will come of this since Bolton gets his orders from Tel Aviv. Look for things to heat up in Syria sooner than later.
They’ve also sold us out to the pharmaceutical companies who continue to push ineffective and dangerous vaccines on trusting and unsuspecting Americans. Mandatory vaccines for all Americans is next on their agenda. 128,000 people die every year taking medication as prescribed by their doctor.
The Marxists on the left are now attacking freedom of speech daily. New words we can’t say, books we aren’t allowed to read, sites we are no longer allowed to visit, videos we are no longer allowed to see. This is moving toward Soviet-era type censorship at lightning speed and no one has any answers. Trump could make moves to stop this, why hasn’t he? He won the presidency because of many of the sites being targeted and banned.
With a crucial election approaching in November just what is the Democrat platform? Is their position on immigration amnesty and open borders? Will their solution to gun control be gun confiscation? Will they continue to use children to make their unreasonable, irrational, and unconstitutional demands that the majority of Americans don’t support? Will they continue to attack Christian’s and the traditional family while promoting the gay/transgender agenda?
Will they continue to ask us to sacrifice our freedom’s at the altar of multiculturalism? Will they continue the blatant censorship that would make Stalin blush? These are all right out of the Communist playbook and They are all on the agenda of the Southern Poverty Law Center and the Anti Defamation League. Two groups that should never be allowed to decide what people in a free society should be allowed to read, view, or discuss.
Patrick J. McShay is a writer and researcher whose articles have appeared on:  thetruthseeker.co.uk, operationdisclosure.blogspot.com, rense.com, stateofthenation2012.com, themilleniumreport.com, davidicke.com, jamesgfetzer.blogspot.com, beforeitsnews.com, rumormillnews.com, whatreallyhappened.com, sgtreport.com, blacklistednews.com,
among many others.
Posted by Jim Fetzer at 12:21 PM 0 comments
Posted by Baldwin Templeton at 4:49 AM