Morgan Reynolds
On January 19 a fire broke out in a 17-story high rise in Tehran and the building collapsed, killing over 20 firefighters.  Photos and videos show that the building was no paragon of steel-framed skyscraper strength.
The “semi-official” Tasnim news agency reported that business units and shops inside the building were not insured because of a lack of required safety measures.
The Plasco building, Iran’s first private high-rise, was built in the early 1960s by an Iranian-Jewish businessman.   His granddaughter, Shahrzad Elghanayan, writes, “Instead of preserving the edifice, the building’s new owners allowed what had once been a bright, shining tower of Tehran’s skyline to turn into a ramshackle space, dwarfed and supplanted 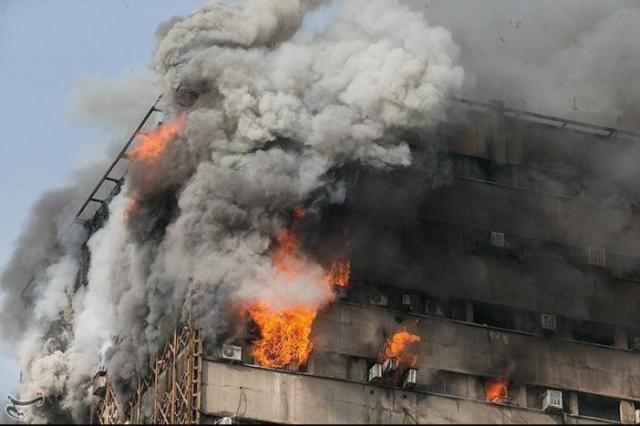 Fire breaks out in a high-rise building in Tehran, Iran January 19, 2017. Tasnim News Agency/Handout via REUTERS
by thousands of new skyscrapers.  Space originally designed for offices had been carved up and converted into hundreds of garment workshops.”  A fire brigade spokesman said: “Even in the stairwells, a lot of clothing is stored and this is against safety standards. The managers didn’t pay attention to the warnings.” The head of the shirt maker’s union, Mojtaba Droodian, told local Fars agency that the fire extinguishers were empty. 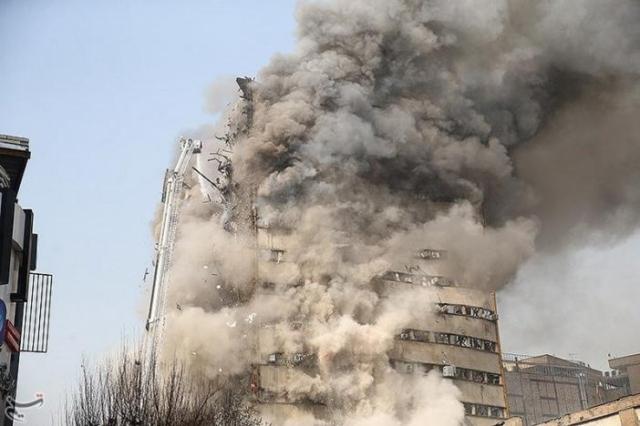 Smoke rises from a blazing high-rise building in Tehran, Iran January 19, 2017. Tasnim News Agency/Handout via REUTERS
Elghanayan remarked, “If they were aware of the building’s violations, why hadn’t the owners or the city shut Plasco down until it was up to code?…the least they could have done was to ensure the safety of the people inside.” 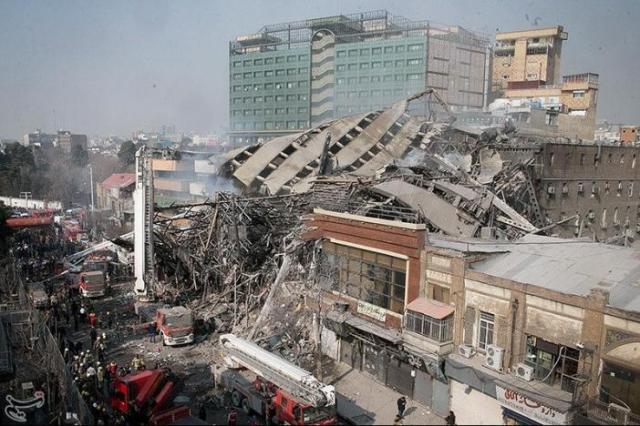 The collapsed building towers over vehicles!
We can learn something about 9/11 from the tragic Tehran collapse.  How?  Because the Tehran event is powerful evidence confirming Dr. Judy Wood’s forensic investigation of 9/11 (p. 132), namely, post-collapse pictures reveal a Pasco building debris pile almost three stories tall, approximately what Dr. Wood teaches us to expect from a collapse or demolition of a 17-story high rise (17 floors x 0.125 = 2.125 floors).  Call it the 1/8+ rule.  Another example is the Seattle Kingdome which was 250 feet tall and left a 30-foot tall debris pile (Wood, p. 74).  By contrast “The [World Trade Center] rubble pile was no more than 2% of the original building height” (Wood, p. 132). 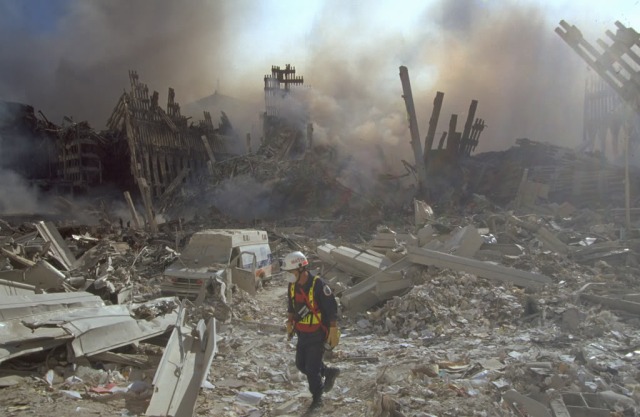 Ambulance at WTC, approximately the height of debris pile!
Say what?  Let’s see: the rubble pile should have been 110 floors x 0.125 = 13.75 floors, not two stories.  Incredible!
Rubble should have been stacked 14 stories tall for each twin tower yet most of the WTC site was much closer to a zero “pile” or “stack” than 14 stories.  And no, the missing debris was not packed into the basement (Wood, pp. 54-60, 188-9).  Conventional calculations show there should have been 1.2 million tons of debris on the ground yet the photo record and witness testimony are “clearly not commensurate with that amount of debris” (Wood, p. 195).
By itself, the paucity of debris at WTC rules out airplane-fueled fires, controlled demolition, thermite, and mini-nukes as causes of the obliteration of the twin towers.

“Guys, there used to be 106 floors above us and now I’m seeing sunshine.” — Jay Jonas, firefighter, survivor in stairwell B.
Why?  Because none of these devices can convert a steel/concrete tower to primarily dust.  Airplane crashes, welding material and kinetic explosives pulverize (“chunkify”) solids, breaking them into smaller, recognizable pieces, with only incidental dust.  These means cannot turn two massive towers primarily into fine powder.  Nope, only an “unconventional” agent of obliteration could cause such an effect (“dustification”).
The other evidence gleaned from the WTC confirms and reinforces the extraordinary absence of debris too: huge, dense, unprecedented dust clouds, negligible seismic impact, a leak-proof, undamaged WTC bathtub, a lack of bodies, toilets, computers, office furniture and other contents  of the towers, etc.  Only one file drawer was ever recovered.
Then we have a New York Times article celebrating the fact that “[Those heading the cleanup and those removing the rubble at ground zero are trumpeting nothing short of a construction miracle…. The cleanup, it turns out, will take no more than nine months and cost no more than $750 million” instead of a year plus and $2.5 billion.  None of the alleged causes of the speedy clean-up included the mysterious lack of debris.  The NYT did note that “And the huge concrete basin that kept the Hudson River from leaking into the site has not, as many engineers feared, developed major cracks, which might have taken months and hundreds of millions of dollars to repair.”  No one thought to ask, however, how come 1.2 million tons of debris crashing down on the basin/bathtub failed to cause any damage?  What the blazes?  No sense asking difficult questions,  Never know where that might lead.
(Special thanks to a nomoregames.net booster)

Editor's note: Morgan has done a brilliant job of displaying the proof that what happened on 9/11 was covered-up because it was "an inside job". While I believe there are powerful reasons for preferring an explanation in terms of the use of mini or micro nukes, we agree that there was no "collapse" of either of the Twin Towers. Here is another photo illustrating the proof that the Tehran collapse provides: 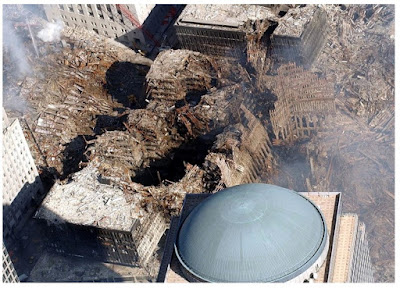 To the left, observe the 5.5 floor debris pile from the collapse (due to controlled demolition) of WTC-7, which was a 47-story building (in my estimation, the most robust ever designed by the hand of man). To the right, the absence of a debris pile from the destruction (by a demolition under control) of the 110-story WTC-1 (North Tower), which was obliterated to or even below ground level. Q.E.D.
Posted by Jim Fetzer at 10:58 AM 1 comments
Posted by Baldwin Templeton at 2:48 AM