Vanessa Beeley
21st Century Wire
“We see a lot of devastation. When you see a young child (Omran) who is obviously in shock sitting in the back of an ambulance, you are concerned with how he is, what happened to him and what situation has brought him there. The ability of the photographer to capture that moment renders it one of the best news pictures of the year.” ~ Stuart Hannagan of Getty Images
Don McCullin, one of the world’s finest photographers of war and disaster, said the digital revolution meant viewers could no longer trust the truthfulness of images they see. He said photography had been “hijacked” because “the digital cameras are extraordinary. I have a dark room and I still process film but digital photography can be a totally lying kind of experience, you can move anything you want … the whole thing can’t be trusted really.” ~ The Guardian, emphasis added.
Two very contrasting opinions on the digital age of photographic sleight of hand and perception altering influence.
Everyone will remember the “iconic” image of Omran Daqneesh in August 2016, taken during the fiercest fighting to liberate East Aleppo from Nusra Front-led occupation. This single image took the corporate media by storm eliciting international clamour for a No Fly Zone in Syria and further illegal intervention into a sovereign nation’s internal affairs. This image circled the globe as fast as internet would allow it to travel with no corporate media, independent verification of either context or source.

CNN reporters broke down in tears, and extraordinary displays of breathy, emotional, outpourings stormed onto our TV screens to decry the “brutality of the Syrian regime” while no verification of the image had been conducted. In short, it was the perfect example of the knee-jerk reaction policy of both corporate media and the western regimes, whose narrative is wholly and unquestioningly supported by their media megaphones.
According to the FT, Omran was the “human face to the suffering in Aleppo“, he was, according to the US State Department, “the real face of what is going on in Syria”.
“That little boy has never had a day in his life where there hasn’t been war, death, destruction, poverty in his own country,” ~ John Kirby
In December 2016 Getty Images launched their ‘Year in Focus‘ — a collection of iconic photos that have defined 2016. According to an article in Huffington Post, Getty had covered 130,000 events worldwide and taken over 20 million images, an insight into the tremendous power this organsiation has over the image industry that shapes our perspectives on world events.
TIME produced a heart-rending article on the events surrounding this iconic photograph. They introduced us to Mahmoud Raslan, the photographer:
Mahmoud Rslan, a 27-year-old photographer from Aleppo, took the picture of Omran at the scene. He managed a pastry shop before the revolution and, beginning in 2011, participated in the protests.
Raslan gave a tear-jerking account of his role in Omran’s rescue and the taking of the arresting image:
“While taking the photo and looking at the boy, I was crying, while pleased that I was doing my job and taking a powerful photo. I wanted the focus to be clear. When I really started to sob was when I saw the eight-year-old sister of Omran. His sister was as calm as him and she had a similar injury in the face and eye. She made me cry 10 times stronger. We are humans, we are people. I was crying for the children and fearing that my daughter may go through the same experience.”

Mahmoud Raslan, crying for Omran but grinning with child beheaders, Nour Al Din Zinki.
The only problem is, Raslan was far from an innocent observer of a child’s plight. He was swiftly identified as the supporter and selfie-taker appearing with Syria’s militant extremist group, Nour Al Din Zinki, notoriously noted for their brutal torture, humiliation and public beheading of 12 year old Palestinian child, Abdullah Issa. 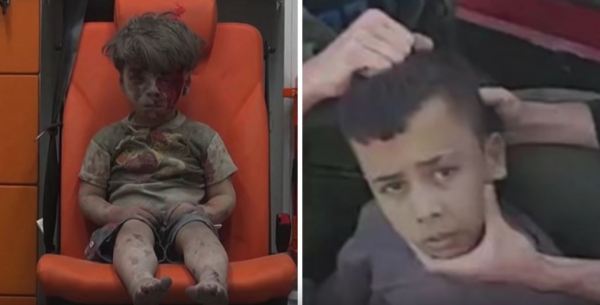 On left, Omran Daqneesh, on right 12 year old Abdullah Issa, beheaded by Nour al Din Zinki, one month prior to Omran’s image being circulated.
Syrian Girl’s media channel perfectly demonstrated the extreme hypocrisy surrounding the circulation of Omran’s image and the international uproar, when compared to the muted response to the publicly displayed and truly hideous atrocity committed against a child by an extremist group, known to be funded by the United States.
In addition, the images and footage of Omran, were circulated by none other than French Foreign Office funded, Aleppo Media Centre, already exposed by 21WIRE as the Syrian propaganda branch of Canal France International, the French cooperation agency and media operator of the French Ministry of Foreign Affairs. Aleppo Media Centre worked exclusively in Nusra Front (al Qaeda in Syria) terrorist-occupied East Aleppo, supplying anti-Syrian government images and reports to US and western media.
Read 21st Century Wire’s article here: Aleppo Media Centre Funded by French Foreign Office, EU and US
Getty Images and Sunday Times Awards for “Arresting Images”.
On the 27th January 2017 the BBC broadcast their “Media Show” with presenter, James Harding. Part of the programme covered the Getty “Arresting Images” exhibition. Harding informed us that Getty images have put together an exhibition of what they consider to be the most striking examples of photo-journalism from 2016. Harding then visited their London gallery with Bette Lynch Director of Getty’s News Photography for Europe, the Middle East and Africa, accompanied by Eleanor Mills, Editor of Sunday Times Magazine.
Lynch and Mills both wax lyrical over the image of Omran, its striking blend of “colour and composition”, which lend added depth to the evocative force of the image, are remarked upon, enthusiastically. Lynch describes how the image is “heartbreaking” for her, just before Harding asks a surprisingly pertinent question, for the BBC. We have included an edited version of the Media Show, the full version may be heard here.
Audio Player
00:00
00:00
Use Up/Down Arrow keys to increase or decrease volume.

HARDING: “This picture raised some questions re context, the thing about a single snapshot images quite often there are questions of context..whereas with TV you see what happens before and after. I have a vague recollection of seeing the ambulance door open and the boy being put into the seat….I dont know if they [paramedics?] were kept away, while the photographers had their chance…so there is an element of staging. So if it was posed, Bette, is there anything about this picture that you think is worth questioning?” 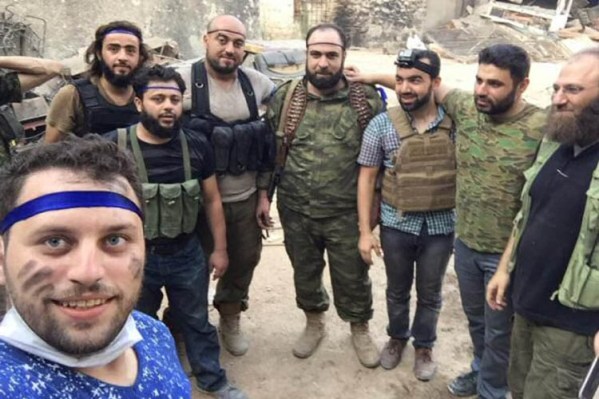 Mahmoud Raslan, photographer of Omran with child beheaders, Nour Al Din Zinki
The response from Bette Lynch is without hesitation:
“No I dont..and I think it comes back to the truthfulness of imagery and where the images are sourced from and that they are reliable photojournalists.”
“Reliable photojournalists” like Mahmoud Raslan photographed here with Nour Al Din Zinki and wearing the Zinki headband, thus affiliating himself with this group  of child torturing, US funded, extremist mercenaries, who participated in the Nusra Front/Al Qaeda-led brutal occupation of East Aleppo for almost five years. 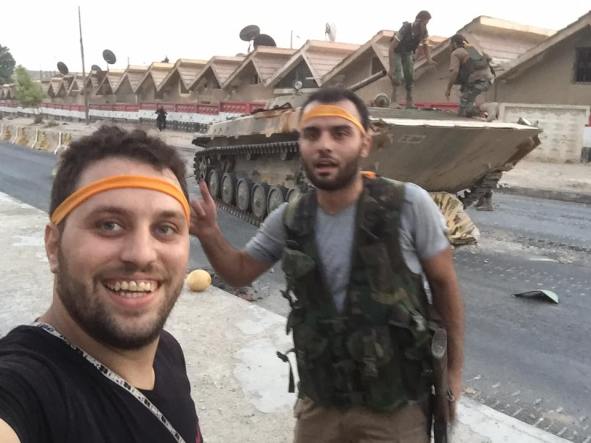 Lynch further compounds Getty’s faith in Raslan as a reliable source of war imagery from Nusra Front-dominated East Aleppo by stating that these are “photo-journalists at the peak of their game, citizen journalism has a place..what we see here is journalism at its very peak.” According to Lynch there are “millions of photographers out there…these guys we trust”.
At this point, Harding abandons his attempt to question the credibility of Omran’s celebrated image. He fails to ask the burning question, where is Omran now… what happened to this child, the “face of human suffering” in Aleppo? He fails to mention the undeniable evidence of photographer, Raslan’s connections to extremist, atrocity-committing factions in East Aleppo. He allows Getty’s Director of News Photography, to dismiss claims of staging with a declared trust in terrorist supporters as premise for the veracity of this photograph. A staged photograph that almost precipitated the terrifying escalation of a conflict between Russia and the US on Syrian soil.
This flaccid investigative journalism has become the hallmark of 21st century corporate media. The truth is denied to us because it is auto-dismissed by these half-hearted prods at the darkness that is Al Qaeda generated news speak. Omran is not to blame, he is another in a long line of children being exploited by these globalist circus performers who call themselves journalists.
Children are being exploited to promote a war that will kill more children. This is the more sinister, bigger picture, we should be protesting. These children already bear the wounds of an externally imposed war, now they will be forced to bear the deeper scars of being, indirectly, responsible for further deaths, further bloodshed in their homeland.
Omran will grow up knowing that his, suspected, “staged” image eclipsed the very real images and footage of another young child, Abdullah Issa, whose severed head was ignored by the same media and international community who made Omran an icon, overnight.
We should not underestimate the devastating effect this knowledge may have on a child like Omran. Children should not be coerced into calling for war, like Bana Alabed, they should not be used as props to support terrorism and neocolonialist geopolitical gains. What the BBC is tacitly supporting, is effectively, NATO and Gulf state child abuse to support what is already a criminal foreign policy, designed to reduce Syria to a failed state, under the banner of humanitarianism.
Yes, children must be protected from the horror of war but right now they are being used to prolong the horror of war. Getty Images, and the Sunday Times just awarded an Al Qaeda affiliate, a prize for child exploitation. The BBC failed to condemn this media, universal, platforming of extremism in Syria, because the BBC is an integral part of the terrorist cheerleading apparatus. This nomalisation of terrorism and extremism is a disease that is sweeping the corporate media channels in the west and it must be eradicated before we, the public, are irrevocably infected by its perversion of the facts.
***
READ MORE SYRIA NEWS AT: 21st Century Wire Syria Files
SUPPORT 21WIRE and its work by Subscribing and becoming a Member @ 21WIRE.TV

Posted by Baldwin Templeton at 2:51 AM