The story of Winnie the Pooh laid bare by By Anna Tyzack,from The Telegraph

The story of Winnie
the Pooh laid bare 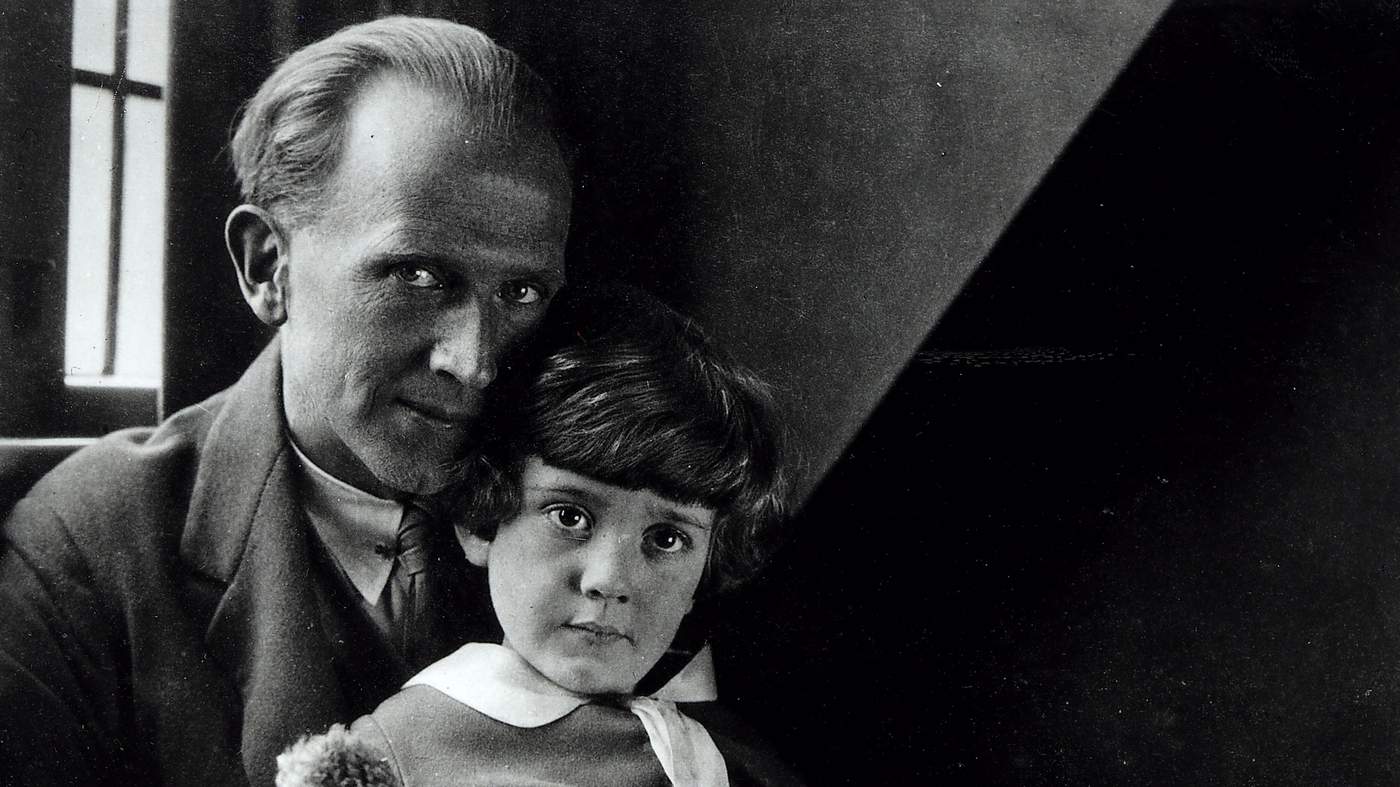 By Anna Tyzack, Sunday 20 December, 2015
Cole Mattick, an inquisitive three-year-old from Toronto in Canada, often asks his parents if he’s related to Winnie the Pooh. Usually when he is tucked up in bed and supposed to be fast asleep.
No, his mother Lindsay replies, at least not by blood. And then she’ll tell him - for the thousandth time - how the world’s most famous honey lover came to be an important member of their family. 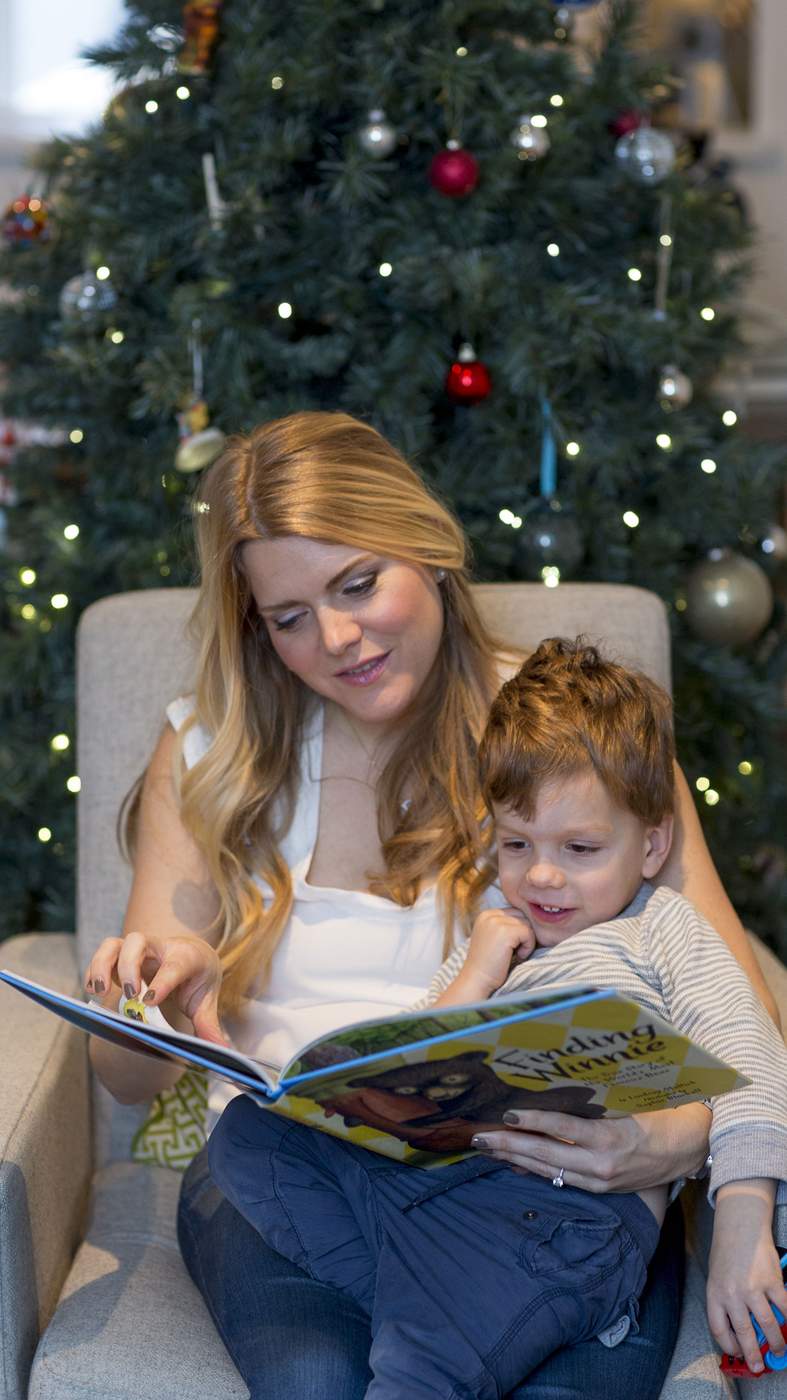 Lindsay Mattick shares her family history with son Cole.  C.Farquharson
“The fact that Cole is part of the story behind the Winnie the Pooh story is still a little too complex for him to understand,” Lindsay explains. “But he’ll figure it out in due course. As a child, I referred to Winnie as my great-grand-bear.”
The ‘prequel’ to Alan Alexander Milne’s 1926 collection of stories, Winnie the Pooh, begins in 1914 in Winnipeg, Canada.
Lindsay’s great grandfather, Harry Colebourn, a vet, waved goodbye to his family to embark on a 1,500 mile rail journey to a military training camp near Quebec.
He was to join the Canadian Army Veterinary Corps, tending horses on the Western Front in World War I.
When the train pulled in to White River, Ontario, Harry stepped out to stretch his legs and noticed a man with a bear cub tethered to a bench. 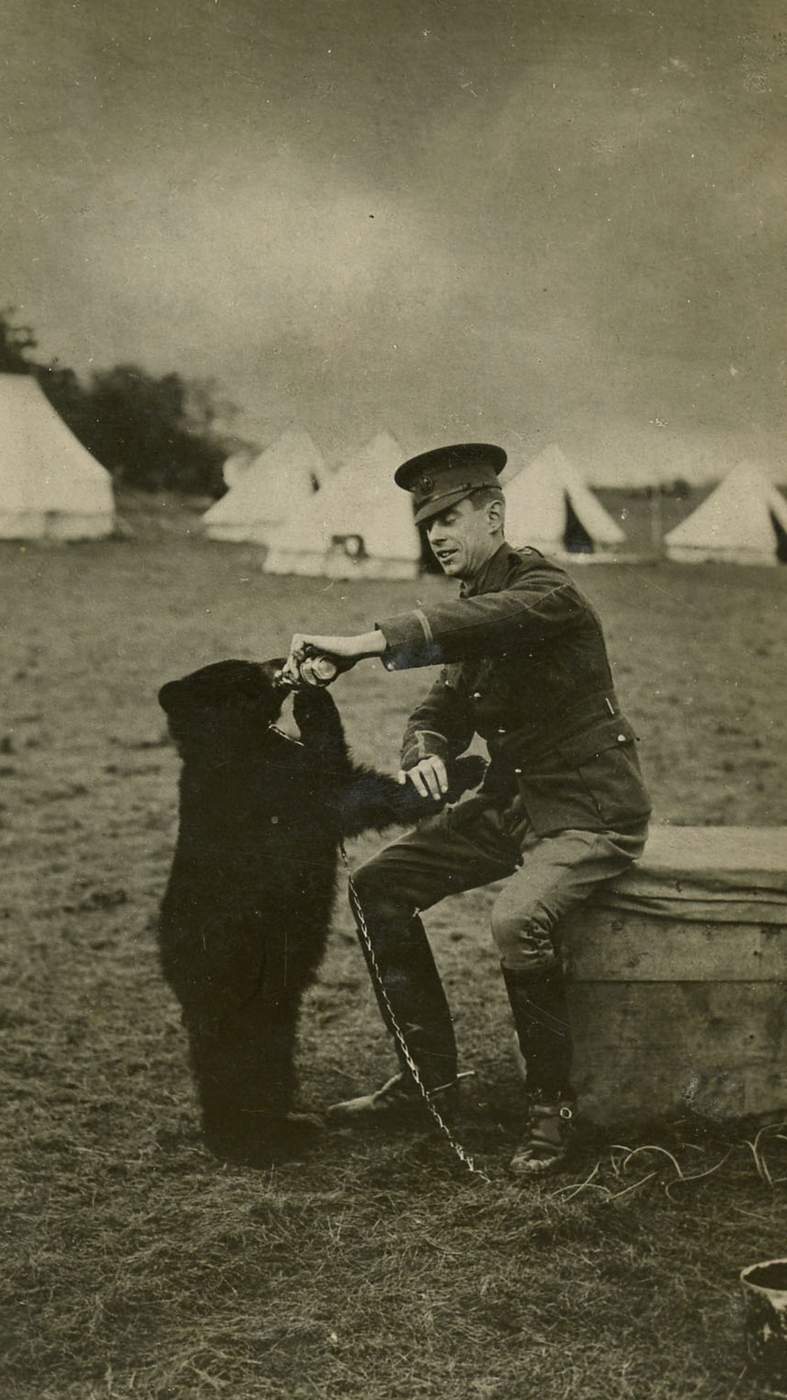 Lindsay's great grandfather Harry Colebourn in the military training camp with the bear cub he named Winnie
“He figured he must be a hunter, and that the cub had been left without a mother,” explains Lindsay, a PR executive.
A few short moments of deliberation later and Harry was carrying the cub onto the train, having handed $20 to the hunter.
It was the equivalent of nearly £180 today but according to Lindsay, her great grandfather was always hopelessly sentimental when it came to animals.
He resolved to call her Winnie (yes, the real Winnie was in fact a girl) after Winnipeg, his home town, and recorded the event for posterity in his diary: “August 24: Bought bear $20”.
"He could never have imagined how much joy that bear would bring,” Lindsay says. 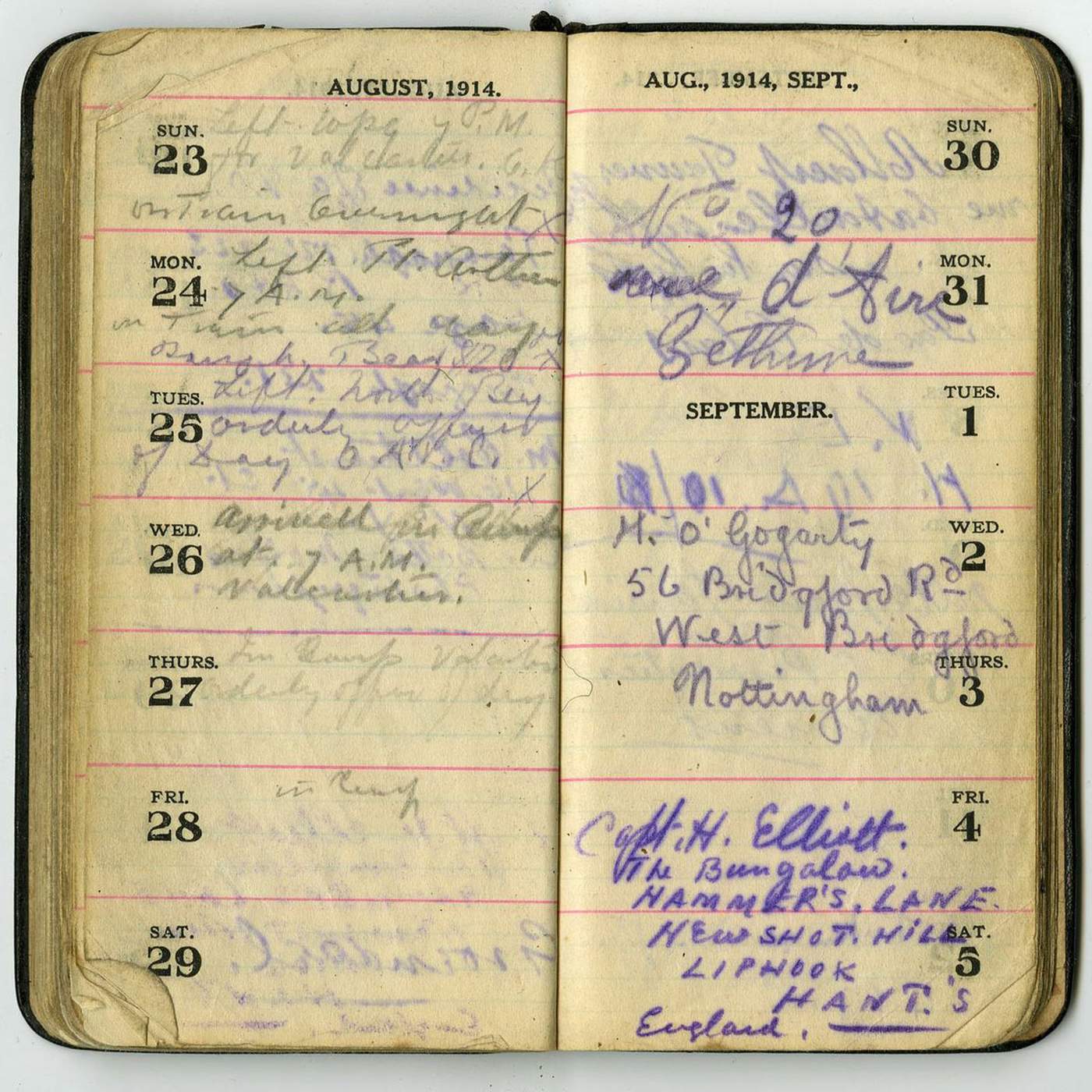 'Bought bear $20': Harry's diary entry on August 24, 1914
At the time, however, Harry’s corporal was far from pleased to find him fawning over a bear cub. When Winnie stood up on her hind legs as if to salute him, however, he couldn’t help but laugh along with the other soldiers.
With her thick, glossy black coat and tan muzzle, Winnie looked nothing like the fraying yellow teddy depicted by EH Shepard in the illustrations to Milne’s stories - and even less like the slightly chubbier Pooh from Disney’s film adaptations.
But Harry’s diary entries prove that Winnie shared certain character traits with her fictional namesake. For a start, she was always hungry.
Back then there wasn’t much honey about, says Lindsay, but Winnie went wild for the small bottles of condensed milk that were cherished by the soldiers.
A selection of Harry Colebourn's old photographs and documents, including the first edition of Winnie the Pooh. C.Farquharson 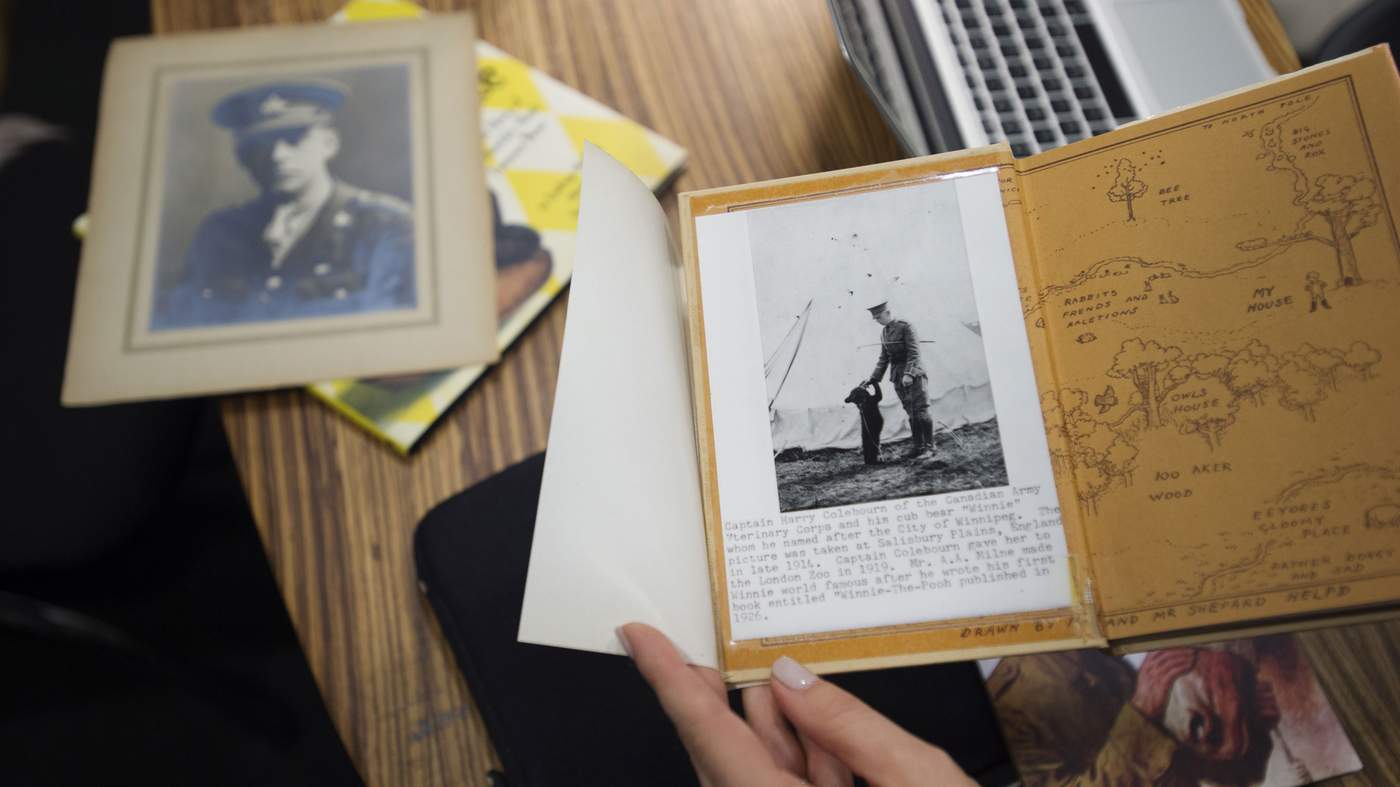 She’d hold them between her paws and gleefully slurp them in a couple of gulps, before lying on her back and humming with contentment.
She was also a natural born entertainer, climbing tent poles in the army training camp.
“Winnie the Pooh takes everything in his stride and our Winnie was like that too,” says Lindsay, whose well-thumbed first edition of Milne’s Pooh book has a grainy photograph of Harry and Winnie taped inside.
By the time Harry’s regiment, the Second Canadian Infantry Brigade, sailed to Britain, there was no question of Winnie being left behind in Canada. She travelled on board across the Atlantic as their mascot. 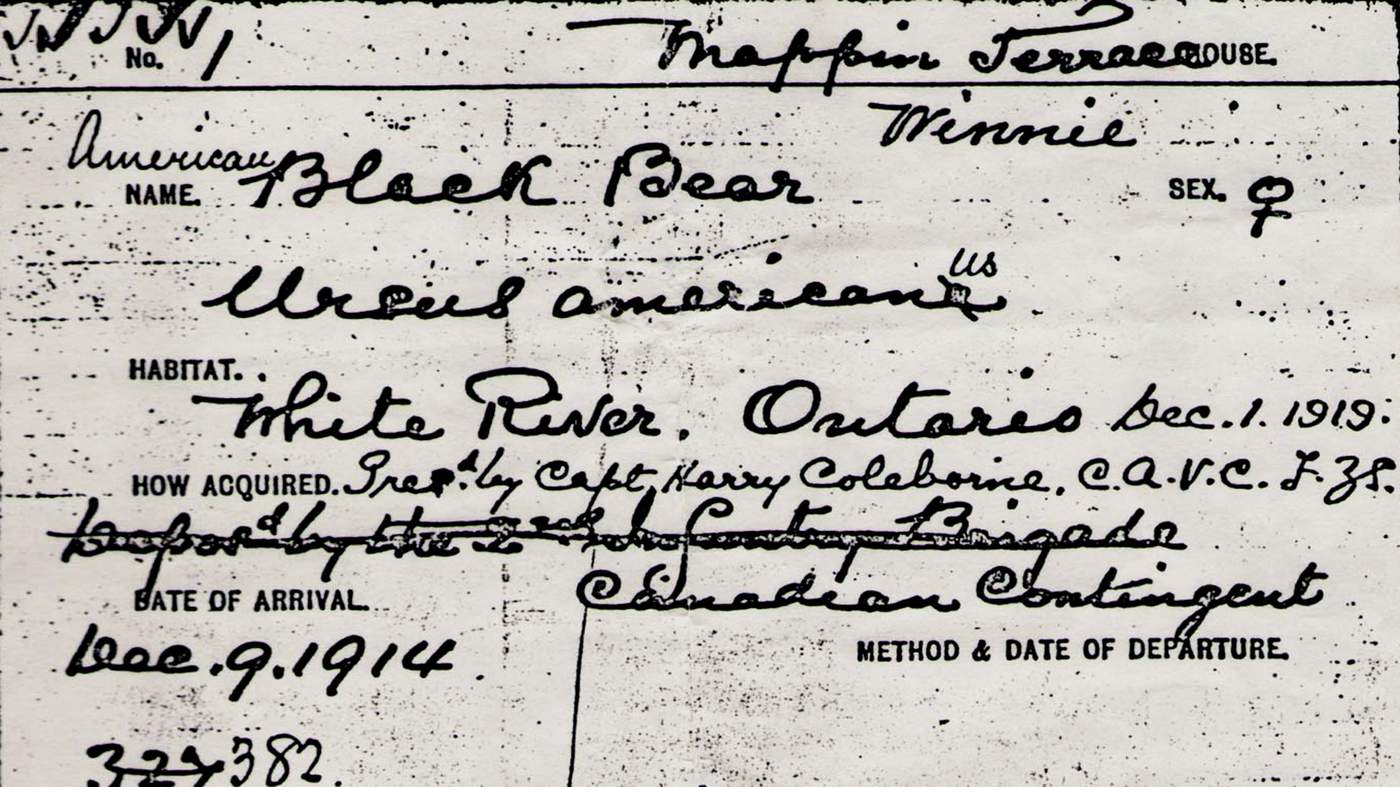 An animal record card following the acquisition of the bear
Winnie relished her new life on Salisbury Plain in Wiltshire, curling up next to her master’s camp bed at night - and waking him up in the morning by hanging from the top of the tent pole.
Unlike Pooh, “a bear with a very little brain”, Winnie was razor sharp and loved nothing more than a game: Harry would hide his possessions around the tent and within seconds Winnie found them. He taught her how to stand up straight and hold her head high.
“Harry and Winnie clearly had a remarkable friendship,” Lindsay says. “Having her as a friend must have made it easier to be so far from Winnipeg.”
When the time came for Harry’s regiment to leave for the front line, Winnie posed proudly with her comrades but Harry couldn’t bring himself to take her too. 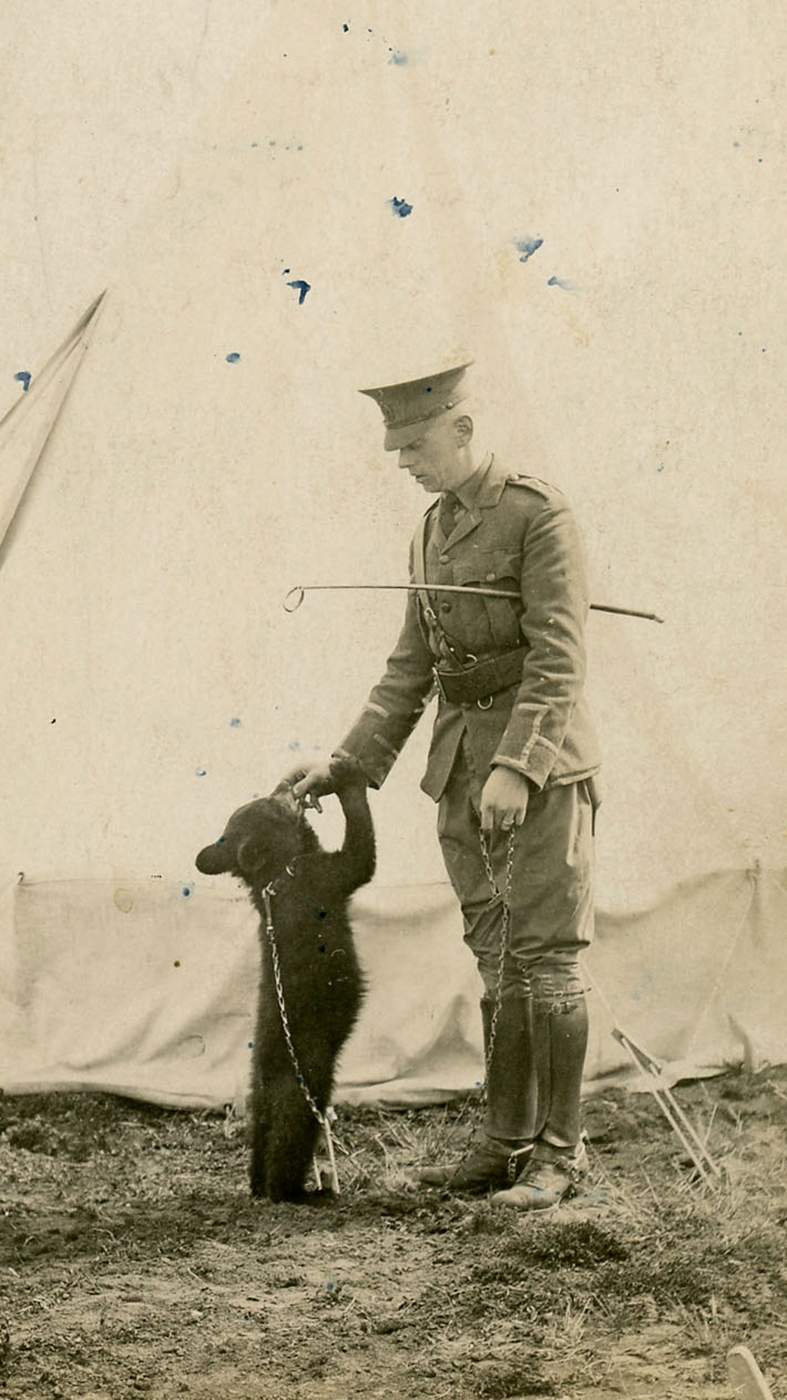 The bear prepares to entertain the troops
Instead, he took a day’s leave, and drove her up the A303 to London where he reluctantly left her at London Zoo.
Cole always finds this part of the story heartbreaking, but Harry’s letters to relatives at the time show that he planned to take Winnie back to Winnipeg with him after the war.
“As he bid goodbye to Winnie, he promised that he’d come back for her - he was sure the war was going to be over by Christmas,” she says.
By the time armistice was declared on November 11 1918, Harry considered it too cruel to uproot Winnie from her home in London.
“He visited her at the zoo and saw that she was the star attraction,” Lindsay says. “In so many ways it’s a blessing that she stayed. I always tell Cole that sometimes one story has to end for another to begin.”
Back in Winnipeg, Harry often talked about Winnie, recounting their adventures and showing photographs of her to his son Fred, who in turn passed them on to his daughter Laureen, Lindsay’s mother.
One of the illustrations in Lindsay's book, Finding Winnie 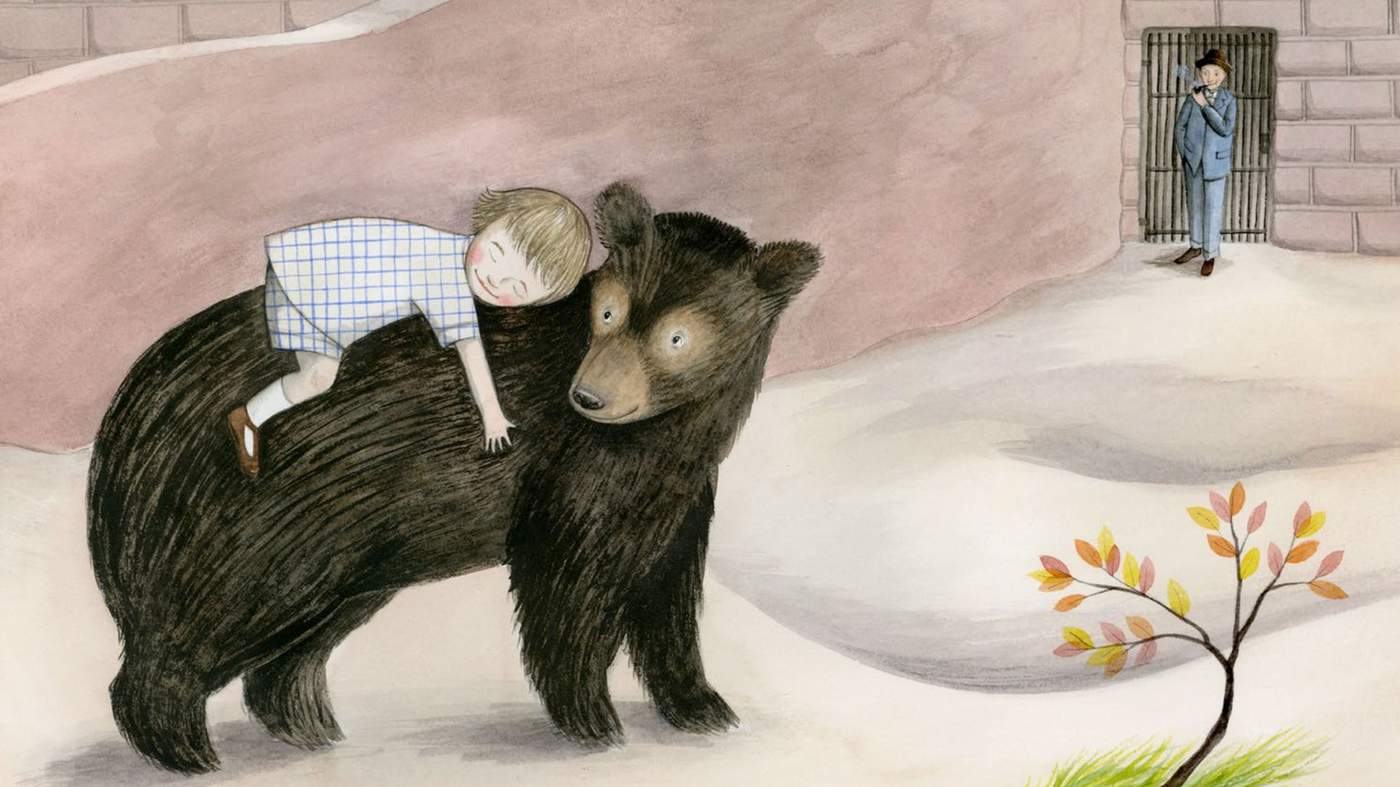 But it was only after his death in 1947 that Fred and his family learnt that Winnie’s friendship with a small boy at London Zoo had inspired one of the bestselling children’s book series of all time.
“Harry had no idea what a legacy he’d left,” Lindsay says.
The second - and better known half - of Winnie’s story begins in 1924, when Milne, who had also served in World War 1, as an officer in the Royal Warwickshire Regiment, took his four-year-old son, Christopher Robin to London Zoo.
So enamoured was the small boy by Winnie, that he immediately renamed Edward, his favourite teddy bear, after her, adding “the Pooh” as a nod to a swan he had befriended on holiday.
A photograph from the Milne family archive portrays Christopher Robin, in his overcoat and white knee high socks, alone in the zoo’s subterranean bear enclosure feeding Winnie honey from a spoon. His proud father observes from above. 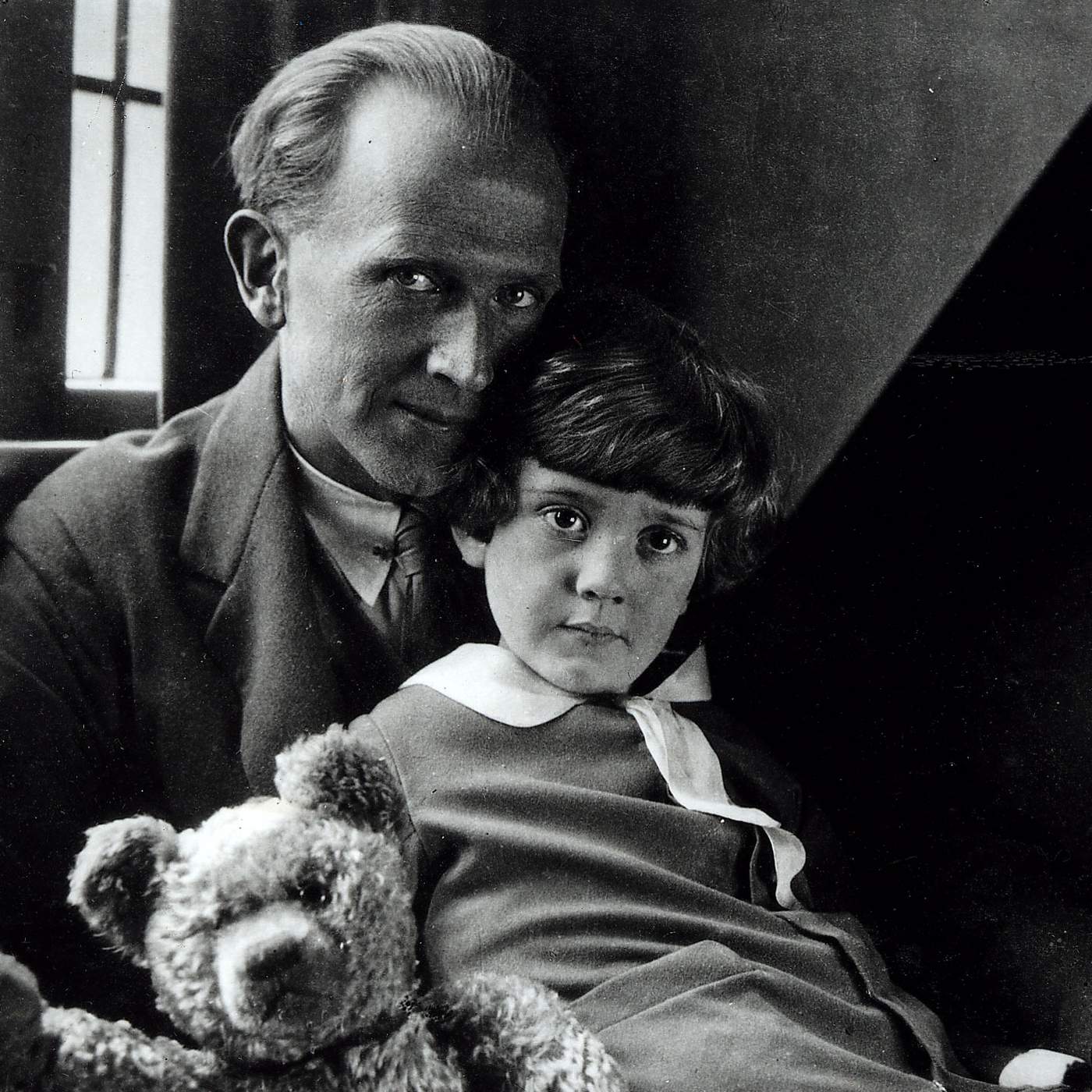 A A Milne with his son, Christopher. National Portrait Gallery
“The zookeepers said that she was the only animal they trusted ‘entirely’ but it’s astonishing that they allowed her to be alone with children,” says Lindsay.
The friendship that developed between Christopher Robin and the bear however, moved A A Milne to pick up his pen.
He began writing Winnie the Pooh the following year, featuring Christopher Robin, his teddy bear Winnie, and a cast of characters inspired by other stuffed animals belonging to his son: Piglet, Tigger, Eyore, Kanger and Roo, the original versions of which are now on display in New York.
Milne’s Pooh books were instant bestsellers in post First World War Britain, and have sold more than 70 million copies to date in 86 different countries. They are also one of Disney’s most successful film adaptations. 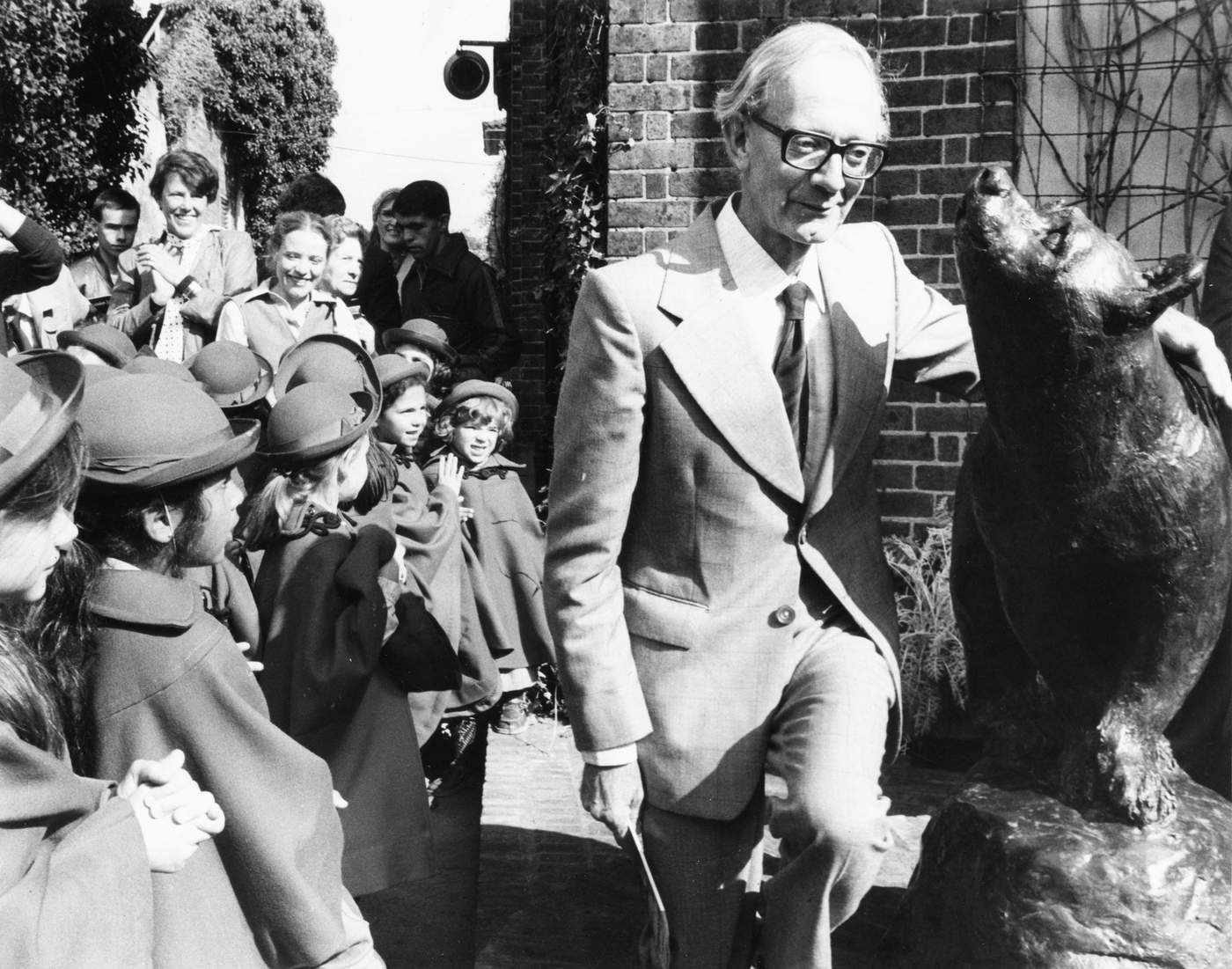 Christopher Robin Milne unveils a statue of a bear, in honor of his father at London Zoo in September 1981. Keystone/Hulton Archive/Getty Images
His biographers attribute their popularity to the idealised child-space he created in the Hundred Acre Wood, the perfect antidote to a world scarred by war.
Lindsay, however, believes part of Pooh’s success is that the characters are based on real people (or in Winnie’s case, a real bear).
Piglet was inspired by Milne’s childhood friend Veronica Rushworth-Lund, and Kanga, the doting mother of Roo, by Christopher’s Robin’s nanny, Olive.
As a child Lindsay adored hearing the story of Winnie, who lived at London Zoo until her death in 1934. In 2011, when she fell pregnant, she resolved to write a children's book about her great-grandfather's amazing bear. 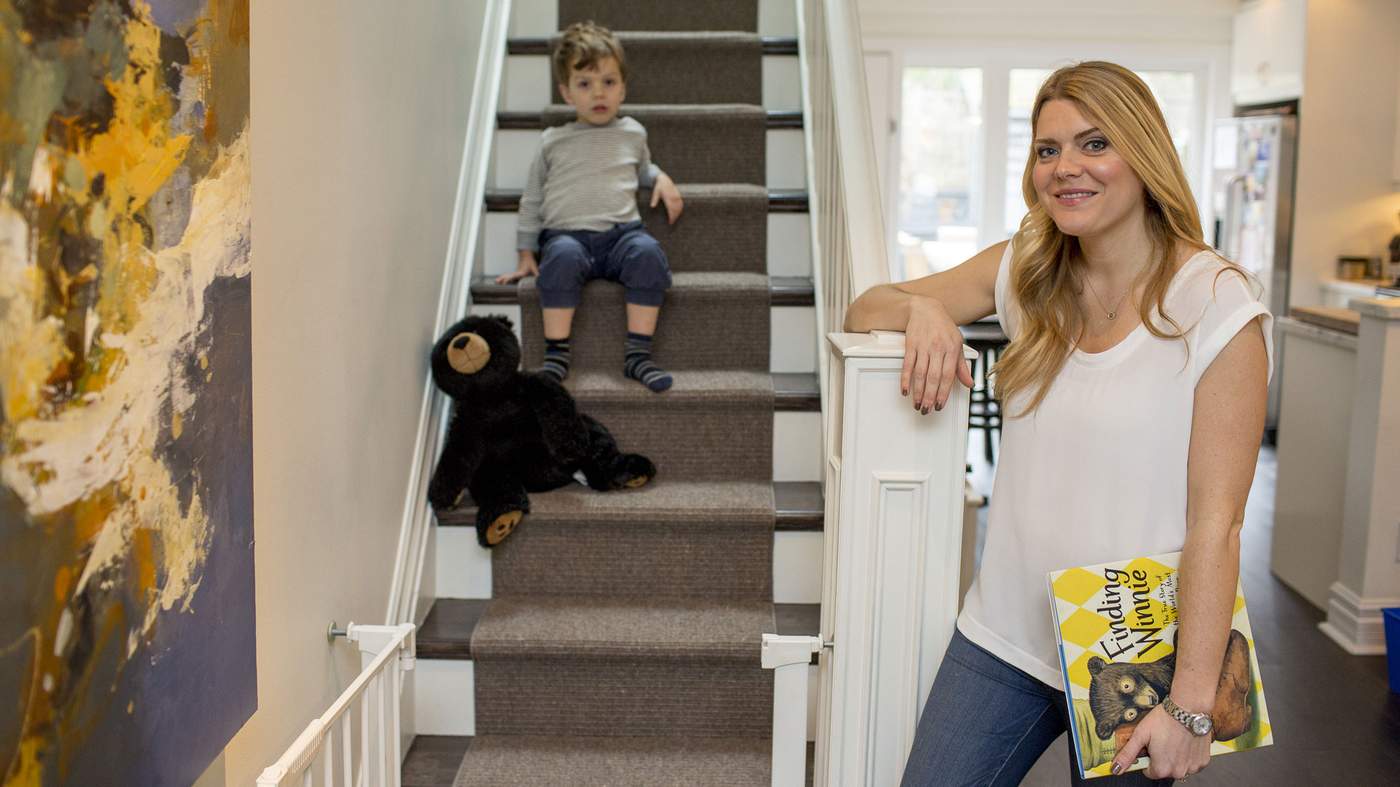 Lindsay believes Winnie's story has entered yet another new phase.  C.Farquharson
Finding Winnie, published last month, is dedicated to Cole.
She admits that so far Cole, who she named after Harry Colebourn, has showed a disappointing lack of interest in Winnie the Pooh.
“He’s a little young - he’s more interested in super heroes,” she says. Unlike Christopher Robin however, who was ribbed at school for his part in the Pooh books and spent much of his life trying to shake off the persona his father had created, she hopes Cole will be proud of his connection to the story.
“How often do you have a link to the birth of something that became huge?” she asks.
When the CEO of Canada’s largest museum contacted Lindsay a couple of years ago, however, to ask if she knew what had happened to Winnie’s remains, even she wondered if the story was being pushed too far.
Linday's book, Finding Winnie, pays tribute to her great-grandfather's amazing bear 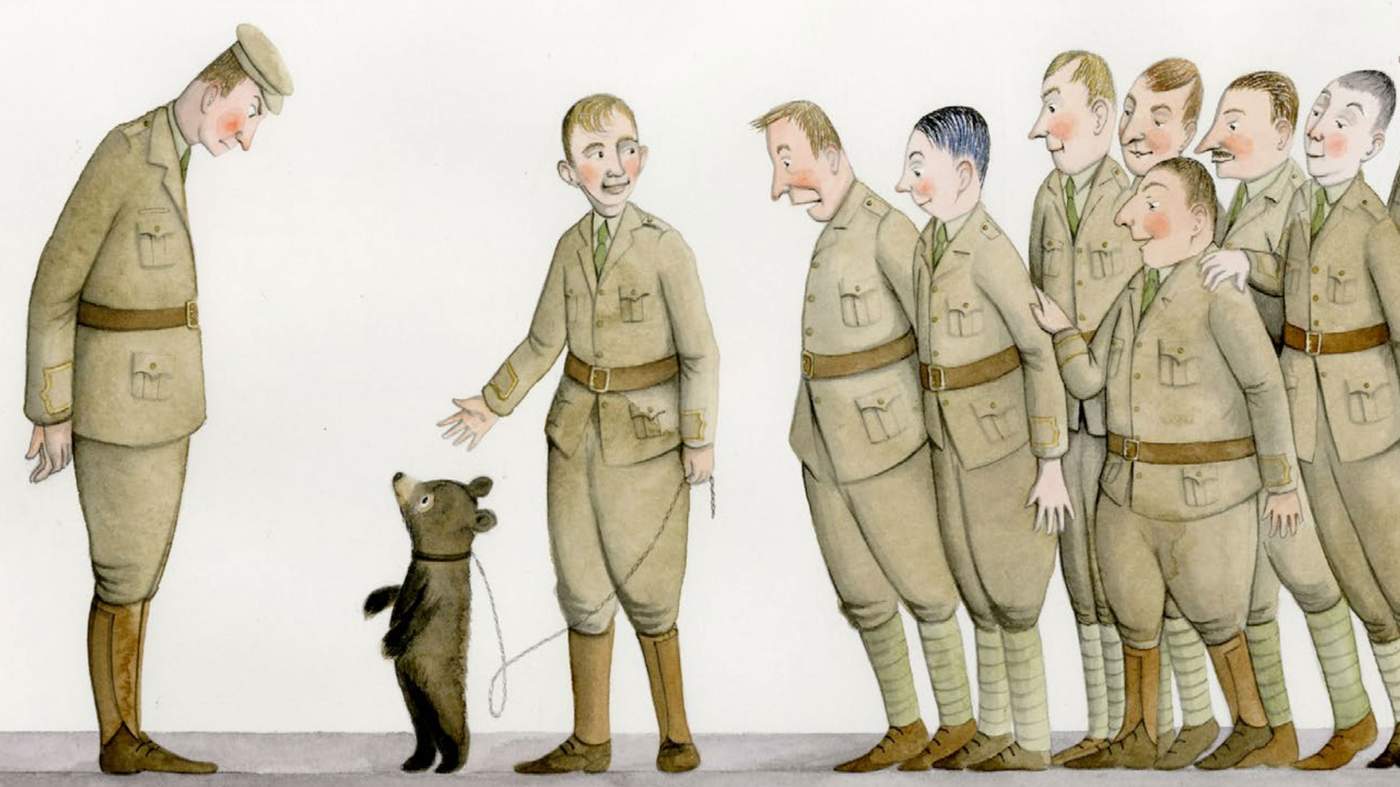 But when Winnie’s skull turned up this year at the Royal College of Surgeons, where it had been stored since her death, and subsequently went on display this November at the Hunterian Museum in London, she changed her mind.
“Her story has entered yet another new phase,” she says. “I’m amazed that she’s lasted as long as the fictional character.”
Although the skull was stored with around 11,000 other animal remains, there was apparently no question as to whose it was: an examination of the skull by paleontologists revealed catastrophic tooth decay.
As AA Milne wrote: “It all comes of liking honey so much.”
Header image courtesy of National Portrait Gallery
Finding Winnie by Lindsay Mattick (Orchard Books) is available for £10.99 plus p&p. To order: 0844 871 1514; books.telegraph.co.uk
Find more features at Telegraph.co.uk/in-depth
Posted by Baldwin Templeton at 2:02 PM