The Anti-Tesla Gets No Love by eric

It’s interesting that the car That Makes Sense – economically and functionally – gets almost no press while cars that don’t (like the Tesla and other electric cars) do. 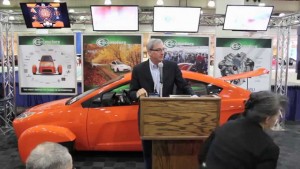 Elio Motors (company web site here) had a near-production-ready car on on display at the New York Auto Show last week. Company founder Paul Elio gave a presentation to reporters and took questions.
Bet you didn’t hear a thing about it.
This is downright Weird.
You’d think the media would be champing at the bit to let the public know that there is a car on the verge of production (with 41,000 of them already spoken for via cash-down reservations) that – according to Paul Elio – will cost well under $10,000 (under $8,000 is the target) and go well over 80 miles on a gallon of gasoline.
Ah, but it’s not electric – and so the Elio gets no love (much less coverage) from the media. 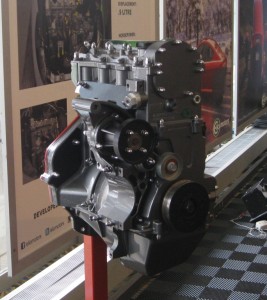 Electric cars (and other such cars) do because they lack the thing the media finds abhorrent – an internal combustion engine.
As long as it has batteries or fuel cells or solar panels or some other form of motive power – no matter how functionally impaired or expensive these may be –  the media will spasm on the floor in ecstasy like a labrador retriever pup with a new chew toy. They will write stories more like love sonnets about the magnificence of whatever it is, provided it doesn’t use “old” and “dirty” technology.


That is, burn gas.
Well, the Elio does – but very little.
It is powered by a 900 cc three cylinder engine – about the same size as a typical motorcycle’s engine. Which is possible because the Elio weighs not much more than a motorcycle (about 1,250 pounds) and that is what makes 80-plus MPG possible.
Now, ponder that.
A car that can go 80-plus miles on a gallon of fuel is using very little fuel. The less fuel burned, the less exhaust produced and – here it comes! – the lower the emissions. The Elio’s emissions (it will comply with all of Uncle’s requirements) will be a fraction of those produced by any other currently available car simply by dint of the fact that it has a tiny engine that burns a fraction of the fuel.
No Magic (or elaborate/expensive technology) necessary.

Just simplicity – and light weight.
Which the media apparently doesn’t find attractive and therefore not worth reporting.
Meanwhile, endless fawning over the Tesla – the rich man’s toy subsidized by the working and middle class taxpayers who can look but never touch. They are fleeced by Uncle, so that Elon Musk – the Crony Capitalist King – can manufacturer $40,000-to-start (and from there to six figures) electric cars that are certainly sexy and Ferrari quick but which make as much sense as transportation as a thong does as clothing.
In Antarctica.
You have to be affluent – rich – to even contemplate the purchase (heavily subsidized by Uncle) of a Telsa. In which case, consideration of economy are an irrelevance. And if economy is irrelevant, what is the justification? Sexiness? Speed? Well, why not pay the rich to purchase Porsches, too?
Ah, but the Tesla is electric – and “zero emissions.” 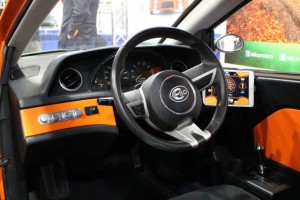 Well, yes – it is electric. But “zero emissions”?
Sure, as far as the tailpipe (which, being electric, it hasn’t got). But electricity does not spontaneously appear out of the Void. It must be generated – and that requires (well, mostly involves) the burning of coal and oil, which produces emissions …  just elsewhere.
Probably, more of them than the little Elio produces.
Certainly, this will be the case once the cars are mass-produced. Because people – not just rich people – will be able to afford the Elio.
Lots of people.
Unless Musk can reduce the cost of his Toy by at least 50 percent, it will never be other than a low-production rich man’s indulgence. But the Elio will cost about 50 percent less than a current economy car.
Almost anyone will be able to afford it.
And the cost to operate it will be next to nil. Not just because it burns very little fuel but because it will cost very little to insure. 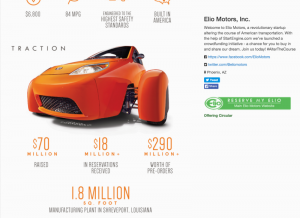 Elio Vice President of Sales Jerome Vassallo told the media at the NY Auto Show the company is hoping to have the Elio classified by the government as an Autocycle. This is a regulatory class different from conventional cars (with four wheels) but also different from motorcycles (which have two). The Elio (a three-wheeler) will have air bags (bikes generally don’t) and will meet a very high standard of crashworthiness, Vassal said. It will have a reinforced (and of course, enclosed) cabin with an integrated roll cage and these things alone will make it much superior in terms of occupant safety than a motorcycle (usually cheap to insure unless it’s a high-performance sport bike) and comparable to or even better than a current subcompact car.
The cost to insure a Tesla is … higher.
A lot higher.
Because insurance is based at least as much on the cost to replace the thing – in the event of a major crash that totals it – as it is on how “safe” it is in the event of crash. If someone totals a Tesla, their insurance company is looking at cutting a check for $40k or so.
This fact is reflected in the premiums. 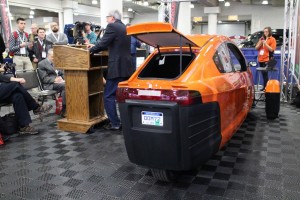 The Elio would cost $8k or so to replace. This fact will also be reflected in the cost of its premiums.
A full coverage policy for a new $10k motorcycle (other than a high performance sport bike) is typically $250 or so a year – about a third (or less) what it costs to buy a comprehensive coverage policy for a $40,000 entry-luxury car (which is what the least expensive Tesla is by definition).
Probably, a person would pay more to insure an entry-level Tesla over eight years than one would spend to buy an entire Elio.
This will probably appeal to people.
Well, how about maintenance? The electric Tesla requires no oil changes, no periodic tune-ups or valvetrain maintenance while the Elio – which has an IC engine – will require some of those things. 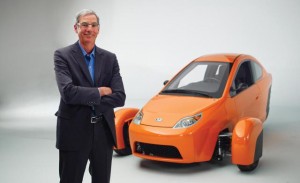 True.
But the Elio has just a small 12V battery that costs about $100 to replace every five years or so (like any other car) while the Tesla has a battery pack that will cost thousands to replace when the time eventually comes. The Tesla’s battery pack alone costs nearly much as the Elio itself.
But all these practical (and economic) considerations don’t seem to get the Elio much traction – with the media. Even the automotive media has been largely silent.
Except, mostly, me.
But I’ve been excommunicated from the mainstream media because I refused the Kool Aid, do not sing sonnets of Tesla. I despise Elon Musk and have said so, in print. The mainstream media hides its bias.
I am open about mine.
EPautos.com depends on you to keep the wheels turning! The control freaks (Clovers) hate us. Goo-guhl blackballed us.
Will you help us?
Our donate button is here.
If you prefer not to use PayPal, our mailing address is:
EPautos
721 Hummingbird Lane SE
Copper Hill, VA 24079
PS: EPautos stickers – new design, larger and magnetic! – are free to those who send in $10 or more to support the site. Please be sure to tell us you want one – and also, provide a mailing address, so we can get the thing to you!

Posted by Baldwin Templeton at 3:56 AM