Aspartame and Shame by Dr. Mercola

The artificial sweetener aspartame is used in more than 6,000 products worldwide, including Diet Coke products. It used to be part of Diet Pepsi, too, until the company swapped out it out for another artificial sweetener (a Splenda blend) in response to consumer demand.
Senior vice president of Pepsi's flavors unit, Seth Kaufman, noted, "Diet cola drinkers in the U.S. told us they wanted aspartame-free Diet Pepsi."1 The move was an attempt by Pepsi to grab a corner of the market it currently misses — health-conscious consumers.

Is PepsiCo Embracing a New Healthier Side?

The move to take aspartame out of Diet Pepsi is only one of Pepsi's recent "healthy" moves. They also announced plans for several thousand "Hello Goodness" vending machines in 2016, which replace the standard soda, candy and chips with healthier options like hummus cups.
Also in the works for 2016 are an organic Gatorade formulation and, ironically, a non-GMO labeled line of Tropicana juices.
The latter is ironic because Pepsi spent nearly $10 million in lobbying efforts from 2013 to 2015 to defeat legislation calling for mandatory state and federal labeling of products containing GMO ingredients.2
In fact, only five organizations spent more to defeat the measures than Pepsi. Pepsi spent even more than Monsanto! As reported by The Motley Fool:3

"Pepsi, along with fellow beverage Goliath Coca-Cola, turns out to be one of the very highest spenders in persuading the government to forego the labeling of GMO ingredients.
Introducing products that seek to tap into consumer demand for non-GMO ingredients, while actively attempting to thwart labeling policy with the brute force of millions of dollars, invites the criticism that Pepsi is greenwashing its image.
That is, the company may be cynically donning a guise of social consciousness while profiting from positions its target customers find abhorrent.
If you carry this reasoning further, the economic impact of a few thousand machines selling healthy snack and beverage items to Pepsi is infinitesimal in comparison to the billions the company reaps from sodas and snacks like Doritos, which are often popularly labeled as junk food."

Why Are Americans Becoming Wary of Aspartame?

As more research links aspartame to health risks, increasing numbers of people are looking to avoid it in their diets. That's why Pepsi was proactive in removing it from their diet soda.
The U.S. Food and Drug Administration (FDA) approved aspartame for use in dry foods in 1981 and as a general artificial sweetener in 1996.
Unlike other artificial sweeteners that move through the body without being digested, aspartame can be metabolized by your body and exerts a number of concerning effects.
For instance, aspartame has been found to increase hunger ratings compared to glucose or water and is associated with heightened motivation to eat (even more so than other artificial sweeteners like saccharin or acesulfame potassium).4
For a substance often used in "diet" products, the fact that aspartame may actually increase weight gain is incredibly misleading. Aspartame also exerts changes on the microbial composition in your gut, the consequences of which are unknown.
However, emerging evidence suggests gut microbes play a role in metabolic diseases that aspartame is known to increase, pointing to alteration of gut microbial composition as one of its mechanisms of harm. According to research published in PLOS One:5


"Regular consumption of artificially sweetened soft drinks is associated with disorders of the metabolic syndrome, including abdominal obesity, insulin resistance and/or impaired glucose tolerance, dyslipidemia and high blood pressure.
In particular, daily diet soda consumption (primarily sweetened with N-a-L-aspartyl-L-phenylalanine methyl ester, aspartame, APM), is reported to increase the relative risk of type 2 diabetes and the metabolic syndrome by 67 percent and 36 percent respectively.
Given this data, and the presence of APM in over 6000 food products, there is a need to understand the potential role of APM sweetened products in the development and maintenance of metabolic disease."

A 2004 BMJ study gave aspartame a clean bill of health, in part because it noted 100 percent of industry-funded studies concluded aspartame is safe.6
Yet, in an editorial response published in BMJ in 2005, it's revealed that 92 percent of independently funded studies found aspartame may cause adverse effects, including depression and headaches.7
A recent study also found the administration of aspartame to rats resulted in detectable methanol even after 24 hours, which might be responsible for inducing oxidative stress in the brain.8
Aspartame is made up of aspartic acid and phenylalanine. But the phenylalanine has been synthetically modified to carry a methyl group as that provides the majority of the sweetness.
That phenylalanine methyl bond, called a methyl ester, is very weak, which allows the methyl group on the phenylalanine to easily break off and form methanol.
When aspartame is in liquid form, it breaks down into methyl alcohol, or methanol, which is then converted into formaldehyde and represents the root of the problem with aspartame.

Why Aspartame May Be Toxic

Both animals and humans have small structures called peroxisomes in each cell. There are a couple of hundred in every cell of your body, which are designed to detoxify a variety of chemicals.
Peroxisome contains catalase, which helps detoxify methanol once it is turned into formaldehyde. Other chemicals in the peroxisome then convert the formaldehyde to formic acid, which is harmless, but this last step occurs only in non-human animals.
When methanol enters the peroxisome of every animal except humans, it gets into that mechanism. Humans do have the same number of peroxisomes in comparable cells as animals, but human peroxisomes cannot convert the toxic formaldehyde into harmless formic acid.
According to Dr. Woody Monte, professor emeritus at Arizona State University in food and chemistry:


"The methanol bounces off the catalase or bounces off something there. What happens then is every cell in your body cannot metabolize methanol. Wherein the animal body, every cell can metabolize and turn it to formic acid, which is safe. What happens to the methyl alcohol?
That's the key. In humans, methyl alcohol could just as easily not be metabolized at all. That would be the ultimate and best outcome, and you could urinate it away or sweat it out and you would be fine.
Unfortunately, there are some locations in the human body, particularly in the lining of the vessels of your body, especially in your brain, that are loaded with alcohol dehydrogenase (ADH) that converts methanol to formaldehyde …
… [A]nd there is no catalase present so enormous amounts of damage are created in the tissues."

How Aspartame May Harm Your Brain and More

So to recap, in humans the methyl alcohol from aspartame travels through your blood vessels into sensitive areas, such as your brain, that is loaded with ADH, which converts methanol to formaldehyde. And since there's no catalase present, the formaldehyde is free to cause enormous damage in your tissues.
Symptoms from methanol poisoning are many, and include headaches, ear buzzing, dizziness, nausea, gastrointestinal disturbances, weakness, vertigo, chills, memory lapses, numbness and shooting pains in the extremities, behavioral disturbances, and neuritis.
The most well-known problems from methanol poisoning are vision problems including misty vision, progressive contraction of visual fields, blurring of vision, obscuration of vision, retinal damage, and blindness. Formaldehyde is a known carcinogen that causes retinal damage, interferes with DNA replication and may cause birth defects.
Not surprisingly, the most comprehensive and longest human study looking at aspartame toxicity found a clear association between aspartame consumption and non-Hodgkin's Lymphoma and leukemia. Aspartame appears to exert a number of additional neurological effects as well.
One study was designed to ascertain whether individuals with mood disorders are particularly vulnerable to the adverse effects of aspartame. It turned out the study had to be stopped by the Institutional Review Board mid-way through because of the severity of reactions in people with a history of depression.
The researcher concluded, "individuals with mood disorders are particularly sensitive to this artificial sweetener and its use in this population should be discouraged."9

The Direct and Indirect Effects of Aspartame on Your Brain

Another study looked into the direct and indirect cellular effects of aspartame on the brain, noting that phenylalanine, which makes up 50 percent of aspartame, plays an important role in neurotransmitter regulation. Aspartic acid, which makes up 40 percent of the artificial sweetener, is also thought to play a role as an excitatory neurotransmitter in the central nervous system. According to the study:10


" … [I]t has been reported that consumption of aspartame could cause neurological and behavioral disturbances in sensitive individuals. Headaches, insomnia and seizures are also some of the neurological effects that have been encountered, and these may be accredited to changes in regional brain concentrations of catecholamines, which include norepinephrine, epinephrine and dopamine.
… [W]e propose that excessive aspartame ingestion might be involved in the pathogenesis of certain mental disorders (DSM-IV-TR 2000) and also in compromised learning and emotional functioning."

Aspartame may even affect your serotonin levels, which may not only play a role in its link to depression but also in other health conditions, like low libido.11 In all, there are more than 50 health conditions associated with aspartame, from kidney problems and cognitive dysfunction to DNA damage and mental disorders.12 Despite this, major food and beverage manufacturers, like Coca-Cola, continue to use it in their products. 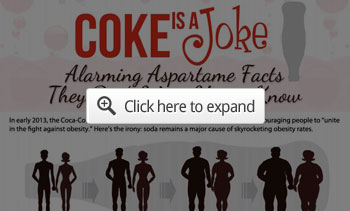 Are You Stuck on Artificial Sweeteners?

If you're having a hard time giving up artificial sweeteners (they can be just as addictive as other sugars), I suggest trying the Emotional Freedom Techniques (EFT). More than any traditional or alternative method I have used or researched, EFT works to overcome food cravings.
If diet soda is the culprit for you, be sure to check out Turbo Tapping, which is an extremely effective and simple tool to get rid of your soda addiction in a short amount of time. The video below with EFT practitioner Julie Schiffman also demonstrates how to use EFT to fight food cravings of all kinds.

If you still have cravings after trying EFT or Turbo Tapping, you may need to make additional changes to your diet. My free nutrition plan can help you do this in a step-by-step fashion. As for a safer sweetener option, you could use stevia or Luo Han, both of which are safe natural sweeteners.
However, if you struggle with high blood pressure, high cholesterol, diabetes, or extra weight, then you have insulin sensitivity issues and would likely benefit from avoiding all sweeteners, including stevia and Luo Han.
Last but not least, if you experience side effects from aspartame or any other artificial sweetener, please report it to the FDA (if you live in the U.S.) without delay. It's easy to make a report — just go to the FDA Consumer Complaint Coordinator page, find the phone number for your state and make a call reporting your reaction.

[+] Sources and References
Posted by Baldwin Templeton at 3:46 PM