Climate Engineering And Polar Meltdown, How Long Has It Been Going On? By Dane Wigington Global Research,

Climate Engineering And Polar Meltdown, How Long Has It Been Going On? I recently posted a historical copy of “Popular Science” from June of 1958, which contained a feature article warning about the use of “Weather As A Weapon”. There were a number of important informational declarations made that warrant critical clarification and investigation.


“Control of Earth’s weather and temperature is within the realm of practicability now” says Dr. Joseph Kaplan, chairman of the International Geophysical Year.

…present knowledge lists seven possible ways of changing weather on a global scale………..All of these methods would regulate the distribution of heat in different parts of the Earth’s atmosphere. This is the basis of global weather control.

The next excerpt from the Popular Science publication is extremely important to consider.


Air Force scientists are already experimenting with sodium vapor , ejected from jet planes, to intercept solar radiation (solar radiation management). Other gases would admit solar radiation but trap heat reflected back from earth. The last half-century, during which we have burned huge amounts of fossil fuels, has shown what an increase in atmospheric carbon dioxide can do. The amount spewed from chimneys and automobiles has created a so called “greenhouse effect,” which has raised Earth’s temperature by an estimated two degrees Fahrenheit—- a significant rise.

This so-far accidental result (rapid warming of Earth) is already serious, and we must find a means to counteract it. Melting polar ice will make ocean levels rise at least 40 feet, and inundate vast areas in the next 50 or 60 years unless atmospheric temperatures are controlled.

Again, it is important to understand who Kaplan was, the chairman of the “International Geophysical Year”, an exceptionally important event that gathered scientists from around the world to discuss the state of the planet.
The  global geoengineering card was played many decades ago. The campaign of total deception to hide this fact has been carried out for many decades. The whole of the climate science and meteorological communities can only be put in one of two categories. They are either lying to a degree that cannot be truly comprehended, or they are criminally ignorant to a degree that cannot be truly comprehended. Certainly we must consider that many in the science community are being threatened into silence or into lying, others are being muzzled with federal “gag” orders. Those in power (and the military/industrial complex they control) have long since known the planet was rapidly heating due to anthropogenic activities. Gases that enter the atmosphere stay there, they don’t just float off into outer space as some seem to have chosen to believe. The historical photographs below show the already profound early signs of Arctic warming and polar meltdown as far back as 1959. 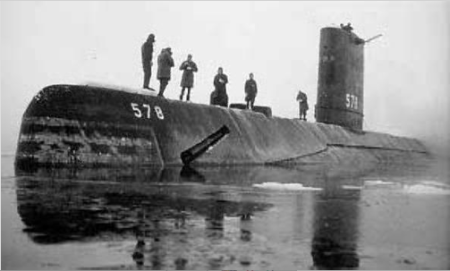 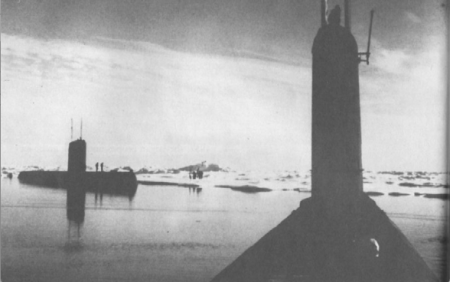 Two US submarines surfaced at the North Pole in August, 1962 (NavSource naval history)
Greenhouse gases have an impact on Earth’s energy balance, there is no other possible outcome. There is (and had been) an ongoing toxic tug of war between atmospheric aerosols and the buildup of greenhouse gases. This fact is scientifically undisputed. The current rate of planetary warming is equal to the thermal energy of 4 Hiroshima atomic bombs per second, or 400,000 a day. In order to keep the military industrial complex juggernaut of insanity rolling forward, and to keep the myth of perpetual expansion on a finite planet going, those in power long ago unleashed the climate engineering insanity without the knowledge or consent of the people. Examine the graph below carefully. Note that the protracted warming of the planet hit a profound peak in the mid 1940s. Unexplainably, it then declined radically and leveled out until the mid 70s. Many sources now admit this cooling was due to atmospheric aerosols, though no mainstream source will admit to geoengineering as the primary source of the aerosols. 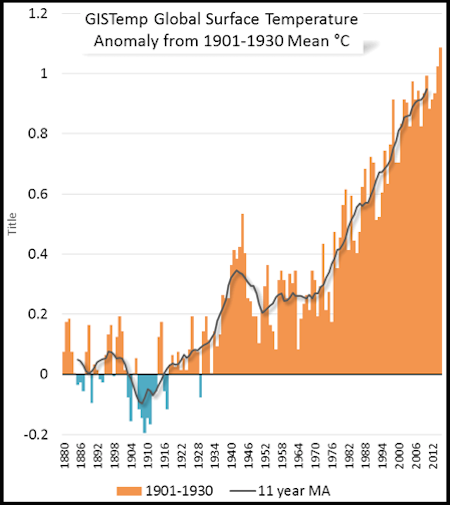 The post WWll comencement of climate engineering is clearly visible on global temperature graphs.
The power structure deployed the first large scale geoengineering efforts immediately after WWll. Massive historical congressional reports and presidential reports prove climate engineering has been conducted since the mid 1940s. The warming of the planet was temporarily slowed (till the mid 70s) due to the short term cooling effect of injecting of aerosols into the atmosphere (as mentioned earlier in this article). The toxic battle between the buildup of greenhouse gases and the loading of the atmosphere with light scattering particles was underway. 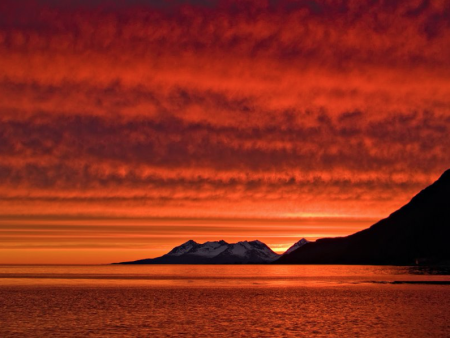 Arctic sky, photo credit: Thomas Laupstad
The poles were an initial target for heavy spraying, likely for a number of reasons. These remote locations are out of sight and out of mind, and are also the temperature regulators for the planet. An unusual and unexpected “Arctic haze” was first reported as early as the 1950s, though the true primary source of this haze was not admitted to. The cooling of the Arctic was initially profound, until the catastrophic consequences of climate engineering began to manifest. 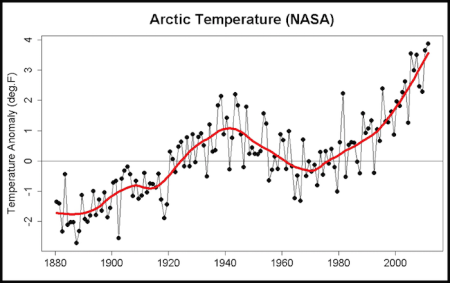 The graph above clearly reflects the anomalous downturn in Arctic temperatures that occurred in the initial three decades after climate engineering was commenced.
As the continued greenhouse gas buildup and ozone destruction effects began to overwhelm the cooling effect of the highly toxic geoenginering aerosols, Earth again began to warm rapidly, especially in the Arctic circle. Arctic sea temperatures are now the warmest on record. This factor is causing formerly frozen methane deposits to thaw and release, furthering the buildup of greenhouse gasses (this is one of many unfolding feedback loops that have now been triggered). Arctic ice extent hit record low levels in 2015. The geoengineers have continually increased the scope and scale of the ongoing aerosol spraying in a catastrophic attempt to compensate. The climate engineering creed is to relentlessly ”double down” and thus they are plowing forward with their expanding course of planetary decimation to this day. The length the climate engineers are now going to in their attempt to retain what is left of the Arctic sea can only be categorized as unimaginably desperate and completely destructive to the biosphere overall. 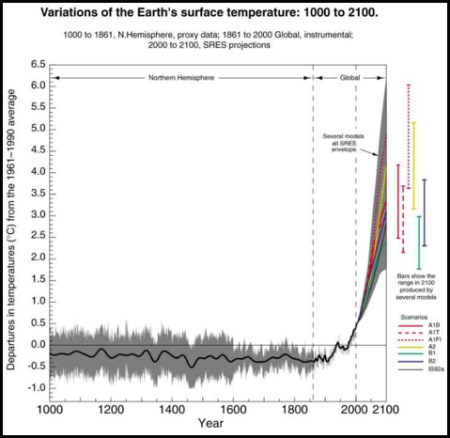 Global temperatures have gone exponentially upward. The slight downturn in global temperatures that occurred during the first three decades of geoengineering is also visible in this graph.
Climate engineering has been wreaking havoc around the globe for over six decades with countless, unimaginable, and irreparable consequences. These include a shredded ozone layer, a completely disrupted hydrological cycle, and the total contamination of our once thriving planet. The ongoing programs have been (and are) a primary weapon for the controlling of countries and populations around the globe.
All of us have been forced to be test subjects in greatest and most lethal experiment ever conducted by the human race. If this experiment is allowed to continue, near term total global extinction is a mathematical certainty. Industrialized/militarized society is collapsing and as a whole has all but sealed our collective fate. Earth’s climate and life support systems are unraveling by the day.  Global climate engineering is the epitome of the industrialized/militarized destruction of our planet. All are needed in the desperate fight to expose and halt the ongoing geoengineering insanity, make your voice heard. DW

Posted by Baldwin Templeton at 4:06 AM