Vitamin D deficiency has been linked to a wide variety of health problems and diseases, and widespread vitamin D deficiency may also play a role in the United States' abysmal maternal health rating. It has been estimated that if vitamin D levels were raised among the general population, it could prevent chronic diseases that claim nearly one million lives throughout the world each year.
According to the 2015 Save the Children report1 on the health of mothers around the world, the U.S. ranks worst among developed countries.
Shockingly, pregnant American women face a one in 1,800 risk of dying from pregnancy-related complications — a 10 times higher risk than that of women in Poland and Austria, for example.
When all countries of the world are included, the U.S. ranks 33 out of 179, down two spots from 2014. Raising vitamin D levels among pregnant women may curb this trend, and help protect not only the life and health of the mother, but also her child.
If you're pregnant, planning a pregnancy, or know anyone planning a family, the following information is crucial, and I encourage you to share it widely.

Vitamin D Is Crucial for Mother and Child

In the U.S., premature births have risen 36 percent over the past 25 years. Each year, more than half a million preemies are now born in the U.S., and it's the number one killer of newborns.
Research shows that vitamin D optimization could likely prevent half of these premature births. Among African-American and Hispanic populations, as much as 70 to 75 percent of all preterm births might be prevented.
Similar findings have been documented among twin births, which tend to have a higher risk for preterm birth. A 2013 study2 found that women carrying twins who had a minimum vitamin D level of 30 ng/ml (75 nmol/L) in their late second trimester had a 60 percent reduction in preterm births.
Previous research3 has also shown that women with a vitamin D level of 40 ng/ml have a 25 percent reduction in infections, particularly respiratory infections such as colds and flu, as well as fewer infections of the vagina and the gums.
Comorbidities of pregnancy were also reduced by 30 percent in the women who achieved 40 ng/ml, including diabetes, high blood pressure, and pre-eclampsia – a potentially deadly increase in blood pressure and fluid accompanied by low platelets.
A mother's vitamin D status during pregnancy can also have lifelong ramifications for her child. Vitamin D deficiency in pregnancy has been linked to childhood allergies, asthma,4,5 colds and flu, dental cavities, diabetes, and even strokes and cardiovascular disease in later life of the child.6,7

According to the most recent paper,8 produced by researchers from GrassrootsHealth and the Medical University of South Carolina, women with vitamin D levels of 40 to 60 ng/ml have a 46 percent lower preterm birth rate than the general population.
Women with a vitamin D level at or above 40 ng/ml by their third trimester had a 59 percent lower risk for premature birth than those with levels below 20 ng/ml. Moreover, as noted in a press release:9


"Another key finding was a steady increase of gestation time (how long the baby stayed in the womb) correlating to the rise of vitamin D up to around 40 ng/ml where it reached a plateau.10
The March of Dimes estimates that the annual cost of preterm births in the United States as $12 billion (for 455,918 children).
If approximately 50 percent of preterm births could be prevented in the general population, as this analysis suggests is possible, there could be $6 billion available for other services and, more than 225,000 children and families spared this trauma." [Emphasis mine] 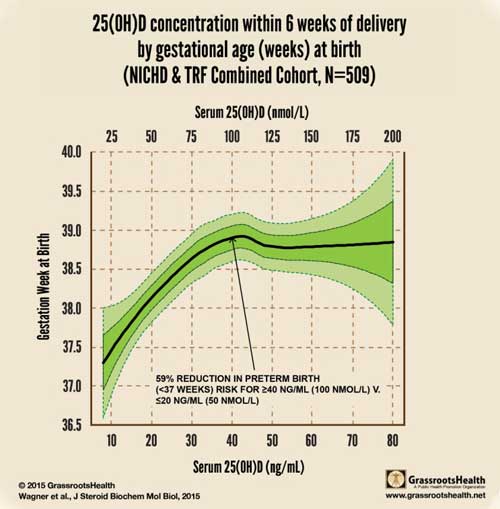 As a result of these findings, the Medical University of South Carolina (MUSC) has updated its standard of care for prenatal patients to include vitamin D testing, and if necessary, vitamin D3 supplementation.
Pregnant women are typically given 4,000 IU of vitamin D3 per day to start, with the aim of getting their serum levels to at least 40 ng/ml by their third trimester. According to Dr. Roger Newman,11 Director of Women's Health Research at MUSC:


"We have been aware of the vitamin D deficiency state in the vast majority of our Caucasian patients and almost all our Black patients for far too long. Now the evidence has accumulated of the high price we pay in terms of prematurity and other obstetrical complications from our failure to systemically address these deficiencies in maternal vitamin D levels. It is time to change, to get ahead of the curve."


"We applaud the Medical University of South Carolina for taking action to implement both the ethical and practical vitamin D methodology – they lead the way with moving research into practice through this Protect our Children NOW! project. Other medical centers are already on board to implement the new standard of care."


I join Carole in applauding MUSC for taking the lead on this issue. They're the first in the nation to take proactive steps to improve the health and safety of pregnant women and their babies by adding vitamin D testing and supplementation into their standard practice for ALL pregnant patients.
They're not waiting years for the approval of various institutional bodies and oversight groups. Rather, they've reviewed the evidence, found it to be solid, and are moving forward in the best interest of women and children, and for that, they deserve some serious accolades.
At this point, there's little doubt that maintaining a vitamin D level of 40 to 60 ng/ml during pregnancy is one of the most important things you can do, both for your own health and for the health of your child. The science is done. Now it just needs to be put into practice. I cannot think of any other measure that can reduce pregnancy complications, deaths, and future health problems for less money, and be as safe and risk-free.
So please, if you're pregnant, make sure to get your 25-hydroxy D levels checked. Research indicates that 50 percent of women can achieve a level of 40 ng/ml with 4,000 IUs of vitamin D3 per day during pregnancy, and 6,400 IUs for nursing mothers. Regular testing is important to see what your level is so you can adjust your dosage to fit your body's requirements. The NOAEL (No observed adverse effect level) specified by the Institute of Medicine is 10,000 IU/day.12
The actual dose required to achieve the 40 ng/ml level should be below that.

How to Enroll in Protect Our Children NOW!

Physicians across the nation are encouraged to enroll their pregnant patients in the Protect Our Children NOW! project, which seeks to resolve vitamin D deficiency among pregnant women and children, and raise global awareness about the health risks associated with vitamin D deficiency. The project was initiated by Carole Baggerly of GrassrootsHealth,13 which has a panel of 42 vitamin D researchers that provide scientific advice.
The project seeks to engage women in "a value changing project of Good Health vs. Treating Illness." In other words, optimizing your vitamin D status helps improve your health and prevent disease, which is a lot easier and less expensive than waiting for something to go wrong and then trying to treat the problem.
If you are 12 to 17 weeks pregnant, at least 18 years of age, and currently reside in the U.S., you may enroll in this fully sponsored project at no cost to you. Participation in the program includes:

Vitamin D — A Simple, Inexpensive Way to Improve Your Health

The science is quite clear: To protect yourself and your child from pregnancy complications, you need to maintain a vitamin D level of 40 to 60 ng/ml. According to the featured study, the "magic number" is 40 ng/ml, after with the benefits plateau. I strongly suggest taking this information to heart, and to share it with anyone that might benefit. Optimizing your vitamin D is one of the easiest and least expensive ways to reduce your risk of complications and premature birth.
Ideally, you'd want to optimize your levels before getting pregnant, but if this is news to you, and you're already pregnant, do make sure to get tested, and take steps to optimize your levels accordingly. The vitamin D test you're looking for is called 25(OH)D or 25-hydroxyvitamin D.
This is the officially recognized marker of overall D status, and is most strongly associated with overall health. The other vitamin D test available, called 1,25-dihydroxy vitamin D (1,25(OH)D), is not very useful for determining vitamin D sufficiency.
While sunlight is the ideal way to optimize your vitamin D, winter and work prevent more than 90 percent of those reading this article from achieving ideal levels without supplementation. Just remember to also increase your vitamin K2 intake, either from food or supplements.
The Medical University of South Carolina starts their prenatal patients on 4,000 IU of vitamin D3 per day. Regular testing helps determine whether this dose is sufficient, or how much more you might need to reach a serum level of at least 40 ng/ml by your third trimester.
Last but not least, please consider making a donation to the Protect Our Children NOW! project, to help keep this critical program going.

[+] Sources and References
Posted by Baldwin Templeton at 1:16 PM