NATO Hopes for A “Russian Invasion” of Ukraine By Tony Cartalucci Global Research,

NATO Hopes for A “Russian Invasion” of Ukraine

In the minds of many following along with the Western narrative regarding the ongoing conflict in Ukraine, the Russians have already “invaded.” Despite paradoxical claims of nuclear-armed Russia “invading” eastern Ukraine but with Kiev’s battered, disorganized troops in mismatching uniforms and without daily rations overwhelming these forces, many have chosen to believe that indeed Kiev’s inability to assert control in Ukraine’s easternmost provinces is solely because of Russian “intervention.”

The “Re-Invasion” of Ukraine? 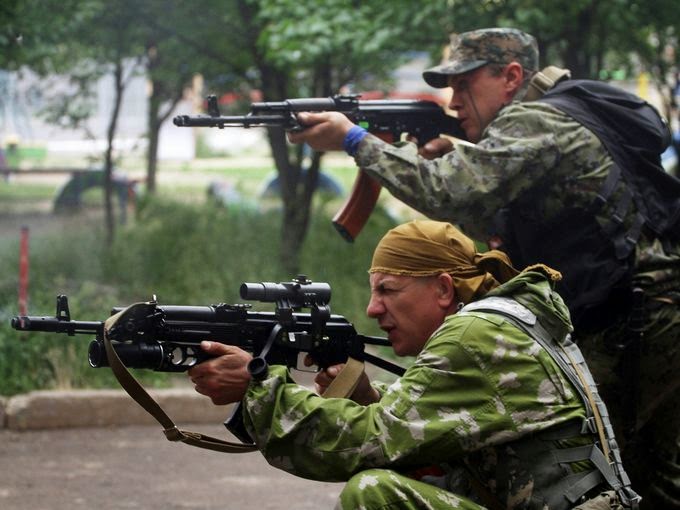 Even with the West claiming Russia has already “invaded” Ukraine, at each juncture of the ongoing conflict, an “impending Russian invasion of Ukraine” is held up to once again terrify and incense Western audiences – as if “another invasion” is about to take place – a “re-invasion” perhaps.The Business Insider in a July 6, 2014 article titled, “Russia Has Effectively Invaded Eastern Ukraine — The Question Is How The West Will Respond,” claimed (emphasis added):

For his part, Mr Putin appears, at least for now, to have ruled out a full-frontal invasion. On June 24th he theatrically instructed the ever-loyal upper house of parliament to cancel the authorisation for military force in Ukraine that he had ordered up in early March. The move was largely an empty fob to Mr Poroshenko and another way to ward off more Western sanctions. Yet even if a tanks-and-soldiers invasion seems unlikely, a Russian invasion of another sort began long ago: one that resembles the slippery, post-modern war …

With Kiev’s military campaign against fellow Ukrainians to the east faring poorly, an actual Russian invasion of Ukraine would only benefit them and their backers in both the European Union and collaborating states within NATO. Despite attempts to portray local defense fighters withdrawing from the Donetsk city of Slavyansk as a “retreat” and a “turning point” in the conflict in favor of Kiev, Kiev’s forces have continued to suffer heavy losses, most recently in Lugansk where apparently an entire tank column of between 40-70 vehicles was destroyed.
The BBC reported in its article, “Ukraine conflict: Fighting flares near city of Luhansk,” that:

Fighting has flared outside the rebel-held east Ukrainian city of Luhansk, with rebels saying government forces tried to storm the city with tanks.

Rebel military leader Igor Strelkov was quoted as saying his forces had beaten off columns of government armour attacking from the south and west.

The same article would also report:


A Ukrainian presidential source told Ukrayinska Pravda newspaper that an armoured unit was trying to relieve troops who had been blockaded for weeks at Luhansk airport.

Strelkov (the nom-de-guerre of Igor Girkin) said the rebels had beaten off two government armoured columns numbering between 40 and 70 tanks. 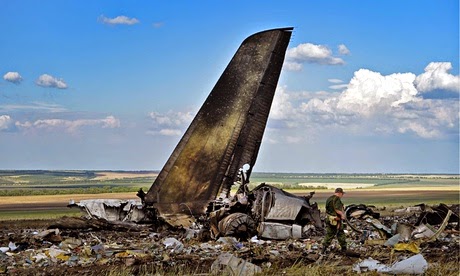 With Kiev forces encircled in Lugansk and the forces sent to relieve them apparently destroyed – a miniature Stalingrad – it would seem like Russia has little reason to “invade” Ukraine. Still the West is intent on salvaging what appears to be an increasingly ineffective Ukrainian army racking up as many civilian casualties as it is defeats on the field of battle.
The Washington Post, in the wake of Kiev’s most recent setback in Lugansk, would declare in its article, “Russia warns Ukraine of ‘irreversible consequences’ after cross-border shelling,” that:


Russia on Sunday accused Ukraine of lobbing a shell over the border and killing a Russian civilian and warned of “irreversible consequences,” in a sharp escalation of rhetoric that raised fears of a Russian invasion in Ukraine’s east.

The accusation, which Ukrainian officials denied, set off furious denunciations in Russia, with one senior legislator calling for pinpoint airstrikes on Ukrainian soil of the sort he said Israel was making in the Gaza Strip.

The use of hyperbole allegedly spoken by a single Russian legislator to stoke fears of an impending Russian invasion has been a frequently used ploy by the Western media to manipulate public perception. Quoting obscure former “officials” in Iran has been used to disingenuously portray the whole of Iranian foreign policy in a particularly unflattering light more than once. The Washington Post would also claim of the Ukrainian conflict:


Russian Foreign Minister Sergei Lavrov said last week that his nation was prepared to take all necessary steps to defend its territory — a declaration that appeared to keep open the option of outright intervention in Ukraine.

The desire by the West to portray Russia as “invading Ukraine” is rooted in the belief that it will undermine Russia’s political leverage and open the doors to more aggressive NATO support for the faltering regime in Kiev. Perceived Russian aggression might make it easier to convince NATO and EU members who have not followed suit in exacting sanctions and condemnation against Russia to begin taking a more anti-Russian stance.
Why Russia Doesn’t Need to Invade Ukraine
Whether or not Russia is already covertly supporting fighters inside of Ukraine has little impact on its unnecessary need to directly invade Ukrainian territory. If Russia is not supporting fighters inside of Ukraine, it appears then that these fighters are more than capable of miring Kiev’s forces and picking them apart through classical guerrilla warfare on their own. If Russia is already covertly supporting fighters inside of Ukraine, all it needs to do is send more covert aid. The West is already accusing Russia of allowing armored vehicles to move over Russia’s border with Ukraine – what else could Russia do then that would constitute an outright “invasion?”
At any point of the conflict, if Ukraine’s provocations are not obvious enough, Russia will not benefit from crossing the border into Ukraine. Russia’s restraint thus far has exposed the West’s “responsibility to protect” (R2P) doctrine as dressed-up imperialism. Surely if ever a conflict warranted “humanitarian intervention,” it would be Kiev’s assault on eastern Ukrainians with warplanes, tanks, and artillery – indiscriminately shelling populated centers to compensate for the lack of capable grounds troops necessary to more precisely and safely engage with anti-Kiev fighters. That the West is not only failing to condemn this, but encouraging it, lays R2P to rest as cover for unilateral, global military aggression.
For Russia to likewise cite R2P would be to legitimize this otherwise dubious policy, and even normalize its use elsewhere around the world.
For many reasons Russia will not benefit from invading Ukraine, and for many more reason, NATO and the EU would benefit from it – at least rhetorically. The Russians are therefore likely to resist provocations by Ukraine to cross the border and give NATO further excuses to meddle in Eastern Europe. Instead, Russia will allow Kiev to continue displaying its brutality and incompetence on the battlefield while eastern Ukrainians continue picking apart their forces. Meanwhile, economic pressure will continue undermining the regime in Kiev even amongst its supporters in western Ukraine.
The clock is ticking and an outright military victory over Kiev’s forces is not necessary for eastern Ukrainians to achieve their goals. Conducting a confounding guerrilla campaign against Kiev will time out the clock until either mutiny or economic pressure gets the better of the regime and attempts to push eastward to consolidate its power will become an impossibility.
Tony Cartalucci, Bangkok-based geopolitical researcher and writer, especially for the online magazine “New Eastern Outlook”.

Coup d'Etat in Ukraine: Bias and Hypocrisy of the Western Liberal "Left" MediaWestern media’s coverage of the Ukraine crisis has reached epic proportions of bias and despicable hypocrisy, and once more, the western liberal “left” media spectrum is busily laying the groundwork for Imperialist-friendly narratives. Having last year  no-platformed  a Syrian ...

US-EU Sanctions Against Russia: A Barely Veiled Threat of WarIn his speech yesterday announcing sanctions against Kremlin officials in retaliation for the Russian-backed referendum in Crimea supporting secession from Ukraine and affiliation with Russia, US President Barack Obama said the United States and its European Union (EU) allies ...

Washington Intends Russia’s DemiseWashington has no intention of allowing the crisis in Ukraine to be resolved. Having failed to seize the country and evict Russia from its Black Sea naval base, Washington sees new opportunities in the crisis.  One is to restart ...